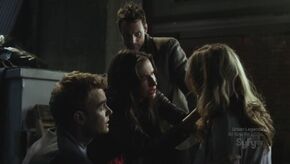 "Wingman" is the fifteenth episode of the third season of Sanctuary, and the forty-first episode overall in the series.

Will and Henry's double date goes awry when Magnus insists they do a straight-forward delivery of an Abnormal on the way to their dinner reservations.

This episode is a "clip show", meaning it consists largely of scenes from previous episodes.

Henry and his girlfriend, Erika, are preparing for a romantic dinner at Alfredo's. They run into Will and Abby in the hall, and it turns out Henry and Will both made the reservations under Dr. Magnus' name. When the men move aside and start to argue about whose date is more important, Henry reveals to Will that he is going to propose to Erika.

Will is very surprised by Henry's decision to marry Erika after dating for a week and a half. Just when the girls intervene to tell them that they are willing to turn the evening into a double date, Magnus arrives and orders them to deliver an Abnormal, a lepidoptera, to the docks. She cannot do it herself, as she has to monitor another Abnormal's birth.

In the car on the way to the harbor, Abby asks if Magnus will be okay on her own. Henry and Will are amused, and remember a number of fights their boss has gotten into [ with Adam Worth in "Breach", with the vampire squid in "Next Tuesday", and with the superabnormals in "End of Nights, Part II" ]. They then meet with Ernie Watts, who delivers a large crate with the lepidoptera inside. Once it is in the car, Erika and Henry notice a strange smell; moments later, Abby faints. They stop to get her outside, realizing that she is allergic to the creatures gases. Then, Will points out that if it releases gases, it is no longer in its larval stage. Just then, the Abnormal breaks out of its crate, flies into the open and vanishes into the sewers.

Will and Henry phone Magnus, who explains that the creature hatched because it was not properly transported -- Ernie used a refrigerator. While Henry tries to use Abby's phone, which has a recording of the creature's cry on it, as a way to lure it, Will and Abby make their way into the sewers. Will recounts a number of other cases where they had to go up against dangerous Abnormals [ the Coleanthropus from "Hero", Jack from "Fragments", the giant salamander and the mind readers from "Firewall", the Morrigan from "Fata Morgana", the southern-hemispheric sea scorpion from "Next Tuesday", the insectoid from "Instinct", the basilisk from "Hollow Men", and the energy abnormal from "Haunted" ]. Abby quickly makes him stop, fearing that the knowledge will just make her worry about him.

They continue on their way into the sewers, and Will realizes Abby is trying to find out about his previous relationships. He finally gives in, telling her about Meg leaving him [ in "Fata Morgana" ] and Clara being killed [ in "End of Nights, Part II" ]. When he teases her to tell him about her past relationships, they suddenly run into the lepidoptera. Abby's phone makes a strange noise, spooking the creature, who attacks them and escapes once more.

Abby has twisted her ankle. She and Will turn around to get back to the others. Meanwhile, Henry and Erika have finished the device that is supposed to lure the lepidoptera to them. Just when Henry wants to propose to Erika, the other two show up, spoiling the moment. At this point, they realize that they have no knockout gas, so Abby asks if one of them could make some. Henry recounts a number of cases where his technical abilities helped save the day.

Will and Erika return to the sewers; Will is not quite as convinced that the plan will work, recounting a number of cases where Henry was not quite as successful as he told Erika. At this point, she reveals that she bought an extra ticket, and wants to ask Henry to go to London with her.

Stunned, Will tells Erika that she should talk to Henry about this. Meanwhile, Abby and Henry talk about the latter's Abnormal nature, with Henry recounting the history of how Magnus and the others helped him to make peace with his werewolf nature. Abby asks if she could see him transform, but he explains that he goes naked during that. They quickly change the subject.

Will and Erika discover that the lepidoptera is shedding the last of its old skin. At that point, Henry activates the luring device, causing the creature to come out of the sewers and violently attack the van with Abby and Henry inside.

They stop the sound, realizing that the sound they used was one that was that of an aggressive male. Will phones Ernie and makes him send them the file with the female sounds, causing the creature to calm down and approach Will peacefully.

Some time later, Henry and Erika finally tell each other what they want; they realize that their relationship will not work out, as neither is willing to give up his or her life for the other. After one last kiss, Erika leaves the Sanctuary, and all Henry can do is promise to visit some time.

Will brings Abby a new pair of shoes. When he asks what to do next, she clears his desk, and they start to make out.

A sad Henry walks through the Sanctuary's halls when Dr. Magnus shows up, asking him to help her with something: it turns out that she made Alfredo's deliver to her home, something the restaurant never does for a normal customer. While they are eating, Will and Abby show up -- half naked -- and steal some of the food. Henry is outraged at this act of theft, but Magnus only smiles at him.

Mothman
Add a photo to this gallery

Retrieved from "https://sanctuary.fandom.com/wiki/Wingman?oldid=16959"
Community content is available under CC-BY-SA unless otherwise noted.