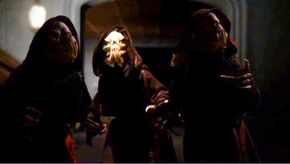 "Webisode 8" is the eighth episode released online of the original Sanctuary Web Series.

Magnus, Will and Bigfoot defend the Sanctuary against a deadly assault, while Ashley struggles to survive her encounter with a nearly unbeatable foe. ● Cliffhanger ending ●

Across the river from Old City, Ashley Magnus is in New City tracking an Abnormal in a dark office space belonging to 'Aubanel, Wood, Smith, Attorneys At Law'. While walking through the office, her quarry comes out to confront her; it’s a tall man in a business suit. Ashley is overconfident that she can take him on alone despite the man warning her that she should have listened to her mother about trying to kill him. After Ashley’s LRAD fails to fire, the man maneuvers quickly and silently around her, eventually jumping onto a desk next to her with his body now transformed into that of a Vampire. He then knocks Ashley down by hitting her across her head with his fist, stating that he’s “Way beyond bad!”.

At the Old City Sanctuary, Keepers of the Dead are storming the property. Helen and Dr. Will Zimmerman are running down a hallway. As they pass under an archway, Helen stops to hit a hidden button that shuts a large metal security door just behind them that shunts the hallway closed. More Keepers are seen invading the interior of the Sanctuary.

In the foyer, Bigfoot appears from the elevator and begins to fight Keepers.

Helen and Will make their way to a security keypad hidden behind a painting in one of the hallways. Helen uses it to try to put the Sanctuary into lock-down, but the device fails to cooperate. Helen then radios Henry Foss who’s currently down in the lab, cradled on the floor in pain next to The Morrígan's holding cells. Helen asks him to get the security protocols for the entire facility operational immediately, but he can’t as he’s currently being affected by the witches. Helen then sends Will to go help Henry while she continues to deal with the Keepers. As she turns away, Helen grabs a small statue sitting on top of a nearby side table and uses it to stab a Keeper to death. She’s then saved from another Keeper by Bigfoot knocking it out of the window behind her. Bigfoot tells her that they need weapons, and Helen responds that they need Ashley.

Back at the law firm in New City, Ashley is currently getting thrown around the room by the vampire. Eventually he stops to pick her up, giving Ashley the perfect opportunity to stab him in the groin with a cylindrical silver stake. Ashley pushes herself away from the vampire, landing on the floor and instantly preps for the vampire to retaliate. However, Ashley’s attention gets distracted by her watch beeping and flashing a red “911” message, allowing the vampire to quickly disappear from the room unseen aside from a moving shadow on a far wall.

At the Sanctuary, Will takes the elevator down to the lab, watching the Keepers moving on several different floors as he travels past. Seeing dangerous odds mount against him, he questions his recent career move to join the Sanctuary.

Ashley is seen rushing home on her motorcycle across a bridge that connects Old City and New City.

Helen and Bigfoot are now in the Sanctuary’s foyer; Helen shoots the Keepers, while Bigfoot tosses them around. As more and more Keepers arrive at their position, they become continuously outnumbered. As Helen starts to run out of bullets, they decide to fall back to the kitchen. Once the swinging door is shut, they try to lock themselves inside by Bigfoot taking a large wooden beam and placing it across the door frame to lock and reinforce the door. The Keepers however are able to easily break a hole through the wooden door.

Outside, Ashley has finally arrived home and stops at the Sanctuary’s front gate. She inputs her access code a couple of times, but it doesn’t work. Ashley is now locked out and tries to think of a way to get inside the Sanctuary.

Down in the lab, Henry’s fixing the computer console. Will shows up to convince The Morrígan they weren’t evil, that they were made to stop wars until Merlin brainwashed them. Just as Will makes progress, Henry gets the Sanctuary’s lock-down protocol activated, shutting the large protective metal shield doors around The Morrígan’s cells. Will yells at Henry to unlock them, but Henry refuses.

In another part of the Sanctuary, Ashley pops up from the river gate entrance, shooting the Keepers who were standing around the edge.

In the kitchen, Helen radios Henry for a status update as Bigfoot moves a large heavy cabinet in front of the failing door. Henry informs her that the abnormal cells are secured but the upper levels and the lab are still vulnerable. He also tells Helen that Will wanted to let the witches out, to which Will takes to radio to tell Magnus that he was getting through to them. Helen has no time for the discussion though as the Keepers are now starting to bust their way into the kitchen. Helen orders Will and Henry to protect the lab at all costs and to forget the rest of the Sanctuary as they are about to be overrun with Keepers. Magnus also orders Will to find Ashley.

In the process of Will and Henry trying to figure out a way to contact Ashley, Ashley coincidentally gets in touch with Will and Henry through the radio to inform them that she’s in the building and working on taking out Keepers. She’s then seen running through a hallway shooting several Keepers dead and makes her way down a set of stairs. She very quickly runs out of bullets and has to resort to using hand-to-hand combat. Unfortunately, she becomes quickly overwhelmed by the Keepers.

In the kitchen, Helen and Bigfoot shoot and fight Keepers to the best of their abilities, but they too also quickly become overwhelmed by the Keepers.

Down where Ashley is, Ashley is now seen crawling on the floor to then be dragged away screaming by Keepers.

In the lab, Will and Henry are revealed to be the only ones left still standing in the Sanctuary and receive no response to their calls over the radio from either Ashley or Magnus.

In the kitchen, Bigfoot and Magnus are seen lying bloodied and completely unresponsive on the floor.

The Keepers are now seen making their way down into the lab to The Morrígan’s holding cells. They find that the Abnormal cells have been lifted from lock-down and that the cells that held The Morrígan are now open and empty, with The Morrígan and Will nowhere to be seen. Henry is found lying unconscious on floor next to the computer console. Seeing that The Morrígan are gone, the Keepers let out an angry screech.

Retrieved from "https://sanctuary.fandom.com/wiki/Webisode_8?oldid=21105"
Community content is available under CC-BY-SA unless otherwise noted.