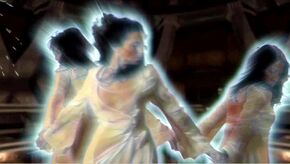 "Webisode 7" is the seventh episode released online of the original Sanctuary Web Series.

Will falls victim to the three women's growing powers, while Magnus seeks proof of their true identities via a former resident of the Sanctuary. Ashley's luck in her monster hunt begins to run out...

The Morrígan are floating rotationally in the Old City Sanctuary's Main Lab. They begin to cause a lot of damage to the Sanctuary, stirring up a lot of wind that flings paper and objects around, and cause a massive amount of electrical shortages that fry systems and lightbulbs; spraying sparks everywhere. The Morrígan also give Dr. Will Zimmerman and Bigfoot (who’s just returned from driving Dr. Helen Magnus to see Terrance Wexford) a light amount of brain damage that causes them to fall to the ground in severe pain that eventually renders Will unconscious. The women are only stopped once Helen shoots them down with a type of custom energy weapon that resembles a heavily modified futuristic type of shotgun.

Time advances a little to Helen tending to Bigfoot’s injuries. Will then meets Henry Foss for the first time, as Henry shows up as tech support for all the destroyed lab equipment. Will gets Henry’s brief backstory before Magnus sends him off to continue to fix her lab. As Bigfoot gets cleared, Helen calls Will over for his checkup.

The unconscious Morrígan have now been placed in their own individual cells down in the open medical lab. Helen and Will talk as she finishes his checkup, sighting no permanent sustained damage and that Will should be fine. Will admits that he still has trouble accepting that they are 1200 year old witches, which he believes is not something Magnus wants to here. Will then elaborates, sighting the reason behind why they were even found was due to Helen searching for elixirs that could possibly hold the key to granting her a normal lifespan. Helen sees this as a personal attack and decides to reveal to him that for her, longevity is not a gift, but a curse; that living forever takes the meaning out of life. At Magnus' warning that Will needs to be careful around these women, Will decides to take his leave, still refusing to believe that their sole purpose is to kill men despite him having personally been on the receiving end of their powers just a little earlier.

After having just left Magnus, Will makes his way into the Sanctuary’s kitchen. Here, he walks in on Ashley Magnus sitting in the dark by herself performing first aid. Will sees her condition and decides to help clean up her leg wound. When Ashley feels that he’s helped enough, she decides to stand up to leave. However before she can even take a step, Will offers his psychiatrist services again, pressing Ashley that she would feel a lot better both physically and emotionally if she just talked to him about her issues surrounding her father. This annoys Ashley greatly, so much so that she grabs a hold of and intentionally crushes Will's hand in hers; standing just close enough to make Will uncomfortable as he listens to her softly spoken statements of the pleasure she feels when she takes down a ghoul, and that it’s a lot more cathartic than talking on a couch. Ashley’s actions make it clear for him to know to back off, and she proceeds to release his hand and to leave the room, leaving Will behind to cradle his now pain-filled hand.

Will then visits with the three witches who are now standing awake at the front of their cells. With Will still refusing their true past, Danu teaches him a lesson with her power, melting Will’s brain a little bit causing him to fall to the floor in pain. As she does so, she reminisces about how the three of them were the sole reason behind the deadly outcome of the battle at Baden Hill; that they were the destroyer of men. Will then passes out as Danu makes it clear to him that she remembers for certain who she is.

Some time passes and Helen is seen checking in on Will in his office, who is now laying down on his therapy coach. At this point Will finally concedes to Helen that they truly are witches and asks for her guidance as to how to deal with them. Even though Will now accepts their identities, he still doesn’t accept them to be bad people, being that they were initially kind before he jogged their memories of Baden Hill. At the mention Baden Hill, Magnus becomes a little bit confused as from what she learned from Wexford was that that was the site of the last battle that handed control of Britain over to Arthur, meaning that the men who died were Saxons, not Britons. Will also becomes confused as The Morrígan were initially created by Morgan le Fay to be Arthur’s enemy, wondering why they would now help him. Magnus voices that maybe they had no choice.

Helen and Will are then seen in the Sanctuary’s library. Questioning Morgan le Fay and Arthur’s rise to power, citing that feminine energy historically does not seek to dominate, but to instead restore harmony to the world. Helen points out that of what they know of Morgan le Fay is revisionist history initially crafted by men to paint her as an evil sorceress. Helen believes that the Morrigan were created by Morgan le Fay to possibly slow Arthur’s rush to power, as he wanted total control over Britain. Helen shows Will a record of Arthur’s battle, to which Will heavily questions how a person who’s lost half his battles could ever rule with such a poor win-loss history.

Down in the lab next to where the Morrigan are being kept, Henry is repairing a damaged computer console. Danu calls for his attention, and once he turns around, Danu can now painfully affect Henry’s mind just like she did Will’s earlier. In the hallway with the 3 women.

Back in the library, Helen and Will continue to look over the details of Arthur’s battles. Most of his early battles were lost with very few casualties where most of his men simply stopped fighting. The pattern changes at Badon Hill where Arthur’s enemies were wiped out en masse, most dying without a single mark on them. Helen then concludes that Merlin must have recognized The Morrígan’s power, and decided to brainwash the three women to do his bidding instead of Morgan’s; forcing them to kill Arthur’s enemies to hand Britain over to him. Merlin then has The Morrígan locked away in case they are ever needed again. As the Keepers of the Dead are figured out to be an incorruptible army created by Merlin to make sure that The Morrígan are never free again, Keepers attack the Sanctuary, busting through the windows of the library.

Helen and Will immediately leave the library and are seen running away to safety down one to the Sanctuary’s long corridors. Outside, several Keepers are seen climbing up the Sanctuary’s perimeter walls.

Retrieved from "https://sanctuary.fandom.com/wiki/Webisode_7?oldid=21104"
Community content is available under CC-BY-SA unless otherwise noted.