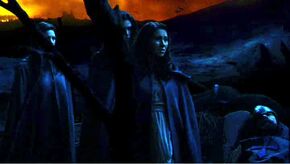 "Webisode 6" is the sixth episode released online of the original Sanctuary Web Series.

The investigation into the three women found in the crypt continues, confirming Magnus' theory that they are much more than they appear. Ashley's hunt for contraband creatures yields mixed results.

Gregory Magnus is sitting at his desk in his study when an adult Helen walks in to sit down in one of his chairs opposite her father. Helen is upset that the Royal College has revoked her father's membership considering how much her father has contributed to the college's advancements. Another reason for Helen visiting her father that night is that the Royal College has just rejected her for the third time (mostly due to her being Gregory's daughter), despite her having the highest possible marks on the entrance exam that the professors have ever seen. Gregory is beside himself, commenting that Helen already knows more than the doctors administering the exam. Helen becomes frustrated at the fact that she knows that she can not legally practice medicine anywhere without a degree from a London school, and adamantly refuses to take the exam yet again. She also decrees that she won't stand for having to live a life full of mediocrity and subjugation. After a moment of thinking, Helen rises from her seat to beg her father to teach her, being as he is the most able medical researcher that she has ever known. Gregory warns her that his work is unorthodox and should not be entered into lightly nor with anger. Helen continues to plead with her father, asking that if he sees potential within her for him to help her achieve it.

Gregory contemplates her request, eventually giving in because he recognizes her talent and partially due to Helen continually being blackballed because of his hidden work. Gregory then leads Helen down the stairs to his laboratory located in the basement underneath their residence. Before he opens the door, he warns Helen that she can never go back after seeing what is beyond the door once it is opened. Gregory pauses for a moment and then opens the door, allowing Helen inside to see and hear the abnormals within the dark room.

Now in present day Old City at the Sanctuary, all three of the women (Danu, Tatha, and Caird) are in a session with Dr. Will Zimmerman in his office. Caird basically repeats what Danu told Will when she woke up, being confused about her surroundings and that she has no memory besides recognizing herself and her sisters. Will again pushes his personal belief on the three women just like he did earlier with Danu about their memories being false, that they can't be 1200 years old, and that they wouldn't be able to speak to or understand each other. Danu becomes none too pleased with Will, agreeing that the truth will come out eventually, as it always does.

Down in her lab, Helen finishes her autopsy on the dead Keeper just as Bigfoot brings Helen a tray of food. They briefly look at the monitor behind Helen to watch Will in session with the three women. Bigfoot admits that they give him a bad feeling. Helen then informs him about what she has learned from her autopsy on one of the keepers. Her priority concern stemming from her autopsy results is whether or not the creatures may be intentionally genetically altered; not due to natural selection. Helen then shows Bigfoot the ring she found on one of the keeper's hands. As he looks at it, he can tell that it's very, very, old. Helen then asks Bigfoot to give her a ride later in order to check the ring with a source of her's.

Up in his office, Will performs hypnosis on Danu to help try to recall some of her memories. She remembers crypt keepers abducting the three of them and putting her in some green liquid. Will asks her to think back further, to which Danu then remembers her and her sisters being in a field with dead people all around them.

In an unknown location somewhere outside of the Sanctuary, Ashley Magnus is currently seen in a cavern stalking her prey with a shotgun. An invisible/cloaked creature then starts to attack her, causing her to shoot blindly. The shotgun proves ineffective and the creature then pins her down with it. Ashley struggles to keep the creature off of her, eventually reaching into one of her pockets to pull out a stunner and stuns it to death. Ashley shoves the now lifeless creature off of her and then pulls out and unfolds a sheet of paper, checking the dead abnormal off her list.

Back in the Sanctuary's infirmary, the three sisters wake up from their beds, realizing that the field of dead men Danu saw earlier is a real memory, not a dream or a delusion. As they get out of bed, they remember that they were the reason behind the men dying. The three women then come together and walk out of the room, imposing the scene of the battlefield on the room.

In his office, Will becomes distracted from his files while sitting at his desk. He looks over to his coffee mug and watches the coffee inside starting to shake.

Parked on the street in front of a building located presumably in Old City, Bigfoot is seen sitting in the drivers seat of his car having fun while reading his book as he waits for Helen to return.

Inside the building, Helen is in a meeting with Terrance Wexford. Helen hands him the keeper's ring and Wexford says that it’s at least 1000 years old. Eventually he pulls out a 5th century tapestry with the same symbols that are seen on the ring. On it, he describes that the symbol is that of the Cabalis Nocturnum and that some of these warriors were rejects from Arthur's court who are seen on the tapestry desperately wanting to drink out of Merlin's chalice to show loyalty. Wexford then describes Merlin's nemesis, Morgan le Fay, and that she created The Morrígan; witches to do her bidding.

Back at the Sanctuary, Will rushes down to the main lab past Abnormals that are highly agitated. Will comes to a stop near the center of the main lab to look up and see the three women floating above him in the air, revolving around in a circle while holding hands.

Retrieved from "https://sanctuary.fandom.com/wiki/Webisode_6?oldid=22119"
Community content is available under CC-BY-SA unless otherwise noted.