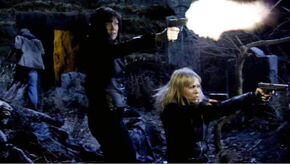 "Webisode 5" is the fifth episode released online of the original Sanctuary Web Series.

While investigating an ancient crypt on a remote island, Magnus and her team encounter deadly creatures and three women with a mysterious past. Ashley decides to address the issues of her father's existence head-on.

A young Helen Magnus is sitting on the floor next to the wall just outside of her father’s study. She’s listening in to her father Gregory Magnus with two other Victorian era doctors warning him that the medical board is running out of patience with him and his work. Gregory defends his work, saying that the board has a closed-minded imagination, that with his work, they are on the verge of unlocking scientific secrets. The two other doctors remain ignorant though, saying that they can’t accept his hysterical and outlandish case studies as fact. The two men then decide to take their leave, dismayed that Gregory may tragically lose his license if he continues down his current path, as they see how talented he is. One of the men addresses Helen as they walk out of the house.

As they leave, Helen stands up and walks forward to her father who’s now standing just outside of his study’s doorway. Gregory apologizes for her having to hear their conversation, to which Helen wonders why they (other doctors from the board) are always so angry at him. Helen presses to know what her father has done as she understands the seriousness of those men meaning to end her father’s career. Gregory continues to try to placate his daughter, telling her to put it out of her mind. With Helen still pleadingly insistent, he turns away and walks back into his study, apologetically saying “I can’t” just before closing the doors to his study.

Cut to present day Oilean of Arracht, an island in the North Sea located one hundred miles off the coast of Scotland. Helen, Ashley Magnus, and Dr. Will Zimmerman are found hiding in the island's graveyard; their objective being a crypt potentially containing an elixir that is capable of prolonging life for centuries. A talkative clueless Will questions Magnus about this location being the right place and as to why they are currently hiding as it's just a crypt, not the Pentagon. Helen hands him her telescopic lens to see Keepers of the Dead guarding their target. Helen and Ashley communicate with hand signals; Ashley wanting to go straight in and Magnus wanting her to go around. The group then moves forward into position. Before Will can distract the crypt keepers away, the keepers attack. During the fight that's mostly filled with Helen and Ashley shooting keepers, Ashley hesitates when one of the keepers grabs her from behind and puts it’s hand over her mouth, reminiscent of how John Druitt did the same thing to her when he abducted her.

As the three of them regroup to a position they can hold out from in front of the crypt's entrance (Ashley and Magnus not liking information about a hostile encounter being left out of Ernie Watts' intel about the place), Magnus tells Will to go to the crypt. Once in, he walks down the stone steps towards three stone coffins (each separated from the other by a 120 degree angle) around a central circular design. Will walks forward and stands on the inner design, causing green liquid to drain from the tombs. When the liquid reaches the center of the design, the tombs simultaneously open to reveal three alive, but asleep, women inside. As the barrage of keepers becomes manageable for one person to hold off, Magnus leaves Ashley to check in on Will, finding him couched down beside one of the coffins, looking in on one of the three women.

After the opening title sequence plays, the group are now seen back at the Old City Sanctuary. Will is on his cellphone trying but failing to get in touch with the same man whom Will has missed his call five times so far due to his recent trip to Scotland. Will ends the call just as the elevator he’s one comes to a stop, opening its gated door to a standing and waiting Ashley. As they exchange places, Will offers his psychiatrist services to Ashley, letting her know it’s okay if she wants to open up about everything she’s going through with knowing about her father. To this, she annoyedly declines his offer and then proceeds to flip the switch on the elevator to go back up.

Will makes his way over to Dr. Magnus who’s in her open medical lab running tests on the three comatose women, each now lying on a gurney attached to an IV drip of a blue liquid. Magnus informs Will of what she knows about their physical condition so far and her efforts to wake them with a timed-release stimulant. Magnus then moves over to the dead crypt keeper lying on a movable table. She removes the external skull helmet from the keeper, fascinated by the fluid she finds underneath. She offers Will the opportunity to help her gather fluid samples, but it disgusts him, forcing him to decline in order to more preferably go back up to his office to prepare for when the women wake up.

At an unknown location in Old City, Ashley walks out from behind the corner of a build to walk down an alleyway on the lookout for any activity. She looks up to see a threatening abnormal clinging to the side of a brick building, raising her arm to shoot at it with a type of electronic gun. The prototype weapon fails to fire and the abnormal jumps down on top of her, knocking her to the ground. The abnormal turns out to be Steve (a Sanctuary resident), the whole encounter being a test for the sonic weapon in Ashley's hand. Ashley calls for Henry Foss, who walks out and over from the original location of where Ashley had come from. Henry adjusts the weapon and is successfully able to fire it, breaking off pieces of brick from a building. With this being the weapons damage output on its minimum setting, it makes Steve uncomfortable at being the weapon's intended test target. Ashley and Henry discuss the current state of readiness of her usual weapon arsenal, to which Ashley isn’t satisfied and gives him a Friday deadline for when they need to be ready. As Ashley walks off, Henry figures out that Ashley plans to go on an unsanctioned abnormal kill behind her mother’s back.

Back at the Sanctuary, the three women have been moved to the infirmary. One of the women stirs like she’s having a bad dream and then bolts upright, screaming wide awake.

Will’s in his office on the phone with his boss from his previous job, making sure that his resignation papers were processed. During the call, an abnormal hidden behind Will’s bookshelf knocks off some of his stuff. Will’s boss hangs up on him before Will can ask for his recommendation. Bigfoot quietly comes into the room to tell Will that he’s needed in the infirmary; Will grabs his white Dr.’s coat on his way out of his office.

Will greets the newly awake women in the infirmary; Helen down in her lab performing an autopsy on the keeper turns around to briefly watch Will on the monitor behind her before turning back to her work examining the keeper's hand. The woman suddenly leans forward to grab a hold of Will, pulling him close her. After she releases him, she introduces herself as Danu and the two begin to talk. Danu's confused about her strange new surroundings and is scared about not being able to remember anything. Eventually she reveals to Will that the last thing she can remember is mourning the loss of her priest to the Miasmas, a sickness affecting many villages around her.

Up in Ashley’s bedroom, she’s packing her motorcycle saddle bags with weaponry and other items. Helen having just been told by Henry over the phone, walks into her room to dissuade her from doing something that’s incredible dangerous. As Ashley fights back with her mother, Helen realizes that she’s doing it as a confidence builder to overcome the fear from Druitt holding her prisoner. Helen doesn’t believe that going on a hunt for contraband list abnormals is the appropriate action to take, believing it to be a suicide quest. Ashley on the other hand sees herself worthless if she can’t overcome this new fear. Ashley walks out of her room with gear in hand as Helen strongly urges “Please don’t do this.” Ashley is then seen leaving the Sanctuary property like a bat-out-of-hell on her motorcycle while riding through rain.

Helen is now back down in her lab, recording her verbal notes as she continues to perform her autopsy on the Keeper; she's now moved on to dissecting it's abdomen. Will walks in to discuss with Helen the information he gained from Danu. From Will’s research into the history of the area of where Danu is from, he finds that the last time the Miasmas had a significant outbreak occur in Scotland was back in 800 A.D. Will’s denies a person being able to survive that long, instead believing Danu to be a normal, yet delusional, woman. Even if he accepts the 1200 year old “magic bath products” theory of the green elixir keeping them alive, Will still disagrees with the possibility of it based on the fact that she wouldn’t be able to speak and understand the same vernacular of English as they do. Magnus however wants to focus on the bigger question of why these women were being anxiously protected by the keepers; why the keepers want to keep them hidden.

In the infirmary, all three women are now awake. The two women still in their beds reach over the sides of their beds to join hands. The woman in the left bed then reaches to join her hand with Danu who’s standing on her right. Once all three of the women are physically linked together, objects on a nearby medical cart behind Danu start to rattle and shake.

Retrieved from "https://sanctuary.fandom.com/wiki/Webisode_5?oldid=21102"
Community content is available under CC-BY-SA unless otherwise noted.