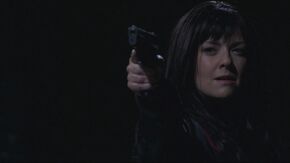 "Webisode 4" is the fourth episode released online of the original Sanctuary Web Series.

Magnus and Will confront John Druitt with deadly results for a member of the Sanctuary team. Ultimately, Will is forced to choose between his old life and the strange world of Dr. Helen Magnus!

At the underground abandoned 98th street Subway Station in Old City, Alexei is sitting on some steps playing with a marionette puppet while Ashley is being held hostage by Druitt, her father. Ashley struggles to try to free herself, failing to make any progress. Druitt tells Ashley of his century’s worth of searching and spending all of his resources in order to find her, how in every decade he was continually disappointed to find that Ashley hadn’t been born yet, until now. When Ashley tells him that her father is dead, Druitt becomes enraged at learning that Helen had kept her from knowing her own flesh and blood. Druitt rushes toward Ashley with his cane above his head as if he’s going to strike her, yelling out “Who is she to say…!” but is suddenly stopped in his tracks by Helen running into view loudly declaring: “I’m her mother, that’s who!”.

After the opening title sequence plays, Will and Bigfoot are crawling through an overhead maintenance duct. They stop just above the room where Ashley, Druitt, Helen, and Alexei are, looking down on the conversation taking place below.

Druitt greets Helen, complimenting her wonderful appearance. Helen’s not in the mood for platitudes though, and tells him to stop playing games as he now has what he wants: a family at last. Druitt tells Helen that playing her cards very patiently wasn’t enough to stop this moment from happening. Ashley believes that Druitt is crazy, voicing out loud for her mother to tell him that there’s a nice padded cell in his future. Helen quiets her child to then address Druitt about not being able to tell her due to him murdering eight innocent women.

Above them in the maintenance tunnel, Bigfoot wants to open the air vent to go down there, but Will stops him, telling him to wait.

Ashley is now desperately waiting for her mother to tell her that Druitt being her father is a total lie, but all her mother can do is give her an apologetic shake of her head. Ashley tearfully pleads with her mother one last time, but the only response she gets is Helen addressing Druitt with “Please, this is neither the time, nor the place” to reveal such sensitive information to their daughter.

Druitt then reaches down to yank Ashley up out of her chair to stand next to him. This causes Helen to raise her gun at him, fearful that Druitt is going to hurt Ashley. Druitt responds that it’s actually Helen who’s going to do the hurting, proceeding to give her two options. He offers up their daughter, whom he criticizes Helen for raising as “a foul-mouthed, willful, violent child; but at the core, a needy little girl who just misses her dad” before placing a kiss to the side of her head and shoving her to sit back down in the chair. His next offer is Alexei, “And this, your beloved creatures, the damned souls you so tirelessly try to save.” He then tells Helen to “MAKE YOUR CHOICE!”

Sensing Ashley’s fear, Alexei’s appendage starts to respond. Will and Bigfoot continue to watch events unfold from above. Due to the imminent threat to her daughter, Helen non-fatally shoots Alexei. Druitt then teleports over to Helen, and Will spontaneously falls to the ground in front of where Ashley is sitting, scaring Ashley in the process. Druitt walks into Helen’s pointed gun, pushing her backwards, and then rapidly disarms her, quickly moving behind her and putting his rapier blade to her throat.

Alexei recovers from being shot, his appendage now agitated. Will helps Ashley up from her chair to move her a safe distance away from the boy and then proceeds to try to calm Alexei.

Helen asks, “What now John, I die like one of your whores?” while she secretly maneuvers in her left hand a hypodermic needle syringe that was hidden up her leather jacket’s sleeve.

Alexei claims that Will wants to hurt him, to which Will denies, saying that he wants to help him. Alexei asks “Why?” to which Will responds with “Because there’s no such thing as monsters”. This statement completely calms the boy, retracting his appendage. Relieved that he was able to get through to him, Will walks over and puts his hand on Alexei’s shoulder.

Bigfoot suddenly appears after climbing down a ladder from the maintenance tunnel above. As he makes his way over to help, Druitt lets go of Helen to teleport behind Bigfoot, putting his fist through the right side of Bigfoot’s abdomen in the process. Druitt then rips his arm out of Bigfoot’s body and Bigfoot falls to the ground.

Druitt’s psychopathic enjoyment is cut short when he starts to become affected by the liquid that Helen was able to inject into him before her left her side; the needle syringe still stuck in John’s left leg. Helen asks for him to forgive her, Druitt’s only response is that Helen can’t control Ashley forever (possibly believing that Ashley would one day seek out and want to be with her father against her mother’s wishes). Druitt then teleports away against Magnus warning him that he would never survive it.

After Druitt disappears, the entire group of people left standing move forward to check on Bigfoot’s condition, Helen and Ashley kneel down next to him on the floor, both in tears from the events that just transpired. Helen then brushes her hand against the back of her daughter’s head in comfort.

Now back at the Sanctuary, Will visits Bigfoot who’s in recovery. Will talks to Bigfoot about his fear of him as well as his now acceptance of him, even though he believes Bigfoot to be sleeping. As Will walks away, Bigfoot begins to admit to Will that what Will believes to be his over-imagination as a child, is actually real, as Bigfoot provides with exact details of Will’s childhood home address. He says that before he met Dr. Magnus that he was very angry, and enjoyed scaring people; children in particular. Bigfoot confesses that he knew that that “Bigfoot” movie was playing that night and intentionally went to Will’s house to scare him. Bigfoot then says he’s sorry and asks for forgiveness, extending out his hand. Will accepts his apology and takes Bigfoot’s hand into his.

Sometime later that night, Ashley brings Will to the Sanctuary’s library to view a message from Magnus’ previous protégé, Barney, that’s addressed to her new protégé following after him. Barney reveals a strikingly similar way of how she recruited him that's almost just like how she recruited Will; Helen recruited Barney in his first year out of medical school in ‘1932 or something’, walking out of the shadows to hand him her business card, and from then on he was stuck in her web. Ashley then fast forwards the message past his ramblings to his advice to the "new guy" about how hard being her protégé is, but that it’s worth it to know the truth.

Will walks into Helen’s office, who’s sitting at her desk writing. She asks if he’s leaving, and he says yes, declining her job offer. Will lingers from leaving just yet, finding this to be a good moment to confront her about how any of what just happened is possible, especially her being alive all of this time since at least the late-1880's if Druitt “Jack the Ripper” was her first patient, and how Ashley is her daughter. Helen reveals her true age, being 157-years-old, and that she kept Ashley frozen as embryo for almost a century until she could bare the loneliness no longer, underestimating John’s determination. Now knowing that Helen is not normal, it answers all of Will’s questions. With this new revelation, it prompts him to want to stay, asking Helen to make him a promise, to which she can only offer him the adventure of many, many, lifetimes. She then asks him with a smile, “Shall we begin?”.

Retrieved from "https://sanctuary.fandom.com/wiki/Webisode_4?oldid=21101"
Community content is available under CC-BY-SA unless otherwise noted.