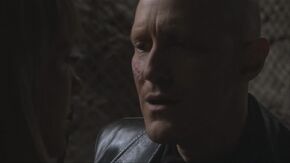 "Webisode 3" is the third episode released online of the original Sanctuary Web Series.

The origins of the mysterious mutant boy are revealed, as is the relationship between Magnus and her old flame, John Druitt. Meanwhile Ashley Magnus seeks out Ernie Watts a weapons dealer and fellow monster hunter - only to find herself in mortal danger.

At the Sanctuary, Ashley is in the infirmary receiving stitches from her mother after she took a strike from Alexei’s appendage earlier that night to her right shoulder blade. Will is also nearby sitting on an adjacent bed with a cold compress to treat his head. After Ashley gets patched up and leaves to meet Ernie across town on the east side in 20 minutes, Will questions the apparent 12 year physical age difference between mother and daughter. Will then picks up an irradiated fluid sample that Dr. Magnus collected earlier that night from her autopsy of one of the victims. Will freaks out and puts the sample back down when he finds out that it contains some trace amounts of low-grade plutonium.

After the opening title sequence plays, Helen and Will are standing in an observation room looking down upon Alexei, who’s strapped into a metal chair; his appendage freely whipping around violently. Helen relays to Will her current knowledge of the boy’s background. She then assigns Will to work with Alexei.

Bigfoot and Will enter into Alexei’s cell, in an attempt to get him to calm down and to trust them. Bigfoot leaves the room after undoing the chairs restraints, leaving the two of them alone together at Will’s request. Bigfoot then takes Magnus’ place in the observation deck as she leaves the room.

Dr. Magnus is now down in the main lab, running a trace analysis on the plutonium sample found in the liquid produced from Alexei’s appendage. Results reveal a location match to Chernobyl. Helen then reaches over to pick up and look at the “Twelfth Night” flyer that John left for her down in the city’s underground catacombs.

Helen reminisces about her romance with John back in London in the late 1880’s, having just left that exact same play; John’s favorite. They get in a carriage, Helen telling the driver to take a turn through Piccadilly first. John wonders where Helen is taking him and Helen replies with “Where ever I please. I’ll not have you home before midnight, John Druitt. Not before I’ve had my way with you”. John thanks Helen for tending to his chronic illness that he sustained after the injection of the Source Blood and finds it the perfect time to profess his love to Helen, proposing to her right then and there, promising to make her happy, for all eternity. Helen accepts his proposal with a kiss and John places the engagement ring on her finger.

Bigfoot walks up behind Magnus in her lab as her memory fades, putting his hand on her shoulder to pull her attention away from her station as she needs to see the no-so-very-well progress of Will trying to work with Alexei. Will is eventually able to calm Alexei down and have him retract his appendage when Will figures out that fear drives the appendage’s motives; the more afraid someone is of the boy, the more it wants to feed on that person’s brain. Will builds a talking relationship between himself and Alexei; Helen watching the scene unfold from a monitor behind her work station in the lab, extremely impressed with Will’s ability of interacting with the abnormal boy.

Across town on the east side, Ashley is meeting with Ernie for a weapons buy. The deal goes south when Druitt suddenly appears, hitting Ernie squarely in the chest with a throwing mace and then proceeds to get into a hand-to-hand combat situation with Ashley. During the fight, Druitt teleports behind Ashley causing her to become surprised; this easily allows Druitt to disarm her from her knife and restrain her, standing behind her back with his hand over her mouth. Druitt then teleports away with her, leaving Ernie alone to self-inject himself with some sort of first-aid pen and to remove the throwing mace from his chest.

Back at the Sanctuary, Will is tucking Alexei into bed in one of the guest rooms upstairs after having just read to him a bedtime story. Alexei thanks Will for his kindness and also mentions to him how another man was also kind to him while down in the tunnels.

As Helen is walking out of the Sanctuary’s main lab, she receives a phone call; it’s Ernie contacting her to tell her that she has a problem; that Ashley has been kidnapped by Druitt.

In some unknown location, Ashley is being held captive by Druitt, sitting in a chair with her hands and feet bound by rope. Druitt offers her some water and the two begin to converse. Druitt then takes his hidden rapier blade out of his cane, using it to unzip the top panel of Ashley’s leather jacket, revealing the silver pendant necklace that Ashley is wearing. Druitt then reveals to Ashley that she is his daughter.

At the Sanctuary, Will meets up with Helen to describe to her the man that Alexei told him he was with earlier, which matches the same man that Ernie described as having abducted Ashley. Will and Helen go to Alexei’s bedroom, finding him gone with directions left behind on his pillow by Druitt to find them at the abandoned 98th street subway station.

Bigfoot then dangerously races Helen and Will across the city in his car through the pouring rain to that location. Helen identifies the man to Will as Montague John Druitt, her first patient. She gives Will a brief rundown of how his power negatively affects him, damaging his brain which drives him to murder, and reveals that he’s her worst nightmare; a nightmare that she now has to confront.

Retrieved from "https://sanctuary.fandom.com/wiki/Webisode_3?oldid=21100"
Community content is available under CC-BY-SA unless otherwise noted.