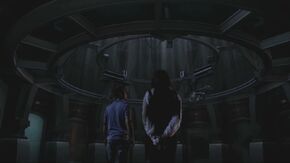 "Webisode 2" is the second episode released online of the original Sanctuary Web Series.

Will Zimmerman is drawn further into Magnus' mysterious world and finds himself confronting his oldest fear. Elsewhere, forces converge on the target of their hunt - including someone from Magnus' distant past.

Down in the underground subway system, a young blonde woman clad in black leather whilst holding a golden gun and flashlight follows an abnormal boy through a subway tunnel from Montgomery Street station all the way to supposedly the next subway platform on the same line. Here, she sees the boy interact with an unknown man who's kneeling down from the platform, reaching to the boy below. Suddenly, an express train barrels down the track from behind her, forcing her to flatten up against the tunnel wall. This causes her to lose sight of the boy and the man, both of which completely disappear by the time the train has passed by.

At Will's apartment, Will is taking a hot shower; the soaking wet clothes he wore from earlier in the night laying around crumpled on the bathroom floor. The bathroom door squeaks open, followed by a toilet flush sending cold water to the shower, forcing Will to turn it off. Bigfoot snaps open the shower curtain, causing Will to faint from the shocking surprise visit.

After the opening title sequence plays, Bigfoot arrives at the front gate of the Sanctuary in a car. He puts down the car's window, inputs the security access code, and then proceeds to drive through the open gate.

At an underground subway station (41st Avenue - 76th Street), a transit worker (Rail Check 2) confronts the unknown man and boy on the southbound platform, telling them that the station is closed. John Druitt turns around and dispatches the transit worker as he radios Control 4, wanting privacy to get to know the boy better.

Back at the Sanctuary, Will wakes up in a guest bedroom, believing that it's a all dream. He jumps out of bed to check out the room which has a lit fireplace and is lined with picture frames of Dr. Helen Magnus through the last century next to prominent historical figures. Helen enters the room, glad that Will is awake, but Will doubts that while starring at a photo of her with Joe Lewis. Will climbs back into bed to continue "sleeping", denying all that he's seen until Bigfoot walks in carrying a tea tray. The sight of Bigfoot causes Will to pass out again.

Underground, Druitt chains up the barely living transit worker from earlier to a metal support beam, encouraging the boy to "fulfill your desires, to heart's content". Druitt has one condition though, for the boy to help him find an "Old Friend". The boy then steps forward and attacks the transit worker with his appendage.

Will wakes up in the bed at the Sanctuary for the second time, on this occasion with Helen sitting in a chair across the room drinking a cup of tea. They discuss her manservant kidnapping him; Will gets angry about it and wants to leave, but not without finding where the rest of his clothes are first. Helen obliges his wish, but gives him fair warning that there are creatures outside the bedroom door that make her manservant look like a house cat by comparison; "Sanctuary For All" is not an empty motto. Will pauses in wanting to leave and Helen proceeds to offer him a scone.

In a subway tunnel somewhere underneath Old City, two transit cops (Blue Rider 9) are walking down the track trying to get in radio contact with the transit worker from before, with no response. While lamenting about working under Old City and discussing where the worker could be, the young blonde woman from before drops down behind them to hide behind a concrete pillar at the side of the tunnel, watching them as they catch sight of the worker's body laying in the track just ahead of them.

At the Sanctuary, Helen takes Will on an elevator ride down to to the lower levels in order to give him a tour of the Sanctuary's Main Lab; viewing some of the Sanctuary's residents in the process. Helen gives Will some background information, aided by all the visual context around them, about what she does for a living.

Up in Helen's office, she explains what the purpose of the Sanctuary is for; to find and help the unfortunate creatures of this world. She then offers Will a job at the Sanctuary, believing that he can provide a vital role.

Across town, a crime scene has been set up around the transit worker's body down in the subway system. Helen and Will are seen off in the distance peering around a corner at the end of the tunnel's track to look at all of the police activity; Helen summarizes that the boy must be close by.

They then proceed to continue walking and end up stepping through a gate to explore nearby catacombs. Helen notices and bends down to pick up a small flyer for William Shakespeare's "Twelfth Night" laying on the ground, flipping it over to read "Act 5, Scene 1" written on the back.

The young blonde woman joins up with the group after tracking the boy all night; Helen's source as to how she knew the boy was down here. At the younger woman's mention of a tall guy being with the boy, Helen asks her to explain. During this, Will catches sight of the boy sitting in an open empty wooden crate. Will gets too close to the boy, barely being missed by the killer appendage due to the young woman suddenly tackling Will out of the way to safety.

Once both Helen and the young woman approach the boy together, after stating that she wants him alive, Helen coaxes the boy out of the box, to which his appendage attacks the young woman on the back of her right shoulder. Will then distracts the boy's attention long enough for Helen to shoot the boy in the back with a tranquilizer dart. The boy falls unconscious to the ground and Helen moves to his side to check on him. After a brief exchange of words between the two women, Helen identifies the young woman to Will as being her daughter, Ashley.

Retrieved from "https://sanctuary.fandom.com/wiki/Webisode_2?oldid=21098"
Community content is available under CC-BY-SA unless otherwise noted.