Start a Wiki
Webisode One 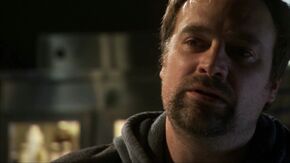 "Webisode 1" is the first episode released online of the original Sanctuary Web Series.

While tracking a young boy with dangerous powers, Dr. Helen Magnus encounters Will Zimmerman, a psychiatric resident who may have what it takes to become her new protege.

London 1888 in the Whitechapel District. Here, John Druitt encounters Molly walking down an alleyway, intending for her to be his next "Jack the Ripper" victim. John is initially stopped from killing Molly by the presence of Dr. Helen Magnus showing up behind him. Druitt grabs hold of Molly, putting his hidden rapier blade to her neck, and dismisses Helen's attempt to help him, claiming that killing an 8th whore wouldn't make the slightest difference as he's already killed seven. Helen draws and cocks her revolver, ordering Druitt to let Molly go. Druitt initially makes a move to follow Helen's order, but then rapidly slices Molly's neck before teleporting away. Druitt wasn't fast enough to escape Helen's reflexes though, as she was able to get a shot off at him; the bullet slicing through Druitt's right cheek. Helen kneels down to the now imminently deceased Molly bleeding out on the cobblestone pavement.

Cut to present day Old City, an OCPD police squad car pulls up to an apartment complex at 149th and Willis to check out a disturbance call; Dr. Helen Magnus onlooking from the other side of the street. From this perspective, Helen hears the commotion taking place inside the apartment as both officers encounter an Abnormal boy in a bloody room and ultimately end up dying from the encounter, as well as the three other remaining living residents of the apartment.

After the opening title plays, a young boy named Will who's being babysat goes to bed after staying up late watching a TV program about monsters in this world, which includes 'Bigfoot'. After going to bed due to his parents arriving home, he is then scared by the actual Bigfoot sneaking into his house.

A now adult Will Zimmerman wakes up on a couch, paged to consult a police suspect named Larry Tolson (who's also a former patient of his) at a local hospital about what he was doing at the apartment crime scene from earlier that night. Helen Magnus looks in on Will interacting with Tolson though the blinds of a hallway window; a Nurse beside her telling her that Tolson was the "Manderville Monster" (aka 'Eminem'). Tolson claims that he heard a lot of noise and went to the apartment to complain, finding it full of dead bodies; the murder perpetrated by a boy, not himself.

Helen Magnus then walks to the hospital's morgue to run an autopsy on the two cops that just arrived, setting up a lunch date for the following week with the coroner, Eleanor. She starts her first autopsy on the cop named Albert Russo.

Will tells Det. Joe Kavanaugh that it wasn't Tolson who murdered the family of four and two police officers despite Tolson's previous murderous history.

Helen finishes her duel autopsies at the morgue with officer Lawrence Birch, taking a brain sample from him that's covered in an unknown radioactive fluid.

The Abnormal boy from earlier is seen running down an alleyway, proceeding to duck down into Montgomery Street Subway Station, pursued by a blonde woman with an umbrella, followed by a teleporting John Druitt making an appearance. The boy makes his way onto the tracks and walks along the subway tunnel, the young woman close behind him; now unholstering her sidearm.

Back on the surface after leaving the hospital, Dr. Magnus confronts Will in a back alley about his perspective on the homicide case. She then hands him her business card before turning to walk away in the direction towards the Old City Sanctuary.

Retrieved from "https://sanctuary.fandom.com/wiki/Webisode_1?oldid=21099"
Community content is available under CC-BY-SA unless otherwise noted.