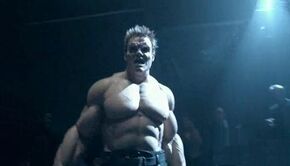 Will Zimmerman in the abnormal fighting grounds

Investigating the disappearance of an old college friend, Dr. Will Zimmerman finds himself caught in an underground fight club where the combatants are genetically engineered Abnormals who fight to the death like modern day gladiators. Meanwhile, Magnus has to deal with the unexpected return of a long-lost family member.

Dr. Helen Magnus, Will, and Ashley Magnus lounge in a Moroccan flavored, Bedouin-style tent, eating pastille and discussing such mundane matters as their favorite music, when the reverie is rudely interrupted by the buzz of Will's cell phone. It is a text message telling him that Danny Bradley, his best friend in college, is missing. Danny's wife, Kayla Bradley, is asking for Will's help. The scene dissolves into a low-rent, illegal fighting arena where we see a scarred, grizzled version of Danny. A strange abnormal-looking 'creature' named Beta is about to fight a smaller man called Stretch, who is forced into the makeshift ring at gunpoint. Beta roars as Mr. Peralta, the ringmaster, screams "No more bets" to a noisy throng of bloodthirsty high-rollers. The smaller man appears to be an abnormal as well. Stretch, using a short-range elastic power, seems to be winning when the sheer brute strength of Beta overwhelms him. The ringmaster orders "finish him" and a roving guard discharges an electrical weapon into Stretch, whose lifeless form is dragged away.

Will visits Kayla at a free mobile kitchen, Danny and her run for the homeless. She explains how homeless men have been disappearing for months. Unable to get the police to help, Danny had begun his own investigation. Kayla gives Will her husband's files and Henry Foss helps him collate the data. Then Team Magnus heads out to investigate further ("Can you say 'Road Trip'"?, grins Ashley). At the same time, in a sparse office high above the city, a strange board meeting is taking place. Peralta enters and is greeted by an irritated-looking woman who he calls Ms. Whitcomb. Eight grim-looking men sit at the table with her. Peralta reports that 54 "unique meta-human fighters" have been field tested thus far, with the "bio-armored meta-humans" showing the most promise. Beta, who was "submissive with his handlers, murder on his opponents" is now dead. We're "still working on the right dosage", reports a subservient Peralta. Nonetheless, he is certain that the Cabal will be pleased. "The perfect field soldier for the cleansing", smiles Whitcomb. "Train 'em in platoons", boasts Peralta. "You'll have your army sooner than you think." Whitcomb barely tolerates the fawning Peralta.

Team Magnus discovers the warehouse where the fights have been taking place. There is blood all over the floor. As they discuss what it all means, a battered, disheveled drunk stumbles in. Ashley and her mother quickly point flashlights and pistols at him. "Who are you?", he asks. Magnus stuns everyone when she replies "I'm Helen. I'm your daughter".

The old man denies that he's Gregory Magnus, insisting that his name is Charles Denton. He says he's been "sleeping one off" and doesn't want to go when Helen offers to take him to the Old City Sanctuary in order to care of the cut on his forehead. Later, Will tries to convince her that she only wants this man to be her long-lost father, that it's just not possible. But Magnus is adamant: "I lost him once, Will. I'm not going to lose him again". 'Charlie' claims he's a 61-year-old 'scoundrel' who was born in the wilds of the Yukon territory to a "Bush Pilot" father. Helen insists that he was born in Devonshire, England in 1829 and that he was "the leading scientific light" of his day. She remembers begging him to explain why his peers were "always so angry" with him. 'Charlie' thinks her story is ridiculous, asserting that he doesn't recall what went on at the fights ("I get these blackouts..."). When pressed, he smiles and asks for more liquor.

Magnus downloads some photos that 'Charlie' took with his cell phone and shows them to Will and Ashley. The photo of Beta, she explains, matches one of her father's 'genetic engineering' experiments pictured in a journal he kept before he "disappeared on an expedition to Mecca". "This particular species", she says, "proved to be so aggressive and dangerous that he had no choice but to destroy every trace of it". But, if he destroyed it, what is it doing here, now? When pushed again by Helen, Charlie denies knowing anything and denies caring about abnormals: "Kill an abnormal, save a pit bull", he sneers. But then, he tells her he knows someone who might know something. The mechanic Will and Ashley are sent to tells them that the fights have been going on for over a year: "The money's huge. It moves through all the big books". He promises to tell them when the next fight is going to be held. But, after Will and Ashley walk away, we see that he too is an abnormal.

Magnus reveals that blood and DNA tests show that all the fighters are abnormals, which is bad news for Danny. "His blood's been altered", Helen tells Will. "They've changed him, or he's changed himself. Danny's an abnormal now". The tests also indicate that 'Charlie' is Magnus' father, either that or he's a clone. But at that moment 'Charlie' is on the phone conspiring with Whitcomb. "The asset is in place", he reports.

Helen continues to work on Charlie, showing him around the Sanctuary, telling him that it was based on his own design. She recalls the first time her father took her into his laboratory. "Once you enter this door", he told her, "you are on a path that cannot be reversed." Magnus is certain that 'Charlie' is remembering. She hammers away, showing him her father's surgical tools. Meanwhile, Will gets a call from 'the mechanic' and is summoned to a meeting. He is told to come alone and bring $500 cash. As Charlie is being ripped apart by memories and a burning sense of betrayal, he screams at Helen to "Back off! I'm not your...". Suddenly he collapses in agony. Magnus sees a Y-shaped surgical scar and something moving beneath the skin of his upper back, at the base of his neck. Meanwhile, Will, who foolishly went alone, is being dragged before Peralta. He is thrown down on a metal table and an incision is made in his upper back. A large (± 3") cockroach-like insect they call a 'Scarab' crawls into the bloody wound and sinks in. "Meet your new boss", gloats Peralta. Will screams in agony and passes out. As Dr. Magnus and Henry study the bug in Charlie, Ashley rushes in to tell them that Will is missing, and she has a bad feeling about it. In order to find him, they must find out where the next fight is.

Will comes to in a dank, barren cell. An angry Danny towers above him. As his friend goes on about how wonderful everything is now on "the juice", Will suddenly realizes that he's been injected with something which is radically changing him. Concurrently, Ashley and Helen are confronting Charlie. When they once again get nowhere, Helen tells him that she'll have to use a scalpel in order to release Gregory. Danny informs Will that he's heard they are taking him straight to a '10' match. Will tries to leave, but the scarab asserts itself and he is helpless. As Helen begins operating on her father, Dr. Zimmerman is transforming into an angry, tormented, hulk-like figure. Danny enthusiastically tells him that he now looks like a "god" and Will smiles.

As Helen tries to slowly and carefully extract the scarab without killing Charlie, Peralta is announcing a 'Meat Club' first: a double match of Riot (Danny) and the Boy Man (Will) against Double Doom and The Lobster, both of whom have to be forced into the ring. To the blood-lusting cries of the 'beautiful people', the four abnormals grunt and pound on each other unmercifully. On the operating table, as parts of the bug get detached, Gregory begins to remember who he was, or is. Now, even though the surgery could kill him, he just wants the bug out. In the "battle royale", Will is clearly the strongest of the combatants, but he seems to have lost any connection with who he is, or was. Then, after vanquishing their two hapless foes, Will and Danny are ordered to turn on each other and finish it off. Back at the operating table Helen finally successfully extracts the scarab from her father. Just before passing out, Gregory reveals where the fight is being held.

At the meat packing plant, Will is in the process of beating Danny to death when Henry rushes in and tries to pull him away. "This is not you", he tells his friend, "this is not you". Ashley holds off the guards at gunpoint, stunned at what she sees, at what Will has become. Henry tells him that they have to get the bug out of him and continues to talk his friend down. Will, with some recognition, begs that they please help him. Helen takes off after a fleeing Peralta. She catches up to him as he empties his safe and drops him to the ground when he tries to shoot her. Magnus puts her booted foot on his throat and orders the frightened flunky to tell the Cabal that she wants the fights, and the genetic experiments, stopped - or they'll have to deal with her.

As he and Danny are slowly brought back to health, Will struggles with what he has done: "I keep thinking, was that me, ready to kill a friend; or was it...somebody else?". Dr. Magnus assures him that all signs indicate "your body has purged the abnormality". But is the hulk really gone forever, or does it yet lurk somewhere within him? Magnus reminds him that the true mark of humanity is one's restraint to inherent violence. As for Danny, Kayla is overjoyed when Will returns her husband alive. However, Helen is left in tears when her father tells her that he can't stay. In his guilt, he imagines he would be a danger to her, as if the Cabal could be even more determined now. He rejects his daughter's tearful offer to stay and work at the Sanctuary, telling her he must find his own way for now: "But I promise you, Helen, I'll never be far".

Dr. Will Zimmerman: What, is it that personal?

Dr. Helen Magnus: Over the course of two lifetimes. Gershwin played it for me while he was writing it.

Dr. Will Zimmerman: And no doubt you've watched the sun come up with the Beatles.

Dr. Helen Magnus: Just one of them.

Gregory, Will, and Helen

Ashley, Henry, Helen, and Will BTS

Charlie and Ashley BTS
Add a photo to this gallery

Retrieved from "https://sanctuary.fandom.com/wiki/Warriors?oldid=19913"
Community content is available under CC-BY-SA unless otherwise noted.