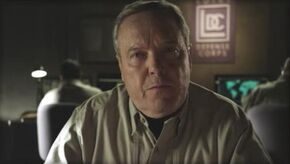 General Villanova is a command level officer of the Lotus Defense Corps.

When a group of abnormals from Hollow Earth arrived on the surface in South Dakota in late 2010, he was charged with overseeing their transport to a military camp near Old City. In his opinion, the abnormals should be treated as criminals until more information was available, and protecting the general human public from them should be the highest priority.[1]

He had a son who died in Iraq, and is determined to protect his grandson and his homeland from what he considers threats from the Abnormal community.[2]

Retrieved from "https://sanctuary.fandom.com/wiki/Villanova?oldid=11938"
Community content is available under CC-BY-SA unless otherwise noted.