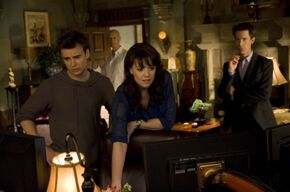 The team continues the search for Hollow Earth.

Written By
Alan McCullough
Directed By
S.A. Adelson
Chronological Information
Preceded By
For King and Country
Followed By
Hollow Men

"Vigilante" is the ninth episode of the third season of Sanctuary.

While the Sanctuary team continues the search for Hollow Earth, Bigfoot has to deal with an enemy of his own.

Moments after Nikola Tesla has revealed that according to the Sanctuary Charter, the fact that Magnus is seriously ill leaves Will in charge, she angrily protest Will's decision to show the map of Hollow Earth to Adam Worth. However, Will is in no mood to discuss the matter; he fears for her life, and is willing to do what must be done to save her.

They make their way to Adam's cell, and after he confirms that he knows how to use the map, Will has his restraints taken off. In the library, Adam walks into the heart of the holographic city and quickly finds his way into the deeper levels of the program. Eventually, the hologram shows them the keystone that will lead them to Hollow Earth.

The team discusses what to do next. Magnus discovers that the hologram leads to a set of coordinates in northern Mongolia; she and Druitt will go there while Tesla must build a device that shields the source blood from the Hollow Earth technology sensors. Will disagrees with her plans, and wants Magnus to rest, but she insists on going.

Some time later, Bigfoot drops a pile of documents on Will's desk; now that he is in charge of the Sanctuary, he has to take care of all the paperwork. Meanwhile, the Grozny Sanctuary has been attacked by rebels, the Network is audited in Norway, and the Asunción Sanctuary can't pay its electric bill because of the depressed guarani. He asks how Magnus handles this workload every day, to which Bigfoot only says, "stay off Twitter". He then tells Will he wants to head into town for the midnight vigil for Father Jensen, a befriended priest killed some time ago.

Magnus and Druitt materialize in Khovsgol Province, Mongolia. There seems to be nothing there, but suddenly they break through the surface into a chamber with familiar symbols on the wall. They find that the keystone has been taken by earlier visitors.

In Henry's lab, Kate complains about the Sanctuary's showers, but he tells her to talk to Will about a new water tank; she points out that Will is "running around like his hair is on fire, which it very well could be considering the amount of gel he uses". Henry tries to make her stop talking, as the acting house head is standing right behind her. Will just smirks, and tells them to look for a missing crate. At that moment, Henry points out that there is someone at the front gate, a beautiful young woman who holds an FBI badge into the securty camera.

On the way to the front door, Tesla asks Will for money for his source blood shield; Will says he'll try to get him what he needs and opens the door. The young woman introduces herself as Abby Corigan, and explains that she and Will trained together at Quantico. However, Will does not seem to recognize her, but acts like he does, especially since he is just as charmed by her as Tesla is. As she explains that she works in behavioral analysis ("serial killers and stuff"), Tesla uses his magnetic powers to open the first button on her blouse, to Will's annoyance. She goes on to explain that one of her cases is that of Stanley O'Farrell, the officer who murdered Father Jensen. She thinks that there is something going on behind the scenes. Tesla leaves, but not without giving Will an encouraging look. Abby says she heard rumors about his work place, and hopes he can help her; the two are obviously attracted to each other.

Magnus has talked to Declan MacRae and tried to find out who might have taken the keystone; Druitt asks her to sit next to him and watch the sunset. She is a bit uncomfortable, and tries to talk about the case, while John seems to be happy to share a moment of peace with his former lover. She asks him to take her to London to follow a lead in the British Museum.

Kate tells Will that the file Agent Corigan gave them is from the top secret Tartarus network; the O'Farrell autopsy report is different from the one the Sanctuary Network got, and Will soon finds the true cause of the detective's death: Harper mites, microscopic abnormals who can kill their host if exposed to ultrasonic radiation.

Magnus and Druitt are in one of the British Museum's vaults with the curator, who has been asked by the head of MI6 to cooperate with them. He hands them the keystone, and tries to point out that Druitt bears a remarkable resemblence to someone, but the two visitors have already disappeared.

Henry tells Will that the missing crate of cypher beetles still hasn't been found. He wants to send Ziggy, a trained crimson kite shark that looks like a regular hawk, to go look for the beetles. Will points out that the bird better not eat the beetles when he finds them.

Magnus and Druitt bring the keystone to Tesla; they put the artifact into its designated place, but the holographic city rejects it.

Will has asked Abby to come back; he wants to go through the remaining files together.

Magnus goes to see Adam and angrily demands to speak to his kind side. He asks how much radiation the keystone emits; it's none, according to Magnus. He explains that the real keystone emits a steady dose of 2.2 rads of gamma radiation. Someone is giving them the runaround.

Henry, Kate, and Bigfoot go looking for Ziggy and the cypher beetles. They find Angelo the driver who was originally supposed to deliver the crate; he is dead.

As they wonder who might kill for a load of cypher beetles, the team notes that one of the beetles got away. Henry captures it and takes it back to the crate; it bites him, which is untypical for the species.

Abby and Will discover that that there are more people who died under mysterious circumstances after killing someone. Abby points that there is no link between the victims, and also notes that Will does not actually remember her. He tries to deny it, but she is a behavioral scientist, and knows there is something he is not telling her. She also tells him that if she cannot solve this case, she will be kicked out of the FBI for following strange theories.

Druitt teleports the museum curator out of his vault and onto the top of Big Ben, where Magnus is waiting for them. Threatening to let him fall, they force him to confess that he sold the real keystone to Hong Kong.

Kate and Henry notice how aggressive the cypher beetle is, when Henry suddenly collapses. Kate summons Will to help, and he asks Abby to leave for now. Henry recovers, but suddenly becomes very aggressive and attacks Kate. Just when he is about to transform to his werewolf form, Will shoots him from behind with a sonic stun weapon.

After Henry has been put to sleep, Tesla hands Will a glass of wine and tells him that he did the right thing. Tesla suggests that the beetles were made aggressive by another microscopic abnormal, Tichus Barbarellus, which is similar to the rabies virus, making its hosts aggressive. Someone has created the angry beetles on purpose.

Druitt and Magnus arrive in Hong Kong to look for the Ceralops who bought the keystone. Magnus is not well, but wants to go ahead with the plan.

The team determines that the killer they are looking for kills people who helped and supported abnormals. Bigfoot realizes that his target is the vigil for Father Jensen; dozens of abnormals will be there, and if they get infected with Tichus Barbarellus, chaos will spread through the streets and a conflict between the human and abnormal population will start. They leave to investigate, and their car is followed by Agent Corigan.

Magnus and Druitt enter the Ceralops' apartment and are ambushed by him and his goons. However, they are able to fight them off long enough for Magnus to take the keystone and for Druitt to teleport them both away.

The rest of the team arrive at the vigil site and meet with Father Clark; as Will tells the priest that the vigil will be attacked, Bigfoot notes a strange smell. It leads him to some joss sticks, and he realizes he smelled it before. He asks Clark what was Father Jensen favorite holiday; Clark doesn't know, just as he does not know anything personal about Jensen, even though he told them that he was a friend of his. Bigfoot angrily demands to know who he is. Clark takes out a gun and runs away, but only after releasing hundreds of aggressive cypher beetles on the team.

As Will and Kate hide under a table, Bigfoot tries to fight off the beetles and follows Clark outside. Abby Corigan is in her car in front of the building, and is shocked to see the abnormal. When he runs off, she gets out of the car and follows him.

Kate sets her stun weapon on overload, causing a massive burst that stuns all the beetles.

Meanwhile, Clark ambushes Bigfoot in a dark alley, and shoots him several times. He calls the abnormal an animal that must be put down, and tells him that he will go after his boss next. Unwilling to let harm come to Magnus, Bigfoot gets up and charges at Clark. He gets shot several more times, but reaches his enemy anyway, and chokes him to death.

Agent Corigan arrives just moments later, and finds Clark's corpse as well as the badly wounded Bigfoot. She comforts him, and tells him that he will be fine.

Some time later, Bigfoot wakes up in the Sanctuary's infirmary, with Kate sitting by his side. She tells him that he will recover, just as will Henry. The vigil has been rescheduled. Bigfoot is deeply distraught by the fact that he killed someone, and thinks that Father Jensen would disapprove of his actions. Kate rests her head on his breast as he continues to sob.

Will brings Abby to the door. She promises him not to tell anyone about their secret, and he believes her. He also tells her that he will call her to give her the tour of the Sanctuary she asked for earlier. It is obvious these two are not finished with each other.

Magnus and Druitt meet up with Tesla amidst the holographic city; he has finished the construction of the source blood shield, in the form of a gold-colored bracelet. Magnus puts the real keystone into its designated place, and the city is replaced by a holographic map that leads them to Tibet.

Magnus goes to see Will; he points out that her job is hard, but she tells him he did well so far. Her hand is shaking, she is getting worse. He promises that they will get to the city in time.

Will, Helen, Nikola, and John

Bigfoot, Kate, Will, and Father Clark

Kate Bigfoot, Will, and Father Clark

Bigfoot and Kate
Add a photo to this gallery

Retrieved from "https://sanctuary.fandom.com/wiki/Vigilante?oldid=16772"
Community content is available under CC-BY-SA unless otherwise noted.