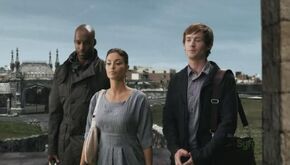 The Triad arrives to question Magnus.

"Veritas" is the seventh episode of the second season of Sanctuary, and the twentieth episode overall in the series.

When Dr. Magnus is charged with murder, Will steps in to defend her innocence. However, the evidence he finds does nothing but incriminate her further.

An upset Dr. Will Zimmerman follows Declan MacRae to the Sanctuary's morgue, where MacRae reveals the body of Bigfoot. Will demands to know who is responsible for his friend's death, to which MacRae answers that all evidence points to Helen Magnus.

MacRae tells Will that Bigfoot contacted him two days ago about Dr. Magnus behaving strangely, and that combined with the physical evidence -- the weapon used in the killing belonged to Dr. Magnus -- he had to invoke Article 9 of the Sanctuary Charter. Will visits Dr. Magnus in isolation, who tells him that she has no memory of the past week. She believes someone deliberately erased her memories to set her up, and begs Will to help her.

Henry Foss mourns at the foot of Bigfoot's sarcophagus. Kate Freelander joins him and tells him that Will wants to see them. In his office, Will explains to Kate that according to Article 9, the apparent wrongdoing has to be reviewed by the other house heads of the Sanctuary Network. They begin to investigate the crime scene and Dr. Magnus' encrypted files.

At the crime scene, Will and Kate discuss Dr. Magnus' behavior; Kate remembers receiving irrational orders from Magnus per e-mail, which Dr. Magnus later denied to ever have sent. Moments later, Will discovers what seems to be the remains of a removed surveillance camera.

Back at the Sanctuary, Henry has finished hacking Dr. Magnus' computer and found a number of brain scans she made of herself. He shows them to MacRae, who concludes that she knew her condition was getting worse, and brought Will into the Network to replace her. The House Heads have charged MacRae with collecting evidence in the case, and sent a Triad of telepaths to check Dr. Magnus' mind.

The Triad has arrived at the Sanctuary: Emma Correia, the only female of the telepaths, is led to her room by Will. She unwittingly reads his mind and is flattered by his obvious attraction to her. She also explains that she and her colleagues will scan Dr. Magnus in the afternoon.

Henry informs Will that the surveillance video from the removed camera had been deleted from the police network by the Chief of the OCPD at Dr. Magnus' request.

Kate meets with one of her informants, who informs her that Dr. Magnus recently bought a bunch of Red List Abnormal material, but does no know what exactly it was.

At the Sanctuary, Dr. Magnus is scanned by the Triad in the presence of Will and Declan. They ask her a number of questions, but Dr. Magnus cannot remember anything. The telepaths try to talk to her calmly, but she is very upset and shows signs of dementia and paranoia. Will ends the session and reconvenes with Henry, who shows him another e-mail.

Will angrily confronts Declan, who asked the house heads to put him in charge of the Old City Sanctuary. He explains that he only wants to be in charge so that everyone can continue their work the way Dr. Magnus would want them to. At that point, Henry calls: he has found a backup copy of the surveillance video.

It shows Bigfoot being shot by Dr. Magnus.

Will is informed that Dr. Magnus is being declared unfit to lead the Sanctuary, and will be transferred. MacRae is put in charge of the facility. Will talks to Dr. Magnus, who is becoming increasingly paranoid, accusing everyone around of conspiring against her. Realizing that something is indeed wrong with Dr. Magnus, he wants to leave her room, but she knocks him out.

Henry continues to go through Dr. Magnus' files, while Will and Kate try to find Dr. Magnus in an abandoned storage facility. Meanwhile, Henry finds a suspicious encrypted file in the Network's computer systems and calls Will. They have to meet somewhere safe, as Will cannot return to the Sanctuary with the knowledge of Dr. Magnus' whereabouts.

At Dead Bridge, Henry explains that he has found some kind of encrypted ghost drive on a project called "Big Bertha" in the Network's system. Will then returns to Magnus, but is followed by Declan, who arrests Magnus.

Later, Emma explains that "Big Bertha" was an extremely powerful Abnormal, who was able to alter the magnetic resonance in her own body to manipulate tectonic plates. Dr. Magnus tracked, captured and killed her, or so it was thought; there are indications that she is still alive.

Declan makes Henry open the Big Bertha file, which reveals that the abnormal is indeed alive and currently transferred to a new location. While the Network makes preparations to retrieve her, Will decides to quit. Emma tries to talk him out of it, but he is unwilling to believe in Magnus' mysterious "degenerative brain disease". Afterwards, he visits the sedated Dr. Magnus one more time to say goodbye. Just when he wants to leave, Dr. Magnus begins to shake violently with a seizure, and Will calls for help.

Dr. Magnus is drugged in order to stop her seizures. News arrive that Big Bertha has been stolen by mercenaries off the African coast.

Will visits Bigfoot's sarcophagus, and opens it, only to discover that it is empty. He suddenly realizes that all the events are part of a scheme by Dr. Magnus: she faked her brain scans and used an Ozone Beetle to manipulate her own thoughts in order to hide her knowledge of the fact that Big Bertha is actually dead. The other evidence was planted to bring the traitor in the Triad to the conclusion that she was still alive.

Some time later, Emma meets with the mercenaries she paid to steal Big Bertha, but the container they took only holds a tracking device: Sanctuary intervention forces led by Will and Declan arrive and arrest Emma and the mercenaries.

Dr. Magnus recovers and tells them how Bigfoot's death was faked (his skin can handle a few bullets) and that the whole plan was worked out in order to frame Emma, who had been leaking information from the Network for some time.

In the end, Bigfoot and Henry, who is still a little mad at his best friend for pulling the whole stunt, meet in the elevator. Henry declares that if Bigfoot does anything like this ever again, he will personally shoot him.

Kate, Henry, and Will

Will and Henry (Declan in background)

Will, Tosen, Emma, Declan, and Schofield

Kate, Will, and Helen

Retrieved from "https://sanctuary.fandom.com/wiki/Veritas?oldid=21788"
Community content is available under CC-BY-SA unless otherwise noted.