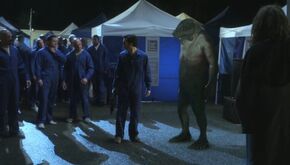 Garris tries to keep control of the Abnormal uprising.

"Uprising" is the second episode of the fourth season of Sanctuary, and the forty-eighth episode overall in the series.

As the refugees from Hollow Earth rise up, Will, Kate and Bigfoot struggle to prevent an all-out Abnormal-Human war.

A Lotus Defense Corps strike team enters the camp where Thelo and his abnormals are holding the hostages and Bigfoot. He then makes his way through the fighting by entering a tent that is destroyed by a huge explosion seconds later.

At the Old City Sanctuary, Will tries to convince General Villanova to order his men to retreat from the camp, but he refuses. Declan MacRae calls from Hollow Earth, informing them that Praxis has been completely destroyed, and that there is no sign of Druitt and Magnus.

The fighting in the abnormal camp continues, and the refugees manage to force the Lotus team out. Will and General Villanova contact Lilian Lee to discuss their next move; Will wants the Sanctuary Network back in charge, but Lee wants the General to handle the situation.

Garris tries to manage things in the Abnormal camp, calming down his companions. A huge lizard creature shows him Thelo's dead body, just before he runs into Bigfoot, who says he is looking for someone. A few minutes later, he finds Kate Freelander, who convinces him that Will did not kill Fallon. He than takes her with him, promising her that she will be safe.

Will and Henry are summoned to a video conference in the main lab. The Executive Committee of the Sanctuary Network has held an emergency meeting because of Magnus' disappearance, and has decided to appoint Will acting head of the global network.

Still shocked, Will sends Henry into the camp to investigate and try and make contact with the hostages.

In the camp, Kate is returned to the hostage tent. Talking to Bigfoot, she begins to realize that someone among the abnormal refugees must be responsible for Fallon's death.

Will once again tries to reason with General Villanova, just as Henry enters the Abnormal camp and informs Garris that Praxis has been destroyed. He tells them that the surface is their only chance for a new life, but is knocked out by the lizard creature.

Will tries to contact the U.S. Secretary of Defense, but is hung up on when he says that Magnus is not available. He has an idea, and calls someone else. Meanwhile, Garris lets the Lotus hostages go and brings Henry to Kate and Bigfoot. Kate tells Garris that everything can still be fixed, but he does not think so.

At the Lotus Defense Corps headquarters, General Villanova launches an attack on one of the abnormal armies, causing a huge cloud to engulf it. In the camp, one of Garris' companions, a female hyperempath, screams out in pain and tells him that their people are dying.

The lizard creature demands to know what happened, as Garris frees Kate and Bigfoot from their bounds.

Villanova and his team plan their next move, and in the Sanctuary, Will has just informed his girlfriend, FBI agent Abby Corrigan, about Hollow Earth and the abnormal threat. He shows her the casualties of Villanova's first attack, and asks her to use her FBI contacts to find out what LDC is planing. She calls a former colleague.

In the camp, word of the attack on the abnormal army has spread, and anger is on the rise. The lizard creature and several others attack the Sanctuary hostages, but Garris intervenes and calms them down, saying that they must not become the beasts LDC is trying to paint them as.

Abby calls another one of her colleagues, and is finally able to make him give her the password to the Quantico cloud server. Will soon finds out that Villanova wants to strike against the Abnormal army in Indonesia. They also discover that Lotus is planning to completely take over all abnormals, and use them as biological weapons. Will realizes that once they have the Hollow Earth ones, Lotus will come for the abnormals in the Sanctuaries all over the world.

Bigfoots tells Kate that he could not find Fallon's body, but he did find the murder weapon -- in Garris' tent.

Henry helps Garris to make contact with Will, who informs them that Indonesia will be hit soon. Henry tries his best to stall the abnormals, while Garris goes to a lonely tent, where Fallon, who is very much alive, is hiding. When she learns of the attack, she reacts coldly, and Garris realizes that she knew all along that Praxis would be destroyed as the "Freedom Paths" opened. Just then, Kate and Bigfoot enter and take her. They also bring the hyperempath to find out what she is planning.

Villanova and his team prepare for their next assault, but Henry hacks their systems and deactivates their satellite feed. Henry also realizes that there is someone else eavesdropping on his hack from inside the Sanctuary. Will and Abby take their guns and start looking for the source. A sensor leads them to one of the rooms in the habitat wing, where they find Helen Magnus sitting at a work station. "What's it take to get a decent cup of tea around here?" she asks.

Magnus shows them pictures of the Abnormal armies, and they realize that they are moving in perfect sync, true north. Someone, or something, is controlling them. They contact Dr. Lee, who is surprised to see Magnus. Will informs Lee that there is a Basilisk feeding ground below the Indonesian caldera; if they fire a warhead at it, it will cause a chain reaction, creating worldwide chaos and giving the Abnormals an advantage -- just as Fallon planned.

Fallon is taken prisoner to face a tribunal of her peers. Garris plans to take his people back to Hollow Earth to build a new, and better, society. Kate tells him that Magnus has ordered her to join him, which she does quite happily, as her feelings for him are stronger than ever.

In the Sanctuary, Will and Magnus discuss the situation, and Will gladly transfers control of the global network back to her. When he asks her what happened during the hours she was off the grid, she tells him that it have been, in fact, 113 years. Realizing this will be a long story to tell, Will joins her in the elevator.

Helen, Abby, and Will

Helen and Will
Add a photo to this gallery

Retrieved from "https://sanctuary.fandom.com/wiki/Uprising?oldid=17170"
Community content is available under CC-BY-SA unless otherwise noted.