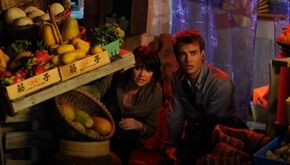 Magnus and Will search for the Crixorum.

"Untouchable" is the third episode of the fourth season of Sanctuary, and the forty-ninth episode overall in the series.

Will and Magnus must explain a mission gone wrong to a UN inspector before the Sanctuary's funding is cut off. Meanwhile, Henry has a surprise visitor with some shocking news.

Dr. Helen Magnus and Dr. Will Zimmerman discuss Greg Addison, a UN security council agent who is about to come and investigate the Sanctuary Network. Bigfoot and Henry Foss report that they have prepared the Sanctuary for a total lockdown, when suddenly, the doorbell rings. It is Erika Myers, Henry's on-again-off-again girlfriend, and she has news for him: he is going to be a father.

In a flashback, in Jakarta, Indonesia, Magnus and Will search a crowded marketplace for the powerful psychic abnormal who coordinated the abnormal armies from Hollow Earth during the recent uprising. A bald man is pointed out to them.

Henry recounts the events to Erika, who asks him to find something to do her.

Greg Addison and his team arrive, and right away starts to antagonize the Sanctuary team. He accuses Magnus of letting her power and influence all over the world go to her head, but she remains calm and continues their tour. Meanwhile, Will, Henry, and Erika make the Sanctuary computer system ready for inspection. The U.N. team wants to build up their own workstations, but Magnus forbids it. When Addison teases her about the "monsters" locked away in the place, Erika partly morphs into her HAP form and angrily slams him into a wall, screaming, "We're not monsters!"

Once the others have calmed her, Erika realizes that she cannot morph, and Magnus takes her to isolation. Magnus concludes that the medication her aunt Lillian gave Erika and the other lycans at the Oldham Psychiatric Institute not only suppressed their transformative abilities, but also affected their fertility, as there have been no lycan children since Erika. It appears that lycan women are supposed to be unable to morph to protect the unborn fetus. However, the pregnancy hormones also interfere with her emotions.

Meanwhile, Will and Bigfoot are quite unhappy with the way the U.N. team is settling in, but Magnus tells them that this is only the beginning, and that they should remain civil.

Back in Magnus' office, Addison, Will and Magnus discuss the situation. Magnus explains that there is a hidden leader among the remaining Hollow Earth abnormals, a Crixorum with immense psychic powers. They went to Jakarta to look for him. Using music to interfere with his ability to influence their mind, they followed him, but were interrupted when armed soldiers in body armor appeared. The Crixorum made these soldiers kill each other.

At that point, Will realizes that the person who sent the soldiers was Addison.

As the U.N. team continues to check the Sanctuary computers, Agent Turner wants to check the jury-rigged weapons Henry has built in the past. Just when he explains to her that there are no blue-prints for most of them, he is called to the infirmary: Erika has begun to morph uncontrollably, and is becoming more and more emotionally unstable. She accuses him of not loving her, and not wanting her around.

Magnus and Will angrily demand an explanation from Addison, who had his soldiers kill the Crixorum. However, he reveals that the body his men fished out of the water had no abnormal abilities whatsoever.

Bigfoot and Henry search for Erika, who has gotten away. Henry eventually finds her in the lab, where she has prepared some new advanced software for him. When he wants to have a look at it, Erika starts to make out with him, but Agent Turner interrupts them.

Meanwhile, Addison tells Magnus that he believes she is hiding the Crixorum, the same way she hid Big Bertha by telling everyone she was dead. He also explains to her that he has people in place to freeze her assets and cut her connections if he deems it necessary; he can bankrupt her with a phone call.

Magnus and Will reveal that the fishmonger who led them to the person they believed to be the Crixorum was the actual one.

Agent Turner inspects Henry's armory, while Bigfoot has a talk with Erika. She suddenly finds something in the computers.

Addison talks to Will alone, and tells him that he wants to get the whole picture of the Sanctuary. He demands to know where Will's loyalties lie, and digs into his past from his sealed file. He even suggests that Will sees Helen Magnus as a way to replace the mother who died when he was a child.

Henry explains to Magnus that someone has tried to get through their firewalls to steal their data. They agree that the whole U.N. investigation is just a cover to get people into the Sanctuary and steal information. However, Magnus refuses to kick the team out.

Addison follows Will into an elevator and tries to convince him that Magnus is bringing the place down. He also tells him that he could get Will instated as her replacement, and asks to know what really happened in Jakarta.

Will recounts how Magnus cornered the real Crixorum and convinced him to return to Hollow Earth. Addison informs her that the Sanctuary is now under complete supervision of the U.N. security council, or it will be shut down right away.

Magnus orders Addison and his team to leave immediately, accusing him of trying to gain access to her work from the beginning. He threatens to ruin her, to which she responds that the next time he comes near them, she will arrange for him to be eaten.

Once Addison is gone, Magnus and Will reveal to Henry that there are funds for the Sanctuary Network hidden in places that Addison doesn't even know exist. They also reveal that the Crixorum is safely in their custody: Magnus shot him and had him sedated. Magnus also explains that having the Network cut of from the U.N. and other external influences was her plan in the first place.

Some time later, Magnus tells Henry and Erika that she can slow down Erika's pregnancy to lower the level of hormones released into her blood. She will be pregnant for almost two years, but the baby will be safe and healthy. Now, Henry has some big decisions to make.

Will and Magnus talk about the future of the Sanctuary. She has had another lifetime to think about it, and has decided that the changes that are coming make it necessary for them to be able to make their own rules.

Sanctuary 4x03 Promo Untouchable
Add a photo to this gallery

Will, Greg, Helen, Henry, and Bigfoot

Retrieved from "https://sanctuary.fandom.com/wiki/Untouchable?oldid=19914"
Community content is available under CC-BY-SA unless otherwise noted.