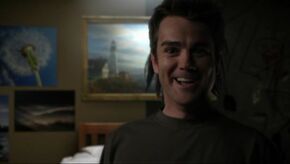 The Two Faced Guy is a humanoid abnormal who lives in the Old City Sanctuary. He has the appearance of a bubbly man in his mid thirties, save for a second, more demented face growing out of the back of his head that has its own personality - a stark contrast to the happy-go-lucky demeanor of his human side.

When first introduced to Will Zimmerman by Helen Magnus, he is held in one of the glass cages in the Sanctuary's main lab, luring Will to the window, only to reveal his monstrous reverse face as a joke. Though he meant no offense, it earned Dr. Magnus' disapproval of his prankster-eque behavior. He is later seen walking freely around the facility, helping the staff with minor tasks.[1][2]

Retrieved from "https://sanctuary.fandom.com/wiki/Two_Faced_Guy?oldid=14027"
Community content is available under CC-BY-SA unless otherwise noted.