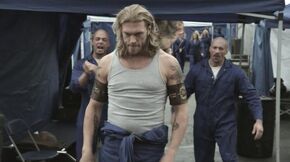 Thelo is one of the Herusans from Hollow Earth who came to the surface.

Unlike Fallon, he was not convinced that their kind would be accepted by the "surface-dwellers". He looked down on her because of her time as a member of the Praxis authorities, and tried to convince other Herusans not to trust her.

When Fallon was murdered and Will Zimmerman was found at the scene standing over her body, Thelo went after him and attacked him while the other abnormals watched. Before he could finish him off, Bigfoot appeared and allowed Will to escape by distracting Thelo.

Thelo and his followers eventually took control of the camp and threatened to execute their hostages (including Bigfoot) if they were not given a land of their own. However, this was soon discovered to be a ruse in order to distract the Sanctuary Network from the massive armies of Hollow Earth abnormals waiting to breach the surface in Chile, Indonesia, and Russia after Adam Worth met with the Hollow Earth tribe leaders.[1]

After holding the hostages, Thelo went into one of the tents while trying to escape the violent uprising which was destroyed by an explosion moments later. His body was discovered after the Abnormals threw back the Lotus attack team leaving the refugees without a leader but Garris ends up taking charge as the new leader while trying his best to stop the violence inside the camp. It was later revealed that Fallon faked her death and killed Thelo in order to instigate the war further besides being the person behind the destruction of Praxis.[2]

Retrieved from "https://sanctuary.fandom.com/wiki/Thelo?oldid=15822"
Community content is available under CC-BY-SA unless otherwise noted.