Start a Wiki
The Depths 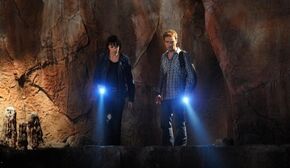 Magnus and Will face the depths.

In search for a legendary abnormal, Magnus and Will become trapped by a cave-in.

Will and Magnus discuss the possibility of combining some of the smaller Sanctuaries in order to save money, when Henry arrives with news; he has been able to find out the destinations of a number of SCIU research teams, including one in Bolivia. Magnus is alarmed, as there is an elusive abnormal hidden in the high Andes that even her father could never find: a giant feathered snake known to humanity as the Mayan god Quetzalcoatl. After being the only survivor of a mission to find it in 1909, Gregory Magnus left strict instructions not to look for it any more. However, Magnus and Will now have to make their way to the Andes; they soon find the SCIU team, which has already captured the dormant Quetzalcoatl. They attack and are able to take out the security guards, but are stunned from behind by one of the scientists with a sonic energy weapon.

Henry records a video message to his unborn child, telling it that he hopes times will be easier for their kind when it is born. He also laments Magnus' decision to keep analogue records of all Sanctuary data for security reasons. He also considers his child growing up after the "Zombie Apocalypse", and having a British accent.

Meanwhile, Magnus and Will awaken to find themselves in the SCIU team's captivity. Its leader introduced herself as Dr. Michelle Moran, and they try to reason with her. However, she is willing to take the stunned abnormal with her, and orders one of her men to shoot a hole in the surface of the cave so they can extract it with a helicopter. However, this awakens the Quetzalcoatl, and it instantly attacks the SCIU team, which opens fire. Will is hit in the abdomen by a stray bullet, while Magnus is taken out by the creature's tail.

Will and Magnus wake up in the ruined cave, both with serious injuries. Magnus starts looking around for the med kit, but most of it was destroyed; she treats Will as good as she can and extracts the bullet. His internal organs are intact, but he has lost a lot of blood. She also discovers an underground spring, so they have fresh water.

In the Sanctuary, Full Outer-Shell Safety Shield System, or FOSS[...], a personal defensive shield that one can wear on one's upper body. He demonstrates how it emits a powerful energy burst.

Will has partly recovered as Magnus prepares rations. She is surprised how well he is, and also notes that they should leave withing 48 hours, or the SCIU rescue teams might catch them. They make it through a small crawlspace, and soon get into a fight about the risks Magnus is willing to take. Will gets afraid and wants to go back, but Magnus pushes him to go on until they reach another cave, with light shining in. Will suddenly notices how he is recovering faster and faster; taking off his bandages, he can actually watch his wound closing up. Magnus responds by asking what is in their water.

Magnus checks Will's improved heart rate, while he notices that he can suddenly remember all the details he learned from his medical textbooks years ago. They realize that the improved physical and mental abilities the Quetzalcoatl grants its followers according to legend may actually come from the water in the creature's habitat. However, they have no idea of its long-term effects.

Henry is still making his video while trying to make his armor work.

Magnus and Will continue on their way through the caves, and he notes how he believes she can no longer appreciate what it means to have only one lifetime, and to give them all to her cause. When he leaves, she whispers to herself that she thinks about it every day. Some time later, Will begins to get worse again, and the water seems to help less every time. She forces him to drink more nonetheless, and he continues on their way angrily. He accuses her of seeing all her mortal companions as expendable, including her daughter, causing her to walk away in anger.

They eventually reach an underwater well, but are attacked by the Quetzalcoatl.

The creature attacks, and Will draws Magnus out of its way, into the pool of water. They swim away, with the Quetzalcoatl not far behind. However, just as it catches up with them, it suddenly turns and leaves. They soon realize that its skin cannot handle UV radiation.

Henry tests the armor again, with the usual violent results.

Against Magnus's advice, Will takes all of the remaining healing water. His perception of his surrounding allows him to plot a way out: he cracks open parts of the cave's ceiling by throwing rocks at it, creating a protective barrier of sunlight around a path to the surface. However, he notes that the overdose of the healing water might soon cause him to shut down entirely.

Mangus and Will swim through a tunnel almost entirely covered with water.

Meanwhile, Henry realizes that the "FOSS" may not work at all. He finally admits to his child that he is actually afraid he might not survive, and that he wanted it to have something to remember him by, to know what kind of man he was.

Magnus and Will make it out of the water, and Will asks her why she chose him to be her protegé. He suddenly realizes that she was the one who paid for his college education. She admits it, but says that she never forced him to do anything. If she could control life like a game of chess, she notes, a lot of things would be different. As Magnus finds an opening to the surface, Will collapses again. He is weaker than ever, and unable to continue, and eventually tries to convinces her to go on alone. She gives him a kiss on the cheek, and leaves to get more of the healing water instead.

As Will begins to fade away, Magnus rushes through the caves, all the way back to the healing spring. As she fills the bottle, she notices her electronic wristband reacting to the minerals around the spring. She takes some of the minerals with her and makes it back to Will.

After their return to the Sanctuary, Magnus treats Will against the effects of the withdrawal of the healing water. Magnus also tells him that he was not part of some conspiracy, and that she took her chances with him. Then she had to live another 113 years watching all her mistakes playing out again, and it changed her view.

Will also asks her to tell him what she has been hiding since she returned from her self-imposed exile. She is not surprised that he knows, but tells him he has to wait a little more.

Retrieved from "https://sanctuary.fandom.com/wiki/The_Depths?oldid=16175"
Community content is available under CC-BY-SA unless otherwise noted.