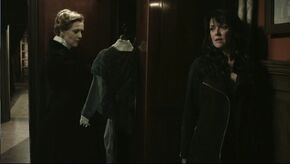 "Tempus" is the first episode of the fourth season of Sanctuary, and the forty-seventh episode overall in the series.

It is the Season 4 Premiere.

The episode continues the storyline surrounding Hollow Earth, Adam Worth, and Magnus' return to London in 1898.

Having followed Adam Worth into the late 19th century, Dr. Helen Magnus hunts him through the dark streets of London. A firefight ensues, resulting in Magnus being hit by a number of bricks from a wall and being left unconscious and surrounded by locals.

A policeman leads a much younger Dr. James Watson to the cell where Magnus is being held. Watson frees her, being stunned by her strange attire and "improper" way of talking. They return to the local Sanctuary, where Watson quickly deduces that he is talking to a Magnus from the future. Magnus realizes she cannot tell him what is going on because it might change the timeline. However, she lets him know that they have to find Adam Worth.

On Watson's advice, Magnus goes to "her" room and changes into something more proper, but is almost caught by a younger version of herself.

Having changed into clothing more proper for a woman of the time, Magnus watches Watson destroy all future technology and documents she has brought with her. They decide to start looking for Adam.

Meanwhile, 19th century Adam leaves his daughter's bedside for a short time, just for his future self to enter and begin treating her with advanced techniques he brought with him. She awakens, finding him strangely dressed and with a new hairstyle. He tells her that he he found a cure for her, but quickly discovers that one of Magnus' bullets damaged part of it.

19th century Adam arrives in the Sanctuary, as he did in the original timeline, but now finds Watson in the presence of Future-Helen, and begs their help because his daughter has disappeared. They visit the hospital and realize future Adam took her. He has already altered the future forever.

Magnus demands from past Adam to know his safehouses and plans, but he refuses. Watson calms her down and they return to the Sanctuary, where Helen arrives just in time to witness the moment her past self confronted John Druitt with her suspicion that he is "Jack the Ripper", the person who ten years earlier committed several murders similar to recent ones. He threatens her with a razor, but eventually slams it into a wall. Looking at her face, he sees only horror, and teleports away. Past Helen leaves heartbroken, and future Helen looks at the razor in the wall.

Future-Magnus returns to Watson, and they plan their next move, when Past-Magnus arrives and wants to start working on the apparent new Ripper cases.

Some time later, Future-Helen arrives at a Gentlemen's Club to talk to Future-Adam. The establishment's butler grabs her and tries to force her to leave, but she easily overpowers him and is asked inside by Future-Adam. She points a concealed gun at him, but he calls her bluff and explains that they can form the future as they please. She deduces that his plans have gone wrong and he needs more money, but he makes her leave.

Soon after, Future-Helen witnesses her past self and Watson investigate another murder of a young woman.

Back in the UK Sanctuary, Watson asks Magnus to help her with the investigation. She tells him that he should have caught the real Ripper by now, and that history has been altered again. Watson also realizes that she is working on a toxin that will kill Imogene in the "proper" way should Adam be able to cure her.

She then goes hunting for Future-Adam in the rainy streets of London, when all of a sudden, Druitt materializes in front of her. Believing that she is hunting him, he attacks her, but is surprised to find her quite capable of fighting him off. She tells him to stay away from her.

Once Druitt is gone, Future-Magnus looks up to find a strange, grey-skinned Abnormal with a monstrously deformed face looking down at her from the rooftops.

"Spring-heeled Jack" jumps down from the top of the building without effort, landing in front of Future-Helen, and realizes that she is Gregory Magnus' daughter. His abnormal powers would have allowed him to commit the recent murders. London is his hunting ground, and he is unwilling to leave and go with her to the Sanctuary.

In one of his safehouses, Future-Adam works on the cure as a fascinated Imogene watches on. She tells him that he looks tired, and he explains that once his work is finished, they will be able to go anyway they want and form the world into whatever they want it to be.

Watson and Past-Magnus discover evidence for another creature possibly responsible for the recent murders -- Jack.

Future-Magnus discovers the safehouse and confronts Future-Adam. She soon realizes that he has cured Imogene already.

Future-Helen tells Imogene that her father (Future-Adam) will cause unimaginable harm to millions of people; Future-Adam attacks her and hunts her through the streets with a Praxian energy gun, drawing the attention of Past-Magnus and Watson.

Future-Worth uses a sonic stun grenade on Future-Helen and prepares to shoot her, but she throws a knife at his leg and escapes. He goes after her and shoots again, hitting a wall, which collapses and buries Imogene, who has followed them. Seeing his beloved daughter dead once again, Future-Adam tries to shoot Helen, but Future-Helen uses his own energy weapon on him, vaporizing him.

Soon police and bystanders arrive, including Past-Helen and Watson, who kneel over the dead Imogene just as Past-Adam arrives. Once again, he is heartbroken by his child's loss, and puts the blame on the Sanctuary team. Although altered in some ways, the timeline remains basically intact.

On the following morning, Future-Helen and Watson go to a rooftop. Future-Helen indicates that she must kill herself in order to keep herself from interfering with history, but Watson offers another solution: as she is immortal, she could simply go into hiding at a remote location, and wait for 113 years, just to rejoin her team in the future the moment after she left. Future-Helen realizes that she might actually need a "vacation", and they share the view over a peaceful London as the sun rises.

Sanctuary Behind the Scenes Tempus
Add a photo to this gallery

Dr. James Watson
Add a photo to this gallery

Retrieved from "https://sanctuary.fandom.com/wiki/Tempus?oldid=21818"
Community content is available under CC-BY-SA unless otherwise noted.