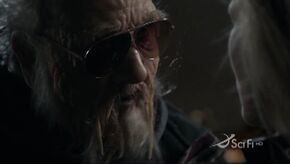 Squid is an abnormal living in Old City. His favorite snack is a bag full of crickets and mealworms which Ashley has given him in exchange for information.

He gave Ashley Magnus some useful information on the Cabal shortly after the Sanctuary team first came into contact with them.[1]

Years later, he gave the Sanctuary team helpful information about the abduction of Dr. Will Zimmerman and his girlfriend, Abby Corigan.[2]

Retrieved from "https://sanctuary.fandom.com/wiki/Squid?oldid=14160"
Community content is available under CC-BY-SA unless otherwise noted.