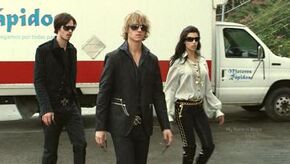 "Sleepers" is the tenth episode of the second season of Sanctuary, and the twenty-third episode overall in the series.

Will and Magnus investigate a case where a number of young twenty-something adults are mysteriously disappearing. Their investigation leads them to a detox clinic run by Tesla, who intends to bring back Vampire-kind. However, one of the "patients" finds a way to speed up the conversion process, which transforms them into a more powerful type of vampire than Tesla.

A couple stops their car when they discover a car that seems to have rolled off the street. The husband, comes to the driver's aid, but finds that the man is already dead. He tells his wife to call 911, but when he turns back to the car, the dead driver is gone. Moments later, something turns up behind him and grabs him.

Dr. Helen Magnus and Dr. Will Zimmerman arrive at the crime scene and inspect the remains of the couple from the previous night, Thomas and Zoe Rayburne. Both have been brutally murdered by something with huge claws.

Back in the Old City Sanctuary, Magnus and Will watch a surveillance video of a young man overwhelming and abducting another man in a parking garage in New City. They find out that the perpetrator is one Chad Spencer, who is also the "dead man" Thomas Rayburne discovered in the car. The abductee is Darrin Wilson, his roommate. Both come from rich families. Will inquires why Henry and the Bigfoot cannot assist him, and finds out that Magnus allowed them both to go to Comic-Con.[1]

In a street, a young woman, Laura S., meets with Darrin Wilson, who drags her into a back alley. To her shock, Chad Spencer, whom she believed to be dead, is also there. She asks him what happened, to which he replies that "it all makes sense" now, and shoots her in the chest. Seconds later, she comes back to life and, like Chad and Darrin, has turned into a Vampire.

Meanwhile, Will and Kate Freelander find out that Chad and his friends recently checked into a private drug rehab clinic in Mexico, under the supervision of one Dr. Heinrich Baumschlager. It is known as "La casa de la Nueva Vida", the "House of New Life".

In Mexico, Magnus and Will meet with Dr. Baumschlager, who turns out to be Nikola Tesla.

Tesla gives them a tour of the facility and explains that he redesigned the bioweapon he created to fight the Cabal's Super Abnormals, and has turned it into a genetic cure for all kinds of addictions. Eventually, Magnus gets him to confess that the "cure" turns the patients into vampires, and that he has treated enough young people to raise a small army of them.

In a loft, Chad kills two more of his friends, who rise as vampires moments later. They soon hack into Tesla's network and discover the true history of the ancient vampire race that once ruled over the world. Chad decides it is time to "rebuild the empire".

Meanwhile, Magnus concludes that sudden death may cause the slow mutation that Tesla built into the young people's genes to accelerate.

Chad and his friend try to get another of their friends into their group by biting him in the neck. However, the boy dies and does not come back to life. They then decide to go back to "Dr. Baumschlager" and find out how to make more of their kind.

Magnus orders Kate to find the remaining patients, but they are soon confronted by Chad and his friends. Tesla surprises them with his strength, but is eventually overwhelmed by a car that hits him. The vampires then take him away, leaving Laura behind.

The new vampires question Tesla about his plan: he chose young people who are the heirs of vast fortunes and positions of power, and in thirty years time, they would slowly have become a new ruling class of vampires. Now that this plan has been spoiled, he does not want to cooperate with them. A fight ensues, and the young vampires throw Telsa off the building. After smashing into a car, he decides that there may be time for some more talk.

Back in the Sanctuary, Magnus, Will and Kate interrogate Laura, but she just insults them and refuses to cooperate. Kate then threatens to shoot her with "massive silver" bullets "blessed by a priest with holy water from the Vatican". Unaware that this method to kill vampires is just a legend, Laura becomes scared and talks.

The vampires take a sample of Tesla's blood and find out more about the process that turned them into a strain of their species even more powerful than the original one.

Magnus learns that she may be able to reverse the process, but that if they do not act in time, there may soon come a new reign of the vampire race.

Magnus concludes that Tesla must have created a "failsafe" to destroy or control his creations, and that he must have hidden it somewhere where it would still be safe after about thirty years time. The team soon realizes that the most likely place to do that is the Sanctuary itself.

They search the place and eventually find the failsafe in an old bottle of wine (a gift Magnus received from Winston Churchill on D-Day): it is some kind of weapon, but they do not know how to use it. Tesla and Chad quarrel about the way to do things, but Tesla eventually decides to listen to Chad's plan.

The Sanctuary team assaults the vampires' loft, but they are captured, and are left bound and gagged. Nikola seems to have taken control of the younger abnormals, and remarks how "it's good to be king again".

Tesla gets the weapon, which he calls a "de-vamper". It is an energy weapon that runs with his electric body energy. He soon removes the vampiric traits from the only female. Meanwhile, Kate and Will are in a panic and can't get free while Helen stays calm and frees herself with a pocketknife, and then rescues the other two. A fight ensues, in which the Sanctuary team soon comes to Tesla's aid. Chad however gets to Kate and threatens to kill her.

Tesla tricks Chad into letting Kate go and uses the de-vamper on him, but the younger man pulls him close enough so that the weapon affects Tesla as well: He is turned into an ordinary human.

Back in the Sanctuary, Tesla finds a way to use the facility's power to charge the de-vamper once more and turn Laura back into a human. Magnus tries to find a way to give him his powers back, but is unsuccessful. Will asks why she even tries, to which she replies that Tesla's becoming mortal would make her the last of The Five.

Magnus and Tesla have a glass of wine, saying a toast to the once mighty, and now extinct, vampire race. However, they soon discover that he seems to have developed some kind of magnetic ability, being able to move metal by will. Nikola Tesla smiles and remarks that "I can work with that".

Note: This episode taking place earlier in the year in late July for SDCC rather than in December can still be a possibility as it does keep with continuity based on occurring after the previous Episode 2x08 - "Next Tuesday" which took place in early-summer during late-June 2009 for Ashley's birthday. However, this scenario is unlikely considering that it's the 10th episode of the season out of a total of 13 episodes. Because a season correlates to the length of one year, it's unlikely that more than half of all of the episodes in a season would occur with in the first 6 months of a year, potentially leaving a 5-6 month gap between 2 concurrent episodes; such would happen if Episode 2x10 - "Sleepers" did occur in late-July 2009 while Episode 2x11 - "Haunted" occurred in early January / February 2010.

Nikola, Maria, Will, and Helen

Helen, Will, and Kate

Tesla, Helen, Will, and Kate

Tesla, Helen, and Will

Tesla, Helen, and Will

Nikola Tesla
Add a photo to this gallery

Retrieved from "https://sanctuary.fandom.com/wiki/Sleepers?oldid=21184"
Community content is available under CC-BY-SA unless otherwise noted.