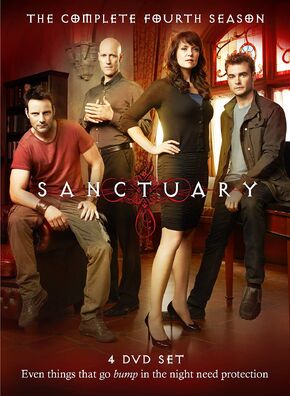 Season 4 of Sanctuary premiered on October 7th and concluded on December 30th, 2011 on SyFy in the US and SPACE in Canada, and some time later in the United Kingdom on WATCH and on Syfy in Australia.

Magnus is able to thwart Adam Worth and prevent any major changes to the timeline, then returns to the present by living through the intervening years again. She and her team manage to end the Abnormal assault on humanity without too much bloodshed, but still must contend with increasing persecution from the Specified Counter-Insurgency Unit (SCIU), an anti-Abnormal agency. Magnus is forced to cut the Sanctuary Network's ties to the UN, reputable banking institutions, etc. in order to maintain independence, a move made possible by her extensive preparations during her second trip through the twentieth century. Additionally, a number of Hollow Earth Abnormals refuse to remain quietly underground and engage in terrorist activities against humans. Matters come to a head when a contingent of these Abnormals, led by Caleb, agree to cease their violent activities in exchange for Magnus' help in establishing a Homeland in Old City. She agrees, but SCIU is highly suspicious due to the group's former attacks. This skepticism proves justified, since Caleb plans to release a substance that would bring out latent Abnormal traits in normal humans, effectively eradicating the species. Magnus is also prepared for this betrayal, taking Caleb out with a massive explosion that destroys the Sanctuary. Now presumed dead, she is free to begin anew in an Edenic Underground City based on the work of Buckminster Fuller and Albert Einstein, one last secret from her repeated century.

The fourth season of the Canadian science fiction–fantasy television series Sanctuary was commissioned by Syfy in January 2010.

In describing what the fourth season would be about, Amanda Tapping stated that the Hollow Earth storyline would still be dealt with. She also requested that Magnus be given a love interest. At San Diego Comic-Con, Amanda Tapping and Robin Dunne stated that season four will contain a musical episode called "Fugue".

Starting with this season, the episodes are split into six "acts" instead of five, to afford an additional commercial break. Months after the fourth season ended, Syfy announced on May 21st, 2012 that Sanctuary will not be returning for a fifth season and that the show is cancelled.[1]

In January 2010, Syfy officially renewed Sanctuary for a fourth, 13-episode season, to air starting Autumn 2011. According to Tapping, producing a 13-part season was more practical than a 20-episode season, stating "I think 13 is a good number for us. Twenty was really hard. It was a great joy because we were able to flesh things out more. And I think had we been given more lead-up to starting our season, although we had a network pickup early. [...] We really only had five weeks to prep this entire season. And if we were doing 20, I think we'd all be in an insane asylum by now. Thirteen was like, we can do 13 with five weeks. There's no way we could've been prepared for 20." Robin Dunne has said that he will direct the sixth episode of the season, having had an interest in doing so. In describing what the fourth season would be about, Tapping stated the Hollow Earth story line would still be dealt with. She also requested that Magnus be given a love interest. The Sanctuary panel during the 2011 San Diego Comic-Con International revealed that there will be a musical episode sometime this season.

The season returned to Friday nights and premiered on October 7th, at 10 pm. The fourth season was the 64th most watched cable show in 2011, averaging 1.262 million viewers per episode and a 0.4 rating for viewers aged 18 to 49 years. It was up from the 997,000 average of the second half of the third season earlier in the year. However, ratings for the fourth season were down 13.44 per cent compared with the first half of season three in 2010.

BELIEVE IN THE UNBELIEVABLE

Dr. Helen Magnus (AMANDA TAPPING) is a brilliant and beautiful scientist who - along with forensic psychiatrist Dr. Will Zimmerman (ROBIN DUNNE), tech expert Henry Foss (RYAN ROBBINS) and the real Bigfoot (CHRISTOPHER HEYERDAHL) - tracks down, studies and protects the monstrous creatures that secretly live among us. Now that their allies have turned against them, the work of the Sanctuary team and, indeed, their lives are at stake, forcing them to make their own rules.

Henry, John, Helen, and Will

John Druitt
Add a photo to this gallery

Retrieved from "https://sanctuary.fandom.com/wiki/Season_4?oldid=22058"
Community content is available under CC-BY-SA unless otherwise noted.