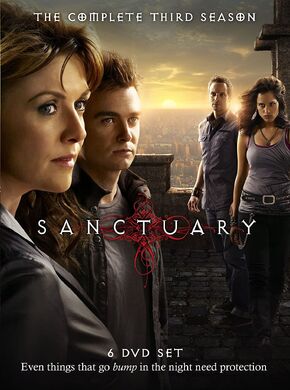 Ultimately, Big Bertha/Kali is saved and Terrance Wexford is ousted, but more questions are raised than answered. Dr. Will Zimmerman visits the spirit plane via induced cardiac arrest, and while there he sees two other powerful beings in addition to Kali; encounters Helen's father, who gives Will a message for her; and then spontaneously returns to life with no brain damage after an unprecedented length of time. The Sanctuary team speculate that the beings are avatars of Abnormals as powerful as Big Bertha, one of which may have been the source of the earthquake that stopped a destructive tidal wave started by Kali's wrath. Meanwhile, Gregory Magnus' message leads the Sanctuary team to old birthday gifts that he had given to Helen years before, which in conjunction produce a tangible holographic map or miniature representing an unknown steampunk-style city. This is eventually revealed to be Praxis, an advanced underground civilization of humans and Abnormals. After an initial period of mistrust (exacerbated by the antics of Adam Worth (Ian Tracey), an old enemy of Helen's who inspired "Jekyll and Hyde", Helen and her team save the world and reach an entente, with Gregory acting as ambassador. However, the peace does not last long. Worth, who escaped, manipulated unhappy Abnormals in Praxis while experimenting with a dangerously unstable energy source to power a time machine. The end results of his machinations were the destruction of Praxis, several armies of displaced Abnormals marching on the upper world, and his escape to the past to attempt to save his daughter, with Magnus hot on his heels.

The third season of the Canadian science fiction–fantasy television series Sanctuary, premiered on Syfy in the United States on October 15th, 2010 and consists of 20 episodes. Created by Damian Kindler, the series was adapted from a series of webisodes released in 2007. The increased number of episodes in this season allows the producers to include numerous story arcs. The second half of the third season premiered on April 15th, 2011 until it was moved to Monday nights on April 25th, 2011.

The Sanctuary team deal with the aftermath of the gigantic tidal wave released by Big Bertha while Dr. Will Zimmerman's life remains in balance but soon the errand comes to an end once Will leads one final plea to "Kali" A.K.A. Big Bertha in his near death experience to stop the destruction. Following Will's return to life two abnormals appear to him to rekindle his memory and in doing so Will remembers an important message that Gregory Magnus sent for Helen to find an underground city with great technology and secrets.

Later Nikola Tesla sends an SOS call and after his rescue continues to help Dr. Helen Magnus in discovering the secrets of the city which eventually leads them to a Hollow Earth atlas. Soon Adam Worth, a former acquaintance, tricks Helen and causes radiation poisoning (that should kill both Helen and Adam in a few weeks) so that she may show Adam the Hollow Earth. Upon Adam's interference Helen, Will, Henry Foss and Kate Freelander enter the city to save Gregory and find a cure for the poisoning but only to be executed immediately when caught while Adam imprisons John Druitt, leaving Tesla and Bigfoot alone in the mysteries. Magnus is then revived by Ranna Seneschal for answering and Magnus finds out that she needs her to help an abnormal from the events of 'KALI', thereby Magnus and the gang is revived and she given the cure and is reunited with her father, together Gregory and Helen save the abnormal and reach the surface back again while John kills Adam.

The show returned to its original format, featuring a new short story for every episode until Tesla and Magnus discover a Praxian Stronghold. This is revealed to have been taken by Vampires and as such was a Vampire Stronghold where a whole army of Vampires and their queen were buried to be awakened someday. Magnus views this as a threat and destroys the stronghold, but not before restoring Tesla to a Vampire again.

On December 12th, 2009 Sanctuary was renewed for a third season consisting of 20 episodes. It will conclude the second-season cliffhanger. The expanded season will also give the producers the opportunity to involve "really big story arcs", as well as exploring more on Helen's past and deal with "something that's much bigger than Big Bertha." Former Rome and "Caprica" actress Polly Walker will guest star as antagonist Ranna Seneschal in two episodes during the middle of the season. In addition, former wrestler Edge (Adam Copeland) will guest star as an abnormal named Thelo in the season finale, scheduled to air during the Spring 2011. Production of the season commenced on March 15th, 2010.

Syfy originally announced that the third season will premiere alongside the second season of "Stargate Universe" on September 28th, 2010. However, they later announced it will be delayed until Friday, October 15th on their original 10 pm timeslot. The season premiere Episode 3x01 - "Kali, Part III" was seen by almost 1.8 million viewers and 1.3 household ratings. Viewership increased 17 per cent in total viewers, and 12 per cent among adults aged 18 through 49, compared to the average for season two. After the fall season concluded, the first ten episode averaged 1.483 million viewers, with an adults 18–49 rating of 0.4, per episode, making it one of the higher rated shows in 2010 for the network.

The spring season began airing on April 15th, 2011 with 1.217 million viewers, a season low. Syfy later announced it would swap the show with "Urban Legends" where it was moved to Monday nights and be paired with "Stargate Universe" starting April 25 due to the low rating from the mid season premiere. However ratings for the show worsened, with 868,000 viewers watching Episode 3x13 - "One Night". Ratings hit an all-time low when only 656,000 saw Episode 3x17 - "Normandy". However, the last three episodes of the season saw a sizable recovery, likely due to the ending of the 2010/11 broadcast season from the major networks; nearly 1.3 million watched the season finale. The spring season averaged 997,000 however, though Syfy picked up the show for a fourth season in January 2011. In Canada the season premiered on the Space channel on October 15th, 2010. In the United Kingdom, the satellite channel Watch bought the rights to show the third season of the show. The previous two season were shown on ITV4.

The third season won three Leo Awards out of seventeen nominations. Jean Tejkel, Kevin Sands, Hugo de la Cerda, Kevin Belen won "Best Overall Sound in a Dramatic Series" for Episode 3x01 - "Kali, Part III". Christina McQuarrie won "Best Costume Design in a Dramatic Series" for her role in Episode 3x08 - "For King and Country". Ryan Robbins won "Best Supporting Performance by a Male" for his role in Episode 3x06 - "Animus". it was the second time he won the award in the category, the first time being in 2009. The season was also nominated for "Best Dramatic Series", but lost out to the final season of "Smallville".

BELIEVE IN THE UNBELIEVABLE

Sanctuary - season 3 trailer
Add a photo to this gallery

Retrieved from "https://sanctuary.fandom.com/wiki/Season_3?oldid=20588"
Community content is available under CC-BY-SA unless otherwise noted.