Start a Wiki
Sanctuary For None, Part II 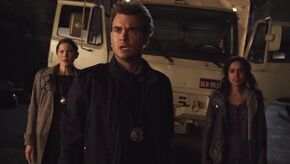 Abby, Will, and Kate watch the Sanctuary's fate.

"Sanctuary For None, Part II" is the thirteenth episode of the fourth season of Sanctuary, and the fifty-ninth episode overall in the series.

It is the second part of the Two-Part Season 4 Finale.
This episode marks the Series Finale of Sanctuary.

After Magnus has announced the existence of abnormals to the world, her great plan is set into motion. Meanwhile, Tesla realizes he may have handed SCIU the means to build a doomsday weapon.

Dr. Helen Magnus has announced the existence of Abnormals to the whole world in a live television interview. Greg Addison and his team are working on ways to get the situation under control; he tries to enlist Dr. Will Zimmerman's help, but he refuses. Will gets a call from Magnus, who tells him detaining the Abnormals will not be SCIU's final move, and that he must stay in place for the time being.

Magnus explains to Henry Foss that she saw a situation similar to the one they are facing now when she witnessed the Nazis enter the Warshaw Ghetto in 1943, and that walling the Abnormals up is the first step on the road to extermination.

Addison gets a video call from a man named Fordis, who tells him that the tech upgrades he took from Nikola Tesla will be very useful for the production of new weaponry. Realizing that he does not have control of the situation, Addison offers Will a deal; he is given access to the SCIU network and promises to find out Magnus' plans in turn.

Caleb, head of the Abnormal Insurgency, meets with Bigfoot and shows him a vial with a blue liquid. He tells him that when all his done, Abnormals will rule the surface and the humans will worship them as gods.

Meanwhile, Tesla and Henry realize that Tesla may have handed SCIU the means to build a doomsday weapon: his multi-spectrum containment concept is applied all around the Homeland Project, and could be turned into a giant electrified web.

Magnus sneaks into the Fifth Ward and meets with Kate Freelander and Bruno Delacourt. She is led to Caleb and tries to convince him that the Insurgency should go into hiding for the time being. She also tells him about the containment field, but he decides that he and his kind should make their stand.

When she leaves, Magnus tells Kate and Bigfoot that she does not trust Caleb, and orders Kate to put Bruno on his tail. However, Bigfoot turns against them and catches Bruno, telling him he needs a lesson in loyalty.

Some time later, Bruno delivers the blue liquid to the Sanctuary; Bigfoot gave it to him after all, and has also decided that Caleb has to be dealt with. Kate tries to convince him to leave with her, but he says it is too early.

Will and Abby Corrigan discover that the Tokyo, Dallas, Brisbane, and Cape Town Sanctuaries have all been closed, bringing the total number of closed facilities in the last eight months to twelve. The two try to figure out what Magnus is up to by tracing her steps after she left London in 1898 following her voyage back through time. They discover she visited Tesla in New York City, where he was working on the Warden Clyffe Tower. She influenced history under the name "Helen Bancroft" (her mother's maiden name) and made contact with Albert Einstein and Buckminster Fuller. She also established various businesses on several continents. Will realizes that the recent 12-minute shut-down of Wall Street was used to hide the fact that Magnus was liquidating her assets. Whatever she is doing, she is almost ready.

Magnus and Tesla try to figure out what the blue liquid is; they eventually discover that it is a virus that could awaken the latent abnormal DNA in all humans on Earth.

Will meets with Magnus, and figures out that she never did truly trust Caleb. He is disappointed that she did not trust him, but she did not trust anyone. Whatever SCIU is doing will happen tonight. She asks him to trust her a little longer, and play his part.

Caleb discovers that the virus is gone, and angrily demands Bigfoot be found. Kate overhears his orders and warns the Big Guy. He acts as if he wants to leave with her, but then locks her away behind a massive door. Moments later, Caleb and the others arrive, and start kicking and hitting him as he goes to the ground.

Will meets with Addison, who is about to send more troops into the Homeland zone. Will convinces him to give him the access to the electrified grid. Tesla and Henry can use them to shut down the grid for a short time.

In her office in the Sanctuary, Helen Magnus arms herself and prepares to leave.

As the grid is shut down, Will and Abby get into the Fifth Ward with a small team. At the same time, Magnus finds Bigfoot's limp body at the Sanctuary's front gate, and he is not alone: Caleb and his abnormal brothers have come to take back the virus. Magnus sarcastically welcomes them to her home, gun in hand.

Magnus fires a number of shots at Caleb, which hardly slows him down. She retreats and tells Henry to lure the intruders to the main lab. Henry and Tesla both gear up and prepare for battle.

Will and Abby arrive in the Homeland Project and start evacuating the abnormals.

Tesla and Henry use their abnormal powers to overcome two of the intruders, while the rest go after Magnus. They catch up with her in her main office, but she is able to slip away.

Will finds and frees Kate, and they soon realize what the pool of blood on the floor means. Minutes later they and the others are on their way out of the Fifth Ward.

Magnus arrives in the main lab and sends Tesla off with a kiss. He locks her in the lab just before Caleb and two of his brothers arrive. The automated guns take his companions out, but Caleb hits Magnus, sending her flying through the room. However, Magnus directs his attention to a self destruct sequence running in the background. He orders her to stop it, but she only spits, "My house, my rules!" and punches another button on her control pad; an automated arm with a giant drill punches through Caleb's upper body from behind, killing him. Magnus puts on Henry's Full Outer-Shell Safety Shield as the countdown reaches zero. Will, Abby and Kate watch on as the Old City Sanctuary is blown to pieces by a series of enormous explosions. Abby notes that Magnus is surely okay, but Will thinks otherwise.

Some time later, Will makes his way through an underground corridor and eventually discovers a door with a retinal scanner. He is let inside, and soon comes across Magnus, who appears completely at peace for a change. As she once did years ago, she offers him a glimpse into a world he always wanted to see -- unless he already has a job. When he notes that he quit SCIU a week ago, she leads him deeper into the caves, to a sight that leaves him speechless: she has secretly created a new Underground Sanctuary, with modern habitats and Praxian technology, large enough to hold all the Abnormals of the world.

"I get a raise, right?" Will asks, overwhelmed.

"Absolutely not", Magnus answers. "Shall we begin?"

Extended Scene: Scene 55 "How Are Things?" 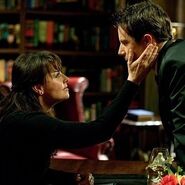 Dr. Helen Magnus
Add a photo to this gallery

Retrieved from "https://sanctuary.fandom.com/wiki/Sanctuary_For_None,_Part_II?oldid=22294"
Community content is available under CC-BY-SA unless otherwise noted.