Start a Wiki
Sanctuary For None, Part I 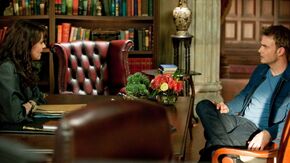 Magnus and Will discuss the future of the Sanctuary.

"Sanctuary For None, Part I" is the twelfth episode of the fourth season of Sanctuary, and the fifty-eighth episode overall in the series.

It is the first part of the Two-Part Season 4 Finale.

A final confrontation looms as the team races to prevent another all out conflict between humans and abnormals.

Richard Feliz arrives at the Old City Sanctuary to tell Dr. Helen Magnus that he wants to quit as her banker. He tries to convince her that he is unable to perform the duties she wants him to in order to achieve her great goal. She understands, but asks him to do her one last favor: to execute "Maneuver Delta-Epsilon", a complete shutdown of Wall Street.

In the streets of the city, Dr. Will Zimmerman comes to the aid of an abnormal who is attacked by a human gang. He is overwhelmed, but a man comes to his help with a group of abnormals. He introduces himself as Caleb, and Will identifies him as the most wanted abnormal in the world. He tells Will to inform Magnus that she has a new friend in town.

Magnus is surprised to find Nikola Tesla in her office, and learns that he has been fired by the SCIU for stealing government money. She then goes to see Will, who tells her about Caleb apparently spreading peace among the Abnormal Insurgency.

Magnus meets with Caleb, who tells her the Hollow Earth abnormals acted in self-defense, but that the conflict with the surface-dwelling humans is no solution. She asks him what she can do, and learns that he wants to create a settlement for abnormals in Old City's Fifth Ward. Will later is surprised to hear that she wants to help with the project.

Later, Magnus calls Greg Addison, who tells her that Caleb is a dangerous terrorist and she has to tell him if she knows the abnormal's whereabouts. Magnus eventually hangs up on him, which Will considers not a smart move. Magnus tells him she wants to move on with the Homeland Project and will recall Kate Freelander to the surface to help them.

Henry Foss finds Tesla in his lab, still in a bad move over SCIU taking away his "stuff". He tries to cheer the vampire up, but isn't even listened to.

Magnus and Caleb make preparations to buy land in the Fifth Ward. Magnus takes Capt. Franklin, local Head of the OCPD, to a hideout where they meet with a number of Abnormals and discuss the possibility of a peaceful coexistence.

Soon after, Will is ambushed by Addison and a SCIU squad. He tells him that he has reactivated him as an FBI agent.

Will angrily packs his things in the Sanctuary, but soon learns that Magnus planned for him to return to the FBI. Abby Corrigan soon shows him to a desk at FBI headquarters. Addison wants to use him in the task force, but he is uncooperative. However, Magnus and Caleb break a number of abnormal prisoners out of an SCIU detention facility, and Addison orders Will to arrest Magnus.

Some time later, Will tries to get into the Sanctuary, but Henry tells him that his code has been retired on Magnus' orders.

Will and Abby try to figure out why Magnus acts the way she does, as the work on the Homeland Project continues. Kate has returned to the surface.

Will meets with Capt. Franklin, whom he worked with back in his time at the OCPD. He tells her that he has been made head of a task force, making him her nominal superior, and orders her to help him bring in Magnus.

Meanwhile, Henry is angry to learn that Bigfoot considers leaving the Sanctuary to live with the Homeland Project.

Will tells Addison he will bring in Magnus soon and get the answers they want. After that, he will be done with the FBI and SCIU and it all.

Meanwhile, Will and Captain Franklin ambush Magnus, but she gets away in her car. Will goes after her on his motorcycle while Franklin calls for backup. A car chase ensues, but ends when Magnus drives her car into a dead end. Will tells her she is under arrest.

Magnus knocks out Will and gets away on his motorcycle just as Abby and the backup arrive. Back at the Bureau, Addison tells Will that he will handle the situation personally now.

Meanwhile, Magnus tells Caleb that they might have to redirect the overflow of abnormal refugees to other Sanctuaries, but he refuses to turn anyone away. Magnus then notices Bigfoot, and they have a talk. He tells her that this is his home now, and Magnus accepts his decision.

Addison finishes a phone call, and tells Will that bringing all the abnormals together in one place was exactly what SCIU wanted in the first place; they soon seal the abnormals in the Fifth Ward with a massive military presence. A cover story is put into place, informing the population about an apparent toxic spill in the area of the Homeland Project. However, just as Addison explains to Will how this has always been a police state in reality, Magnus appears on TV with a reporter. She has news for the world:

"I realize that what I am about to say may sound strange, or even frightening, but I assure you every word is true. It's time the world knew the truth. This district is full of strange beings, who have lived among us for hundreds of years. I call them Abnormals. You know them as monsters. And they very much exist."

Sanctuary For None Pt1 Trailer
Add a photo to this gallery

Retrieved from "https://sanctuary.fandom.com/wiki/Sanctuary_For_None,_Part_I?oldid=22309"
Community content is available under CC-BY-SA unless otherwise noted.