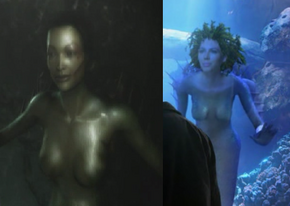 Sally is the name Dr. Will Zimmerman and Henry Foss gave to the Mermaid living in Dr. Helen Magnus' Sanctuary in Old City. Her actual name is known to them, but they consider it unpronounceable.

Sally is good friends with Dr. Magnus and is able to communicate with her telepathically.[1]

She is later contacted by her people in the Bermuda Triangle and asks Dr. Magnus and Will to investigate that has happened to them after contact is lost.[2]

A year later, Sally helps Henry Foss take advantage of a mental vulnerability in a mob boss to create an illusion to trick him. When Will asked Dr. Magnus about a thank-you gift for Sally, Magnus notes that she would likely like it if he swam with her -- without a suit.[3]

In 2011, Sally tries to help Magnus in freeing Bigfoot from the mind-altering influence of the Crixorum.[4]

She is featured in:

Sally's physical appearance changed considerably between Episode 0x02 - "Webisode 2" and Episode 1x00 - "Sanctuary for All"; her skin was greenish and fluorescent in the Webisode, whereas it was blue in the TV series. The fins on her shoulders remained almost the same, yet her hair was changed and her face appears more human.

In the TV series, she was portrayed by actress Amanda May.

Retrieved from "https://sanctuary.fandom.com/wiki/Sally?oldid=25627"
Community content is available under CC-BY-SA unless otherwise noted.