Start a Wiki
Revelations, Part I 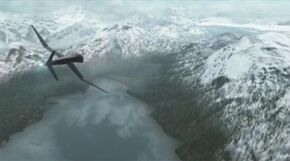 It is the first part of the Two-Part Season 1 Finale.

Abnormals in remote regions are subjected to an airborne biological agent that compels them to launch a violent string of murders.

A large unmanned drone with bent wings is flying over a snow-capped mountainous region. A bomb is jettisoned into the snow below. Suddenly there is a large explosion which releases an expanding green cloud. Next, a lone Abnormal with a walrus-like face is chopping wood in the forest when suddenly he is infected by the gas. He gasps, falls to his knees and passes out. Elsewhere, a man and a woman are tending their garden when the walrus man stumbles out into the clearing. The man, George, is startled but relaxes when he sees who it is. "Roy," he calls out to his good friend. But Roy, who is holding an axe, is staggering and grim-faced. Suddenly he lunges at his friend with the axe and the woman screams.

Dr. Helen Magnus, Dr. Will Zimmerman, Henry Foss and Ashley Magnus are looking at a computer screen in the Old City Sanctuary's library, going over reports of "sudden unexplained violent behavior among Abnormals." The reports, starting near Mount Logan, seem to be "following the upper air stream" as they spread south. Dr. Magnus declares that they have to find out if this is a naturally occurring phenomena or an intentional act.

Bigfoot answers the door only to find John Druitt standing there. Although he doesn't want to let him in, Druitt has an opening : "I bring critical information, my hirsute friend, about the troubles in the north."

Dr. Magnus is unamused: "Forgive my skepticism, John, but your history of altruism is just behind a scorpion's." Ashley shows him no respect either. When he protests that he is her father, Ashley replies that perhaps he "should start acting like one, and that does not mean kidnapping me when you want to spend some quality time." Druitt opens the large black bag he has been carrying to reveal the charred remnants of a dispersal device which he recovered from ground zero of the explosion. Dr. Magnus, suggesting he's a possible bio-hazard (and not trusting him one bit), wants him locked up in "a level-three residential cell" with an EM Shield so that he can't teleport out. When Ashley questions his motives, Druitt tells her "The war has begun. Humans versus Abnormals, and I will not stand idly by while the Cabal imposes its chaos."

Although he has only begun his study, Henry reports that the device is highly sophisticated, like "stuff they used to test at Fort Dietrich for defensive purposes." Bigfoot brings in a telegram from Dr. James Watson, the head of the UK Sanctuary. Watson will be arriving tomorrow. Will is flabbergasted that another member of The Five is still alive.

Elsewhere, Dana Whitcomb is walking thru a Cabal building, being briefed by the Cabal Doctor on the great "progress" of the outbreak. Although the poison will wane in four days, she is pleased with the results of the test: "The reaction to the abnormal uprising is exactly what we hoped for. Anger, scapegoating, retribution. That's your real vector of transmission." Whitcomb confidently dismisses a Cabal Member's concerns about The Five, saying "they have no idea what they're facing." Nevertheless, she has ordered hourly updates on every communication "in and out" of the Sanctuary.

Dr. Watson arrives bearing "gifts" - a truckload of Abnormal corpses. He greets Helen, Ashley and Henry warmly, but he studies Will studying him. "The protégé," he purrs. "Profiler, right?" "And people tell me I sound like Sherlock Holmes," laughs Will. "Actually, Will," replies Dr. Magnus, "that's exactly who he is."

Later, Helen explains that Watson insisted that Arthur Conan Doyle would only name the sidekick in his stories after him, even though he was the actual basis for Sherlock Holmes. But Will is more concerned that Helen and the whole crew could become infected, psychotic and aggressive: "I've done that dance with you once, a half a mile under the ocean. I'm not anxious to do it again."

Dr. Magnus and Watson perform an autopsy on a walrus-human Abnormal, after which, in the lab, the quasi-crippled Watson regrets that they do not see enough of each other. Helen announces that she has released Druitt. "Now if you could only release yourself," replies Watson. "Most people go back to their oldest contacts for solace, Helen," he continues, "You defy that convention, but then again, you always have."

Later, in the study, as he adjusts his complex brace apparatus, Watson enjoys a brandy with Druitt and Will. The two old friends continue their centuries-old battle of wits. For Watson/Holmes, Druitt/Jack The Ripper was the one that got away, the case he couldn't crack. "Justice is meted out in many ways," intones Druitt, "you're not the only one haunted." They then toast each other.

During examination of the pieces Druitt brought back, Henry is having trouble understanding the bio-dispersal device : "So much chop, so little suey." Among the debris, he then finds an intact micro-vial containing a pure sample of the pathogen.

Once the tests on the sample are complete, Dr. Magnus reports that the agent acts "like a prion on steroids." "The rogue protein found in Mad Cow disease," adds Will. Abnormals are driven crazy and made violent, only to die a very painful death. Dr. Magnus is convinced that something in the blood of The Five could be the basis for an antigen. If not, she argues, then perhaps the ancient Source Blood itself could hold the answer. Will is surprised to learn that some of the all the powerful Source Blood still exists. As it turns out, Helen's father locked the remainder away and only The Five, acting together, can retrieve it in an emergency. However, Nikola Tesla may be dead, and Nigel Griffin died half a century ago. Helen, however, thinks there may still be a way. Griffin sent her a letter telling her that his powers had been passed on to his daughter, Anna. When Will asks what Griffin's power was, Watson informs him that he was the "Invisible Man".

Suddenly, in a hallway, Bigfoot collapses, bleeding from the mouth.

Helen hypothesizes that the microorganism may have entered the Sanctuary on Watson or Druitt's clothing. Henry fears that all the Abnormals in the Sanctuary, including him, will become infected.

As Helen and Henry watch their friend suffer, Whitcomb is again being briefed by the Cabal Doctor. The Cabal knows that the Sanctuary has been breached and infected. Whitcomb, however, is reminded that Helen's father didn't reveal the location of the Source Blood, which the Cabal clearly wants.

Ashley's sources have reported that this was, indeed, a dry run; but that in three days, all hell will break loose. Helen is certain not having Tesla won't be a problem if they can find Griffin's daughter. Will is told that Gregory hid five keys needed to find the vial in the labyrinth located beneath "the lost city of Bhalasaam in the Indian Himalayas." Henry bursts in announcing that he has discovered the whereabouts of Griffin's daughter, who apparently faked her death, but they've got to hurry. They need Druitt to teleport there, but they don't trust him alone so Will is drafted.

The two of them find a girl in Baton Rouge who claims that Anna Griffin is indeed dead, which they don't believe.

Meanwhile, Ashley is arguing with her mom to let her and Henry sneak into the Cabal's weapon's factory but she relents and let's them go.

Will and Druitt are visiting the supposed gravesite when something strikes a branch. Will looks for footprints in the grass. They are tracking the prints when Will is suddenly kicked in the groin. Druitt wrestles with the invisible girl but she escapes. However, Will turns on the sprinklers so that they can see her and Druitt teleports ahead, capturing the shivering naked girl, Clara - Nigel's granddaughter.

As Will and Druitt try to talk Clara into helping them with their quest, the big guy begins going berserk, smashing everything in his sealed bio-room. He has a moment of clarity, saying "Helen, don't let me out" before the violent rage returns.

While Magnus fumes about the Cabal, Will tells her that he isn't convinced Clara is up to it.

Will then has a long talk with Clara, who says he sounds like her mother, and she starts to come around.

Helen can't stand watching Bigfoot suffer so she goes in with him to try to save him. When he attacks her and she can't talk him down, she stuns him with a weapon.

Henry and Ashley prepare to sneak into the Cabal's factory, that is, if they can get past the barbed wire and lasers. Henry's device shuts off the lasers and in they go.

Back at the Sanctuary, Helen is trying to keep Watson pumped as the five prepare for their departure. As Watson continues to voice doubts, Helen smiles and says: "Suck it up, Jimmy. We're going to India."

At that moment, Henry and Ashley, having penetrated the building, are surprised, surrounded and shot with taser guns. They fall to the ground, unconscious.

Druitt teleports the team to a forest outside the lost city of Bhalasaam.

At the same time, a frightened Henry, strapped into a strange chair, struggles to break free. Men in lab coats are all around him. "Who the hell are you," he demands. "Relax, Mr. Foss," says the Cabal Doctor who has been advising Whitcomb, "I'm your Doctor."

Elsewhere, Ashley awakens to find herself alone in a lab room. She is untied, sitting in a chair which rests on a large metal surface. Touching the surface with her bare foot, she discovers that the it is electrified. She also finds that she has been injected with something. Whitcomb enters with two men. She apologizes to Ashley for the elaborate precautions, but says that her reputation precedes her. She also tells Ashley that, despite her efforts, 'Lazarus' will be released, and that its effects will be "a thousand times more devastating than phase one. When the dust settles," Whitcomb promises, "it will bring a new day for humans, and what's left of Abnormals." She informs Ashley that her mother will fail because Ashley herself is going to help the Cabal succeed.

Helen and the team reach the lost city only to find it totally destroyed. Watson is dispirited: "It's over. No access, no source. No source, no vaccine. No vaccine, no way to stop the Cabal from taking over human evolution.".

Henry, Ashley, and Will

Clara, John, and Will

Helen, Will, Watson, and John

Clara Griffin
Add a photo to this gallery

Retrieved from "https://sanctuary.fandom.com/wiki/Revelations,_Part_I?oldid=22229"
Community content is available under CC-BY-SA unless otherwise noted.