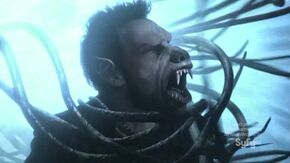 "Resistance" is the fifth episode of the fourth season of Sanctuary, and the fifty-first episode overall in the series.

The team tracks an Abnormal fugitive, and discovers that Tesla is the head of a secret research lab for a Homeland Security agency that conducts tests on Abnormals.

The Sanctuary team hunts for a humanoid abnormal in the streets of Old City. Just when they are able to stun the young man, a team of the Specified Counter-Insurgency Unit, the Department of Homeland Security's new abnormal hunting division, arrives. The leader, one Col. Bosh, orders them to transfer the creature into their custody. Magnus protests, but he tells her that she should talk to the President if she has a complaint. When the DHS vans leave, the Sanctuary team turns to Henry, whose laptop is already tracking the cars' movements thanks to a bug they smuggled in.

Back at the Old City Sanctuary, Henry informs Magnus that the abnormal has been taken over the border to a secret base in the middle of New Mexico that is used for government research on abnormals -- Area 51. Magnus and Henry go to inspect the base, against Bigfoot's protests. They have no great trouble entering the subterranean laboratories and hacking the computers, quickly finding a map to some kind of "inner sanctum". Once there, they are ambushed by security guards and taken to the office of the facility director -- who turns out to be none other than Nikola Tesla.

Tesla explains that the DHS approached him months ago and he took the job because of the money. Magnus angrily demands to inspect the facility's abnormals holding cells, but is rejected. When they leave, she suggests that there is something wrong with him, but before she can go any deeper, an alarm goes off and one of the guards is drawn away by a strange creature with tentacles and a light aura.

Magnus and Henry return to Tesla's office, where he explains that the creature appeared suddenly about twelve hours earlier. They decide to go looking for it together.

Back in the Sanctuary, Dr. Will Zimmerman finds a small man going through the food in one of the kitchen fridges. Bigfoot explains that he is Galvo, a refugee from Hollow Earth who is looking for a way home. Unfortunately, Will has bad news: one of their return operations in Chile was busted by the authorities.

At Area 51, Magnus, Henry, and Tesla come across a group of scientists who are hiding away in a safe room. Just then, the tentacles abnormal appears again, but they are able to scare it of with their stun guns. Magnus realizes that the creature is using some kind of interdimensional event horizon, and quickly deduces that Tesla has something to do with it.

Tesla explains that he used the government's money to fund his own research; he is working on a rift field generator, a limitless source of clean energy, available at any time as needed. However, the first activation of the machine coincides with the first appearance of the mysterious abnormal. Magnus orders him to shut the machine down.

When Galvo starts getting on Bigfoot's nerves, he locks him in a closet and asks Will to find a way to get rid of him. When Will explains that they need more abnormals before they can make another try at passing through a gateway, Galvo tips them of to the possible location of a number of Hollow Earth refugees.

Back at Area 51, Tesla learns that Henry and his girlfriend are expecting. His typically cold reaction causes Henry to tell him that in the end, he will be left all alone because he betrayed the best friend he has ever had. When the transdimensional abnormal appears again and attacks Magnus and the other scientists, Henry and Tesla try to shut down the rift field. The creature withdraws, yet the field comes back online. Tesla is the only one happy about the fact that he just invented wireless electricity.

Once the scientists are away safely, Tesla tries to find a way to salvage his newest invention. However, Magnus points out that as the rift grows, it might eventually draw more of the mysterious creatures over to their side. Tesla points out that he chose to fight from the inside while she chose the outside, but they disagree heavily on that subject.

Meanwhile, Will and Bigfoot have found the location of the abnormal refugees and make plans to meet them at a church in the fifth ward. Once there, they witness the group being dissolved into a green cloud of dust.

In Area 51, Tesla has an idea of how to shut down the field, but they need some titanium rods from the other side of the facility. On the way, they are attacked by the creature, which grabs Henry and draws him into its center before disappearing with him.

In Old City, Will and Bigfoot deduce that someone must have set them up, and suddenly realize that Galvo is gone. They hunt him down in an alley, where Galvo now speaks with a very different voice, and reveals that he is part of the abnormal faction that wanted to take over the surface. He killed the others because they decided to return home. Just before he can kill Bigfoot, Will takes him down with a stun gun.

An angry Magnus asks Tesla if he is happy with the result. They return to the machine and implement the plan to shut down the rift field. Suddenly, they discover Henry's tracking signal is still active in a cave beyond the facility. They decide to use Magnus as bait for the creature while Tesla teleports to its "nest" by using his electromagnetic powers on the rift field. Once there, he frees Henry, just as the creature corners Magnus.

Magnus uses her normal gun on the creature, forcing it to retreat. After returning to the lab, she has decide on whether to collapse the field or not. She ends up waiting just long enough for Tesla and Henry to return, and then locks the creature out of the material world.

Will tries his best to comfort Bigfoot, who is taking his seeming loss of instinct quite serious. Magnus checks on Henry and tells him there is no radiation left in his body. She also informs him that she has heard no news from Tesla, and that he is unwilling to quit his new job. When she leaves, Henry draws her attention to the contents of an electronic tablet Tesla handed him when they left; it includes a detailed list of all the abnormals in the facility's custody, as well as the future plans the government has for it. Tesla, Magnus points out, is still full of surprises.

Will, Bigfoot, and Galvo

Bigfoot, Galvo, and Will

Retrieved from "https://sanctuary.fandom.com/wiki/Resistance?oldid=19795"
Community content is available under CC-BY-SA unless otherwise noted.