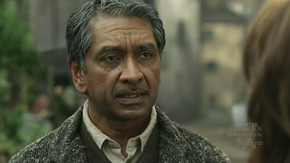 Dr. Ravi Ganapathiramani was a human agent of the Sanctuary Network, and the house head of the Mumbai Sanctuary.

He assisted Will Zimmerman and Kate Freelander in their investigation of the Cult of Kali member Paveljit. He preformed an autopsy on him and discovered that the man was over 200 years old.[1][2]

Some time later, Ravi was on his way to a conference when Declan MacRae of the UK Sanctuary asked him to investigate a strange phenomenon near the town of Carentan in northern France. Ravi did so, and was trapped in a time dilation field; he was unable to escape and spent the next forty years of in-field time as an inhabitant of Carentan, even taking a wife, Anna. When Dr. Magnus and Will arrived, he helped them go through the notes that he and other scientists had left behind; they discovered that they had to dissolve the field, and that doing so would remove everyone born after the creation of the field from reality. Anna assured him that they had to do it anyway, as the fate of the entire planet was at stake.

When an angry mob led by his young assistant, Josie, tried to keep Magnus from dissolving the field, Ravi jumped in front of Will, being hit in the back. Will later told Magnus that Ravi did not survive.[3]

Retrieved from "https://sanctuary.fandom.com/wiki/Ravi_Ganapathiramani?oldid=11652"
Community content is available under CC-BY-SA unless otherwise noted.