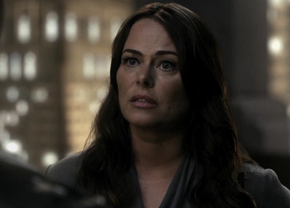 Ranna Seneschal was the leader of the city of Praxis in Hollow Earth.

Ranna is the leader of Praxis. She first appeared after Helen Magnus and her team enter Hollow Earth in search of Gregory Magnus. Because "surface dwellers" are not allowed into Hollow earth, Ranna ordered Commander Toland to capture the surface dwellers who had entered. She considers Gregory Magnus, who arrived in Praxis decades ago, a good friend. Ranna's age is uncertain.

When Helen Magnus and her team where brought before her, she ordered them to be executed. She ignored their pleas for mercy, saying that the law only protects citizens of Praxis, and watched them being electrocuted. Once the sentence was carried out, she left, saying that "Justice is served".[1]

However, she soon had Magnus revived in order to question her further, and became convinced that the Sanctuary team actually wanted to help. She led a mission to the deepest depths of Hollow Earth, where she and Magnus performed an emergency surgery on the hyperspecies abnormal Kanaan. After this mission was completed and the crisis around Adam Worth was also averted, Ranna allowed the surface dwellers to leave for the surface, and advised Magnus not to contact them unless being contacted first.[2]

Some time later, the Sanctuary team tried to establish contact with Ranna because Will Zimmerman had been infected with Cillobar spores. She publicly answered with a recommendation to terminate the infected subject, but hid a Morse code message in the interference of the signal; that message was the key to saving Will.[3]

Praxis was later destroyed by the effects of subsequent experiments by Adam Worth and the enormous amount of energy required to operate his time machine. Millions were wiped out in a matter of moments, as the continous flow of energy caused a chain reaction destroying the once proud city. Ranna was among the missing during the disaster, her office being reduced to rubble; it is believed she is among the millions of casualties.[4]

Retrieved from "https://sanctuary.fandom.com/wiki/Ranna_Seneschal?oldid=15825"
Community content is available under CC-BY-SA unless otherwise noted.