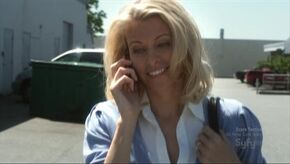 Mrs. Rachel is a research scientist of the Sanctuary Network. She is Gerald's wife and an old friend of Henry Foss.

She and her husband Gerald care for and study an Abnormal, a Pleskidara named Jack at a local research facility in Old City. While she studies the creature's behavior, Gerald studies it's biochemistry.

One morning Jack attacked and nearly killed her out of the blue, infecting her with deadly spores. Later, during the investigation at the Old City Sanctuary, it was revealed that Jack only did so because he was drugged by Gerald due to Gerald being jealous of Henry's close relationship with her.

Rachel and Henry had deep feelings for each other. When they first met, Rachel, Gerald, and Henry all started out as friends who eventually fell into love triangle. Rachel had initially wanted to be with Henry, but married Gerald as he was the one who had asked for her hand in marriage. Henry had wanted to be with her, but was afraid to fully love her because he was a HAP. Because of his hesitancy, Gerald beat Henry to the punch. With Rachel and Gerald together, Henry stayed as a close friend; eventually getting too close.[2]

Retrieved from "https://sanctuary.fandom.com/wiki/Rachel?oldid=21651"
Community content is available under CC-BY-SA unless otherwise noted.