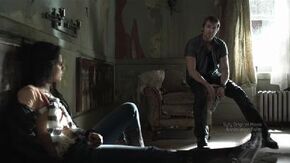 Kate and Jimmy discover how their lives are connected.

"Penance" is the ninth episode of the second season of Sanctuary, and the twenty-second episode overall in the series.

When Kate Freelander gets shot by Abnormal mobsters, the transport of a dangerous Fire Elemental turns into a journey back into her own past.

The Sanctuary team observes Dr. Helen Magnus meeting with her old friend Jimmy, a human-looking Abnormal who transports a Tunisian Fire Elemental in his hidden abdominal pouch. Suddenly, a number of Chicago Abnormal mobsters appear; Jimmy stole the Elemental from them, and they want it back by all means.

Henry Foss creates a diversion by stunning one of the mobsters, and a gunfight ensues. Kate Freelander gets Jimmy out safely in a car, but soon loses consciousness due to a bullet wound in her right shoulder.

The team waits for Kate to show up at the rendezvous point, but she and Jimmy are not coming. Magnus orders everyone to investigate.

Meanwhile, Jimmy takes Kate to an abandoned apartment and treats her wound, and tries to remove the bullet.

Magnus and her team search for their lost comrades, and Henry discovers that Duke, the leader of the abnormal mob, is a human-like abnormal, a member of a subspecies that suffers from uncontrollable attacks of rage.

At his headquarters, the Duke is informed by his henchmen that Jimmy and the elemental got away, and that they lost track of them. A device on his head seems to counter-effect his rising anger, but it is not strong enough to keep him from beating one of his men half to death with a golf club. His adviser, Owen, tells him to restrain himself and is ordered to monitor the frequencies of the Sanctuary Network.

Jimmy tries to remove the bullet, causing Kate great pain. In order to distract her from it, he begins a conversation about her background- He eventually succeeds in getting the bullet out, but Kate loses consciousness again.

Magnus and Will are checking the surrounding area, when Henry informs Magnus that their walkie-talkies have been hacked. She destroys her own one and goes looking for Will, but only finds his abandoned walkie-talkie lying on the ground.

Jimmy performs CPR on Kate, managing to get her conscious again. The elemental, which is still in his pouch, causes him to sweat more and more. He explains that the creature is a nearly unlimited source of energy, and cannot fall into the wrong hands.

Will is taken to Duke, who wants to use him as an "insurance policy" against Sanctuary.

The remaining team rendezvous at Henry's lab, where Magnus explains that Jimmy's pouch conceals the heat signature of the elemental, but only for a certain amount of time; sooner or later, the creature will become visible on heat scanners.

In order to keep her awake, Jimmy continues to talk to Kate. They discover that both their fathers died during their childhood.

The Duke gets informed that their hack has been compromised. Just then, he receives a phone call from Magnus, who threatens to cause him terrible trouble should Will be harmed in any way. She also bluffs him into believing Jimmy is secure and on his way back to the Sanctuary.

Meanwhile, Henry and Bigfoot go looking for heat sources in the neighborhood.

Kate inquires about a tattoo Jimmy has obviously tried to have removed from his; he explains that after his father's death, he got involved with the King Town Gang at age sixteen. He used his pouch to smuggle illegal goods, including guns used in robberies and murders. However, ten years ago, Helen Magnus suddenly appeared and convinced him to abandon the gang, which was about to betray him. Kate looks at Jimmy, remarking how familiar he looks.

The Duke's people observe Henry tracking heat sources, which causes Duke to summon Will and tell him that this is "very, very bad news" for him.

The Duke tunes down his rage inhibitors and begins to question Will while strangling him.

Jimmy has to restrain Kate and they talk further. She explains that her father was a low level criminal and died when the police station where he was held was blown up. Her mother went into labor from the shock and the baby barely survived. Jimmy is visibly distraught by her story.

Henry realizes the abnormal mob is still monitoring the Sanctuary's systems through a backup computer worm. He wants to take the system down, but Magnus tells him not to, because she plans to use the fact that the mob is watching.

The Duke brutally attacks Will but is restrained by Owen, who has a remote control for the rage inhibitors. He shows him that they have discovered confirmation that Jimmy is with Magnus. The Duke then calls Magnus, telling her she has thirty minutes to deliver the elemental, or Will will die.

Magnus and Henry realize that the Duke is using inhibitors, and devise a plan.

Kate remembers that the bomb that killed her father was planted without anyone noticing it getting into the police station. Now, she also remembers seeing Jimmy leave the building moments before the explosion, the King Town Gang tattoo featuring prominently on his arm. Realizing that he was the one who killed her father, she points her gun at him; he does the same in turn.

Meanwhile, Bigfoot finds Kate's car with some blood, and uses his special sense of smell to track her.

In the apartment, Jimmy recounts how he planted the bomb in his first big job, and then drops his gun, not willing to harm Kate. She angrily confronts him at gunpoint. He explains that her father was in fact the target of the bombing, because he wanted to make a deal with the police. Kate orders him onto his knees, but Bigfoot arrives in time to talk her out of doing something stupid.

Magnus enters the Duke's office and informs him that he must release Will first, but he points a gun at Will and demands to see Jimmy. Magnus seems to give in and opens the door, revealing Jimmy -- but only to the Duke, everyone else sees nothing. Still, his thugs follow his order to release Will, and the Sanctuary agents leave. Moments later, it is revealed that Sally the Mermaid is actually projecting an image of Jimmy into the Duke's mind.

The Duke and his gang confront Magnus and Will out on the street, but Bigfoot, Jimmy, and Kate arrive in a van. Jimmy and the Duke end up pointing their guns at each others heads.

Jimmy promises the Duke that he will come along peacefully if the Sanctuary team is allowed to leave. He apologizes to Kate one more time, and gets into Duke's car. Duke wants to see the elemental, and Jimmy reaches into his pouch.

In the van, Magnus discovers that Jimmy has switched the container with the elemental in it with one of the team's C4 charges. Seconds later, the Duke's car is blown to pieces by a powerful explosion, leaving Kate shocked.

In the night, Will inquires what kind of thank you gift he could get Sally, to which Magnus tells him to go swim with Sally -- without a suit. Later, Magnus meets with Kate and apologizes for missing Kate's and Jimmy's back story. Kate, on the other hand, realizes that she has blamed this one fateful moment for all that went wrong in her life, and that, in the end, it is her responsibility to make her life what she wants it to be.

Henry, Will, and Kate

Kate and Helen
Add a photo to this gallery

Retrieved from "https://sanctuary.fandom.com/wiki/Penance?oldid=22045"
Community content is available under CC-BY-SA unless otherwise noted.