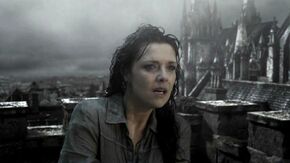 "Pavor Nocturnus" is the fifth episode of the second season of Sanctuary, and the eighteenth episode overall in the series.

Magnus wakes up to find the Sanctuary in ruins and the entire city mostly destroyed with no memory of how the devastation occurred.

Dr. Helen Magnus wakes up in a hallway in the Old City Sanctuary. A strange cloud of energy briefly appears before her, but vanishes after a moment. The walls and the floor are dirty and full of spider webs, and the light switches do not seem to work. Rain falls in through holes in the ceiling. Magnus gets up and walks around, finding everything in a state of decay, as if not touched by a human hand for years. She makes her way to the roof, only to find that all of Old City lies in ruins.

Magnus finds herself a coat and goes looking for her team, but finds every room in the Sanctuary deserted. The main lab and the cages for the Abnormals are all destroyed. She eventually makes it to the outside and searches for a usable weapon, but with little success. She ends up with a spear and tries to finds a working car, when she is suddenly attacked by a stranger with a long brown tongue and a needle that comes out of it, these creatures also have a green venom like spit that come out its mouth. Before he can attack her further, he is shot by two other strangers in biohazard suits, who also shoot a tranquilizer dart at her.

She is taken to an underground room where the strangers strip her naked, shower her and give her new clothes. She is then left to wait, until another stranger appears, who turns out to be Dr. Will Zimmerman. He asks her for her name, and denies that she is Helen Magnus, and explains that Helen Magnus died three years ago.

Magnus and Will discuss her identity, while the perimeter Will and his fellows have established is surrounded by more of the zombie-like strangers. Will, whose left eye is blinded, tells her that she died in the Battle for Buenos Aires. Before she can even try to offer an explanation, the perimeter is attacked and Will leads the defenders against the zombies. One of the defenders, Jason, is bitten by the attackers and Will kills him instantly. They then return inside to find Magnus gone, with one of their weapons.

Magnus enters an underground railway station and is attacked again, but this time by a young teenage girl she easily overwhelms. The girl begs her not to kill her.

Back in the ruins of the Sanctuary, Magnus and the girl, Jessica Mitchell, find something to eat, and talk. Jessica explains that they will soon be found, and should keep moving, but cannot answer Magnus' question as to where else they should go. After the girl is asleep, Magnus checks her old computers, only to find a record of herself explaining that "the plague" has spread and that they have to evacuate.

Magnus checks more rooms in the Sanctuary, only to stumble upon a badly hurt Will, who is the only one who survived the last attack. She attends to his wounds and he explains that she died in an Air Force strike, but the last thing she remembers is a mission to South America.

Will describes the plague, which turned large parts of the worlds population – both human and abnormal – into mindless, cannibalistic monsters. Cities were evacuated, Sanctuaries abandoned, but nothing helped, and eventually the government used tactical nuclear weapons to take the infected out. This solution also failed, and now only about one hundred thousand normal human beings are left on the planet.

At this moment, Jessica shows up and collapses in front of them. Realizing that she is infected, Will wants to kill her, but Magnus wants to use the five hours they have before the girl will change to try and find a cure. Meanwhile, the other infected zombies advance on the Sanctuary.

After Jessica is secured in the lab, Magnus checks her "own" research on the plague. Will sees little sense in this, telling her that she has tried all this in the past. Just then, the infected arrive. They manage to take out a number of them, but Will eventually flees the scene. Meanwhile, Jessica continues to go through the transformation cycle which is causing her more and more pain.

Magnus goes through her own work, finding that Henry Foss was among those she could not save from the plague. The strange energy cloud appears again, and Magnus gives it a suspecting look.

Will returns with supplies he missed while evacuating and uses them to generate more power for the computer system. They try to figure out where the plague came from and if it can be stopped in an early stage. Magnus asks what happened to the others; Henry built weapons for the government until he was himself infected, Bigfoot stayed behind in the Sanctuary until his death, Kate Freelander was killed leading others into the fight, and John Druitt took a tactical nuke and teleported into the middle of the enemy, destroying most of Boston.

Magnus tries to treat Jessica, but her situation is getting worse. Will says he respects Magnus' spirit, but it is all just more stuff for the archaeologists to find. This notion makes Magnus remember something: Ten years earlier, shortly after her daughter Ashley's death, she went to Honduras to search for the tomb of a Mayan king, in order to find a way to grow old and die because she was tired of outliving those she loved. The Mayans were abnormals, and died out all of a sudden for no reason. They conclude that the virus that wiped out the Mayan civilization has mutated and returned.

At this moment, Jessica is moving further along in the transformation process and calls for the other infected. Will kills her, but it is too late: the enemy arrives and Will finally tells Magnus that he is himself infected after the last skirmish with the infected. He offers her his help for as long as he can, but in turn asks her to finish him off when his time has come.

The infected hunt Magnus and Will through the Sanctuary. They make it to the main lab, where Will orders her to let no one in. He explains that he and Kate were lovers and had a son named Magnus Zimmerman, and asks Helen to find him. Then he leaves to fight the infected to the end.

Magnus checks more of her own records concerning the Honduras mission, and remembers opening a small vial of Maya origin. The energy cloud reappears, but she does not notice it. Realizing that she released the virus when opening the vial, she is returned to the Mayan temple, ten years earlier: the energy cloud is the Guardian of the virus, a time traveling abnormal who showed her the future that was to be in order to keep her from opening the vial. He will not let her destroy it, but assures her that it will be safe where it is.

Magnus returns to the Sanctuary to find everything fine. Will visits her, being in a good mood, and inquires if she found anything. She says the trip was unsuccessful, and they end up looking out of a window to see a beautiful day in Old City.

Will Zimmerman
Add a photo to this gallery

Retrieved from "https://sanctuary.fandom.com/wiki/Pavor_Nocturnus?oldid=21786"
Community content is available under CC-BY-SA unless otherwise noted.