Start a Wiki
Out of The Blue 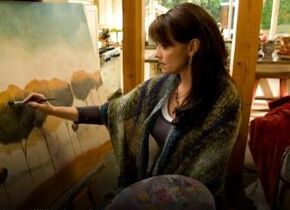 Magnus in another life.

"Out of The Blue" is the nineteenth episode of the third season of Sanctuary, and the forty-fifth episode overall in the series.

Magnus and Will find themselves in an alternate reality, living as suburban neighbors, who experience unsettling dreams that disrupt their new careers.

Its a fair morning somewhere in the suburbs; Dr. Will Zimmerman has forgotten to take out the trash, and is just moments too late to catch the garbage truck. Abby Corrigan, his pregnant wife, comes out to kiss him goodbye as he drives off to work. Just when Will wants to start the car, he notices a white cat sitting on the rear window; he rolls his eyes, catches the struggling animal, and takes it to their neighbor across the street -- Helen. The two obviously do not get along very well; they fight about the cat and the Zimmermans' dog, when suddenly a strange apparition appears behind Helen. Will rushes past her into her painting studio, but whatever he saw is gone. Helen angrily throws him out of her house.

The following night, Helen is busy painting, while the Zimmerman's discuss if they should have a water birth. Will, a heart surgeon, thinks it to be useless. He also has an important surgery in a few days; Abby tells him it will work just fine, and that his mother will be proud. Hearing these words, Will has a vision of his mother, covered in blood and looking down on him into a tent, a strange creature attacking him -- and a faint image of Helen holding him and saying "it's all right". Distraught, he gets up to call his mom.

Meanwhile, Helen has fallen asleep on the couch, and has a vision of herself and Will in some kind of laboratory, half submerged in water. She wakes up just as Will has a similar vision in his bed. Both of them get up and notice each other in the window. Will quickly closes the curtains.

Next day, Will and Abby talk about District Attorney John Druitt, who has just convicted a criminal called the 'Old City Ripper', as well as about their bad dreams. Meanwhile Helen's painting is interrupted by more visions, causing her to paint symbols from her vision all over her most recent work. The doorbell rings. It's Abby, bringing some food as a gift and trying to make conversation. When she asks if Helen has any children, Helen has a vision of Ashley Magnus, her daughter in another life. Seeing how much the question disturbs the other woman, Abby apologizes and leaves.

When Will comes home from work, he sees Helen going through her mail by the street; they both have sudden visions of each other in battle gear and with weapons, and realize that something is wrong.

Both Helen and Will continue to paint the symbols from their visions, and have even more of them while they both try to work: they see themselves in the strange lab, with several scientists conducting tests on them. Will also sees a vision of a large insectoid creature crawling over Helen's house.

Next day, Helen gets a call from her agent, and angrily tells him that she cannot work at the moment. She gets some anxiety medication from the kitchen; the label on it says "Helen Druitt". She takes a pill, and utters, "This isn't right". Moments later, she falls asleep and has another vision; a scientist approaches her in the water tank where she rests, and makes her go back to sleep. When she wakes up, her estranged husband, John Druitt, is at the door. He tells her that he wants to quit as District Attorney and have a normal life with her. She angrily tells him that she doesn't want him back; he tries to convince her that he will do anything to make her happy. As she yells that this life seems wrong to her and that she wants something else, but does not know what, he leaves, telling her she has to chose her true happiness.

Will has another vision, this time being fully awake in the mysterious laboratory, and being sedated by the scientists around him. Abby asks him to tell her the dreams, and he mentions the lab, and Helen. He also says that he cannot remember a lot of things, including their honeymoon. He then goes to see Helen, but she is asleep on the couch again. When he leaves, he sees the paintings over which she painted the strange symbols they saw in their dreams.

Helen has another "vision" as well, and attacks the scientists in the lab; they hold her, and a young man approaches, telling her she will lose if she tries to "beat the house on this one". She is sedated again.

When Abby returns home, Will is busy connecting Helen's paintings so they form a larger set of symbols. He tells her that he cancelled the important surgery, having deemed it too stressful. She says he is having a breakdown, and wants to get a doctor. He tells her that everything feels wrong to him, that he doesn't belong here. Abby becomes very upset, accusing him of trying to find an excuse for abandoning her before the baby comes. The stress is so great that she goes into labor. Helen rushes to her side and quickly diagnoses pre-eclampsia. Both she and Will are completely surprised that Helen seems to have advanced medical knowledge.

Some time later, Will visits Helen and tells her that her diagnosis was exactly right. They have tea, and talk about how their lives feel wrong to them. Will asks about kids, and Helen states that she and her husband never had any -- but once again, pictures of Ashley flash through her mind. He also calls her 'Magnus', although he has no way of knowing her maiden name. They come to the realization that their lives are not real, and tell each other about the dreams, and the laboratory. Will suspects that the dreams are the actual reality, and everything else is a dream: they are being held in the laboratory, and forced to imagine a false life.

They then both take the anxiety medication, causing them both to awaken in their tanks in the lab. One of the technician tells them to "stop fighting it". They can both remember this when they get back to the dream, and realize that whenever they try to get out, something inside tries to keep them there, like John's sudden declaration of love of Abby's outbreak. Helen suggests that they should try to kill themselves in the dream in order to get out for good.

When they get into the car to drive off, John and Abby appear at the same time, trying to convince them to get out. Helen races away and off a cliff, just before Will says he's been here before.

They both wake up in the lab and get out of the tanks. The lab tech appears along with Virgil St. Pierre -- as well as Henry Foss and Kate Freelander. They explain that they are in a private research facility in New Mexico.

Three days ago, the Sanctuary Network was called to the Mexican border, where something massive was coming out of the ground. Magnus believed it to be an off-season migration of Rock Lizards, but was then hit by a giant Psych Worm that uses psychoactive venom to send its victims into a dream world while it devours them. The team then brought them to St. Pierre's lab to treat them, and had to keep them in the dream-state until the synthesized antidote (created from venom samples collected from the worm's salivary glands) had finished reversing the effects of the venom; restoring their minds to show proper brain function again. If they came out from under the treatment too soon, their minds would have been damaged.

Looking at the captured abnormal, whose body markings resemble the symbols she and Will saw all the time, Magnus notes that something this large could only have hidden in Hollow Earth, to which Henry replies that they have received reports from Sanctuaries all over the world and are currently on high alert. Magnus points out that they have to head home.

Will, Helen, and Henry

Will and Henry
Add a photo to this gallery

Retrieved from "https://sanctuary.fandom.com/wiki/Out_of_The_Blue?oldid=21816"
Community content is available under CC-BY-SA unless otherwise noted.