Start a Wiki
One Night 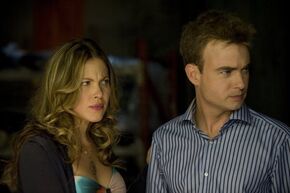 "One Night" is the thirteenth episode of the third season of Sanctuary, and the thirty-ninth episode overall in the series.

Looking to share a quiet, "normal" evening out with Abby, Will and his date are abducted en route to the restaurant by a desperate gang leader who faces certain death without their help.

Dr. Will Zimmerman is on his first date with Abby Corrigan. They walk through the nighttime streets of Old City, making fun of each other psychiatrist style, and though they play it cool, their attraction to each other is more obvious than ever. As they joke and laugh, they suddenly find themselves surrounded by a group of armed men. They hand over their wallet and purse, but the robbers show little interest in them, taking the couple hostage. They are taken to a building where a young women introduces them to a mortally wounded man. She explains that if Will does not save the man's life, both he and Abby will die.

After a few words of talking, Will realizes that the gang actually wanted to kidnap Dr. Helen Magnus, whose name he used for the dinner reservation. As "shrinks", he and Abby have little qualification to help the gang's leader, who has been hit in the leg by a number of Abnormal toxic quills. Will can identify them as those of a Mongolian Jessaped, a predator from the Eurasian tundra; he explains to the young woman that leads the group that the patient can only be treated in the Old City Sanctuary, but she refuses to even consider it, saying that he has one night to do the job.

Abby, who has identified their kidnappers as members of the Vendetta Crew, an organization of professional killers, admits to Will that she has phobia against sharp objects like needles. Will removes the quills, causing the patient to go into toxic shock. Abby leaves for the bathroom under the watchful eyes one of their kidnappers, while Will remains with the patient. Once Abby has knocked out her guard, Will grabs a gun and forces the rest of the gang to drop their weapons. However, the escape attempt fails when Abby is recaptured moments later. They continue trying to help the injured man, but Will accidentally causes him to have a heart attack.

Will frantically tries to revive the patient, and succeeds after realizing that the man is an Abnormal. The young woman, Sioux, explains that he is a pure-blooded Septerran. She also renews her threat to kill them if they fail.

Back in the Sanctuary, Kate Freelander gets an angry call from the restaurant Will and Abby never showed up at. She does not believe it to be a big deal, but Bigfoot is not so sure.

Abby is sent to recover a number of Red List abnormals for the further treatment; a man named Koda accompanies her to Old City's China Town, where she eventually manages to get away from him by getting him to open a box with a Moroccan Cave Scorpion inside. Just as Sioux receives word of this, Will makes another attempt to flee; once again, Sioux overwhelms him and is ready to kill him when Abby returns on her own accord to save his life.

When Will asks Abby why she returned, she remarks that she has no intention of ending their date, which she insists is going quite well, really.

In the Sanctuary, Kate and the others hear from their informers about a woman purchasing red list Abnormals, and realize that Will must have sent Abby on the "shopping tour" in order to get their attention. They start looking for them, and soon hear about the attack on the Vendetta Crew and their local leader, one Horatio Gibbs. Kate and Declan MacRae are able to locate the building where their colleagues are held, and decide to go in with a Sanctuary tactical team.

Meanwhile, Will continues to work on the antidote for the Jessoped poison. However Will realizes that something is wrong.

Just as Kate and Bigfoot are ready to move, Declan arrives, telling them that the mission has been cancelled on the direct authority of Helen Magnus herself.

Magnus informs the team that the Vendetta Crew and Horatio Gibbs are of special interest to the Beijing Sanctuary, because Gibbs knows the whereabouts of the "Ghost Ship", a vessel with hundreds of Abnormals aboard, to be sold as slaves on the black market. If they storm the building, Will might not have a chance to keep Gibbs alive long enough for them to find out what he knows.

In the Vendetta Crew's hideout, Will confronts Sioux about her lies; the man on the table is not a Septerran, but a rare hybrid, and the plan was to kill him, not save him. Sioux was so appalled by the idea of dealing with slaves, and wanted Gibbs out of the picture. Just when Will explains that the counter-toxin he created will achieve exactly that, Koda shoots her from behind, and reveals that he has infected Abby with the Jessoped poison as well.

The Sanctuary team keeps monitoring the gang's hideout, while Koda forces Will to work on modifying the antidote. Abby has increasing trouble breathing. Will eventually administers the antidote to Gibbs, who quickly regenerates and stands up, ordering Koda to gather his men, as they have a shipment to catch. He also destroys the remaining antidote before leaving. However, Will has taken aside a small portion of the compound, and gives it to Abby once the gangsters have left. He gently kisses her in order to distract her from her fear of needles, and she remarks that she did not feel anything. Some time later, Gibbs and his gang arrive at the harbor to await the arrival of the ghost ship, when Sanctuary intervention forces led by Kate and Bigfoot step up and arrest them all. On the following day, Dr. Magnus has returned to the Sanctuary and tells Will that he did well. She is, however, not amused about his booking a table at her favorite restaurant using her name.

Will Zimmerman vs Crew

Abby, Will, Horatio, and Sioux

Will, Horatio, and Sioux

Sioux
Add a photo to this gallery

Retrieved from "https://sanctuary.fandom.com/wiki/One_Night?oldid=22263"
Community content is available under CC-BY-SA unless otherwise noted.