The Old City Sanctuary was the headquarters of the Sanctuary Network, located in Old City on Grayson Street.[1] The facility was run by Dr. Helen Magnus herself; being its primary House Head.

It was a huge complex built in a neogothic architectural style. It housed a number of comfortable guest rooms as well as individual cells for the more dangerous of its inhabitants.[1]

Helen Magnus founded the Old City Sanctuary at some point in time during the span of 39 years between her ill-fated voyage to America aboard the Titanic in April 1912 [2] and when Bigfoot was shot in 1951.[3] She created it to serve as her new home and main base of operations for the Network while Dr. James Watson was left in charge of the Original Sanctuary back in London.[4]

For the next several decades, the Sanctuary housed many Abnormal inhabitants and staffers, and served as a refuge from the dangers of Old City and the rest of hostile world.

In early-2012 the Old City branch was invaded by group members of the Abnormal Insurgency, led by Caleb. Helen Magnus was able to defeat them, but also triggered the self-destruction of the facility in order to go into hiding at the new Underground Sanctuary. The Old City facility was completely destroyed by a number of huge explosions. Its fiery end could be observed even from skyscrapers on the other side of the river in New City.[5]

During her preparation just prior to the destruction of the building, Helen Magnus had removed all of the Sanctuary's data from its computer system's, likely moving it all to the Network's secure off-site cloud that was mentioned in Episode 4x09 - "Chimera".

The auto-destruct program was located on the computer system under: *\PORT1\DRIVE3\SYSTEM\SECURITY*\PLANS\A1.HTF4

These are people / Abnormals who have either visited and or also stayed over-night at the property.

There are several featured areas in and around the Sanctuary property. The mass majority are located within one of two prominent sections of the facility. Please explore the following two listed article pages for more details about what areas each section contains.

"Navigational Markers" Depending on which elevator or set of stairs characters use, it helps to orient the viewer on where the character is around the property.

A sitting room in the
Old City Sanctuary
(Web Series) 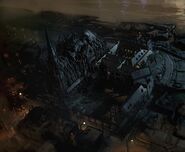 Retrieved from "https://sanctuary.fandom.com/wiki/Old_City_Sanctuary?oldid=22354"
Community content is available under CC-BY-SA unless otherwise noted.