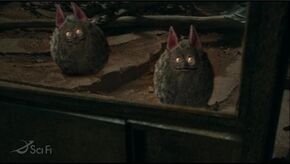 Nubbins is the sixth episode of the first season of the Sanctuary TV Series.

When a mating pair of cute, furry and seemingly harmless abnormals is brought in for scientific study, the Sanctuary team begins to exhibit some hidden animal attractions for one another.

A Sanctuary helicopter focuses a searchlight on the cargo ship Lophelia in open water. Will, Ashley and Helen Magnus board the vessel and enter the ship's dark cargo hold. Another Sanctuary agent, Eric, has promised them something that they have "never seen before"; however, Eric is now dead. He and his team have been ripped apart and half-devoured. Further investigation reveals several empty transport cages that lay crushed and pried open, "like something clawed or chewed it's way in". Ashley discovers two quasi-invisible furry creatures in a single remaining undamaged cage. Then a large, quasi-invisible beast begins growling at them. Magnus orders "tranquilizer rounds only". Ashley's not sure, but her mother says "Eric paid with his life to bring this creature back. We owe it to him to preserve it". Ashley replies back "We owe it to him to kill it" but makes no further moves, allowing her mother time to switch out her rounds first before she herself follows suit. As the creature charges the group, Helen fires two tranq rounds, subduing the beast.

Safely back in the Sanctuary's lab, the team discusses the new creatures. Ashley has dubbed the small ones nubbins. However, wounds on the bodies of the crew show traces of both creatures. Henry, sneezing uncontrollably, turns out to be allergic to the small creatures. The opening notes of increased sexual tension sound as Ashley is talking about her nubbins and Henry is obviously thinking of something else. He looks pained and forlorn when Ashley asks “Don’t you just want to squeeze them?”

Meanwhile, a young woman named Sophie has arrived at the Sanctuary with the body of her grandfather, who wanted Dr. Magnus to perform an autopsy on him. He had lived out his last years at a sanitarium believing that he was an abnormal. Somehow he had known about the Sanctuary. Will attempts to comfort a painfully defensive Sophie but is evasive when Sophie wants to know what goes on at the Sanctuary.

Late at night up in her study, Dr. Magnus is researching documented accounts of the Nubbins. She is soon joined on her couch by Will and proceeds to explain to him how equatorial cultures considered Nubbins both harbingers of fertility and 'portents of discord' when they vanish. As she talks, Will seemingly draws closer to her; both appear to become 'distracted' and perhaps slightly aroused during their brief conversation while in close proximity to each other.

The next morning, the team awaken to discover that the female Nubbin has given birth - to fourteen baby nubbins. Ashley is increasingly drawn to the little Tribble-like creatures, declaring to her mother that she wants to keep one as a pet, to which Helen advises caution. The predator creature, on the other hand, is becoming agitated - as is Sophie when she learns that she might share her grandfather's anomalies. Magnus has Will give her a tour of the Sanctuary so that she might better understand. Sophie is surprised at what she sees but takes it well. Her extra-sensory perceptions seem to be increasing, making her weak and dizzy at times.

Upstairs in the early afternoon, Ashley is in her room absently cuddling with a nubbin when Will walks in to check on her when he notices a nubbin missing from their enclosure. When Will wants Ashley to put the Nubbin back in it's cage, the nubbin reacts defensively and urinates on him. Apologetically, Ashley haphazardly locks the Nubbin in it's cage and rushes over to Will and begins to unbutton his shirt. She then grabs a laundry basket to discard the soiled shirt and a towel to dry off his chest, somewhat murmuring incoherently during the process. At Will's request, Ashley parts his side momentarily to fetch him a replacement shirt. Both by now have become oddly and obviously aroused; they almost kiss but are startled when the cage door breaks open suddenly and the nubbin that was once inside it has now disappeared. A Nubbin is next seen eating away at the metal grating and piping beneath their habitat. All of the Nubbins escape into the Sanctuary shortly thereafter.

Dr. Magnus initiates a complete lock down of the Sanctuary, slightly opposed by Ashley who's still being protective of the nubbins. It isn't long before Bigfoot walks into Helen's office to advise the team that all of the food stores have been emptied, including the walk-in and the pantry; the only food left being a pitiful slice of cheese.

They go 'floor by floor' with flashlights, snares and tranquilizers - to no avail. One of the creatures gets scared and bites Henry. When told that he may need a complete series of painful rabies shots Henry argues with Ashley : “Hey, listen, I know you’re all about saving the whales and everything, but these guys just happen to be a pack of vicious, over-sexed, hyperthyroid invisi-rodents”. Rodents who now may number at least 70. Ashley is chastised by her mother for her lack of judgment. The futile Nubbin search continues as Dr. Magnus examines Sophie, who is worried when she learns that she has the same extra ‘tissue structure’ in her brain that her grandfather had.

When Dr. Magnus reveals to Will that the Nubbins emitted powerful pheromones, he is embarrassed and denies noticing the ‘arousal effect’. “Awkward”, he says. “Poor thing”, replies Dr. Magnus. The computers begin crashing because the Nubbins are now chewing their way through the infrastructure systems. They've gotten into 4 out 5 of the systems: computer, cooling, electrical, and air purification. They're not in the water... yet. Dr. Magnus considers releasing the predator beast to curtail the Nubbin explosion.

She decides to implant a tracker/controller in the creature. Sophie senses that the beast is frightening the Nubbins. Despite Will’s attempts at comfort giving, her ‘gift’ makes her feel like a ‘freak’ who belongs in a sideshow. Henry gleefully uses a giant vacuum to capture a Nubbin.

Then the ‘predator’ is released and begins herding and killing the fleeing Nubbins. The tracker indicates that the ‘beast’ has stopped just outside the library as power fails and the lights go out. Will and Helen investigate and find blood and chewed Nubbin all over the place. Then, in the library, they find the bare carcass of the now dead beast. “Looks like our predator just became prey”, Will quips. Dr. Magnus opines that they may be next.

Will remembers the hold of the cargo vessel was set to 50 degrees and Dr. Magnus conjectures it may have been an attempt to slow the Nubbins metabolism. The team round up fire extinguishers as the frightened Nubbins begin to send out warning cries. Dr. Magnus and Henry determine that the Nubbin distress call is at the ultrasonic sound level of 21.5 kilohertz. They set up sound emitters to herd the creatures so they can be ‘chilled’ by the fire extinguishers. Once ‘asleep’, the Nubbins are returned to their now chilled habitat where they can “live out their days in relative peace”. Sophie, coming to terms with her ‘gift’, prepares to leave the Sanctuary.

Will, Nubbins, Ashley, and Helen BTS

Helen, Ashley, and Will

Sanctuary Nubbin Prop BTS
Add a photo to this gallery

Retrieved from "https://sanctuary.fandom.com/wiki/Nubbins?oldid=15969"
Community content is available under CC-BY-SA unless otherwise noted.