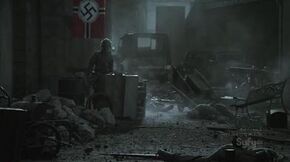 Captain Zimmerman on the battlefield.

"Normandy" is the seventeenth episode of the third season of Sanctuary, and the forty-third episode overall in the series.

In a look back to World War II, Helen Magnus, James Watson, and Griffin experience the events of D-Day... and Magnus' role in one of the most important events in history is described.

In Normandy, France, during the Second World War, a German major stops a passing tank and inquires about its destination. After the vehicle's commander explains that they are on their way to repair a broken chain, the major notes that the other man has an interesting accent, and asks where it comes from. Becoming more and more suspicious, he asks to see the man's orders, and also reveals that he himself is from the same area he claims to be from. He orders the whole crew to leave the tank, to which the tank commander answers in English that he can't do that. Realizing they have been tricked, the Germans attack, but are quickly overwhelmed by an invisible force -- and a single cannon shot.

Dr. Helen Magnus emerges from the tank along with the commander, who turns out to be Dr. James Watson. Nigel Griffin, the Invisible Man, de-cloaks in front of them, completely naked and noting the freezing climate with a wide grin. Magnus just rolls her eyes, and says, "Welcome to France."

In the middle of the woods, the three members of The Five meet with Jeanette Anaise, leader of the local Résistance cell, who informs them that preparations for their operation are in progress. They tell her about a secret facility where the Nazis are testing a new weapon that is to be used against an Allied invasion force. Jeanette notes that the weather in the area has been very strange lately, with far too much rain. This is consistent with the Five's suspicions that the SS is in possession of a device that can change the weather and produce storms. They need to destroy it and get their hands on the schematics.

Meanwhile, at the Allied Expeditionary Force's headquarters in Portsmouth, Nikola Tesla is working with American and British soldiers. He is annoyed by the fact that there is no more black tea due to the Japanese invasion of China.

Back in France, Magnus, Watson and Jeanette are walking down a street when they come upon a German patrol. A firefight ensues, and Watson is shot in the leg and captured while Griffin is able to get the others out in a car. A German Wehrmacht colonel approaches, greeting Watson by his name and revealing that they know about him and Tesla.

From a safe place in the woods, Magnus and the others watch as another SS officer arrives at the scene. In the bunker below the city, Watson is shocked to discover that the man in question is John Druitt.

Druitt tortures Watson by turning off the device that keeps him young. Even though he is in enormous pain, Watson reveals nothing; eventually, Druitt restores him, and orders him to be moved to Berlin to slowly torture him further.

In the middle of a firefight in the woods, Magnus uses an autotype to send a partial message to Tesla, who immediately request to talk to General Eisenhower. The commander-in-chief of the Allies refuses to delay the invasion of Europe, but Tesla insists that the message -- which reads simply "Druitt is" -- is the greatest possible danger to the war effort. He wants to talk to the General himself, but Operation Overlord has already begun; the sky is covered with warplanes on their way to the French coast.

While Magnus explains to Jeanette that only Watson can turn off the weather-changing device, Druitt frees Watson and explains that he fights the Third Reich in his own way; he even tried to kill Hitler months ago, but the Nazis are using body doubles of the Fuehrer. In order to get them all to France to fight against Hitler's plans involving Abnormals, he leaked information about the weather machine himself.

Meanwhile, Griffin hides from a German patrol in a barn. The soldiers search the place, but are suddenly gunned down by a force of U.S. Army soldiers. They are part of Fox Company, 101st Airborne Division, and their commanding officer is Capt. Jack Zimmerman.

Griffin tries to convince Captain Zimmerman that they have to help him assist his friend, but the Captain is under orders to clear a way from Utah Beach, in the opposite direction.

Meanwhile, Druitt and Watson get in a fight, as Druitt believes his old friend to be involved with Magnus. Watson on the other hand accuses him of hurting Helen more than he can imagine. Eventually, having let off enough steam, the two agree to teleport out of the bunker, but rematerialize in the same room again. Something keeps them from leaving.

Magnus tries to use her charms to get into the café that leads into the bunker, but is caught by Colonel Kobra. The colonel takes her to Druitt and Watson and explains that the bunker's walls are made of loadstone which keeps Druitt from teleporting; he also reveals that Druitt did, in fact, kill Hitler, and the High Command has taken control of the Reich and the war effort using a double. He then shoots Druitt in the abdomen and has him taken away.

Griffin tells Captain Zimmerman about the weather machine; they eventually make contact with Tesla via autotype. The Captain eventually decides to help Griffin and Jeanette get into the bunker.

Meanwhile, Colonel Kobra interrogates Watson and Magnus, and reveals that he is actually in command of an SS Abnormal hunting division. He also reveals that the Abnormal inside the weather machine is not a Giant Sand Ray as they had suspected, but a Fire Elemental, one of the most dangerous creatures on Earth. The machine merely contains it until the Nazis are ready to unleash it on their enemies.

While Captain Zimmerman's force enters the Nazi compound, the Colonel continues to torture Watson and removes a vital part from his protective armor before leaving when word of the American attack arrives. Magnus is left to watch Watson's agony. However, moments later, Griffin and Jeanette arrive and free them, saving Watson just in time.

Meanwhile, the liaison officer working with Tesla in Portsmouth enters Tesla's office and begins to copy some data when the autotype suddenly starts to type. He takes the message, which simply reads "Auf Wiedersehen" -- German for goodbye. Tesla enters in his vampire form, asking him what it was that turned him into a traitor. The officer reveals that his family are Nazi sympathizers, and that he was recruited by the SS way back in West Point. General Eisenhower never actually got the information Tesla provided. The officer is taken away to be tried for treason.

Back in the Nazi compound, Captain Zimmerman ducks under enemy fire when he is suddenly saved by a group from the 101st's Easy Company.

In the woods, Magnus and the others try to find a way to the Fire Elemental when a German tank attacks.

Allied bombers and Captain Zimmerman arrive to save the team, and Magnus and Watson make their way to the Elemental. Watson discovers that his machine is being used with the wrong configurations. He uses it to create a massive wind that forces the Elemental to hide in the depth of the Earth. The liberation of Europe can begin.

Outside, Colonel Kobra is killed by Druitt. Magnus and Watson find him, but he teleports away. They also discover that Captain Zimmerman is dead from a gunshot, and Magnus tells his sergeant that what they accomplished on this day would not be forgotten.

The episode ends with a dedication title card:

"DEDICATED TO ALL THE MEN AND WOMEN

WHO SERVE IN THE ARMED FORCES.

THANK YOU FOR GIVING US SANCTUARY."

Retrieved from "https://sanctuary.fandom.com/wiki/Normandy?oldid=21814"
Community content is available under CC-BY-SA unless otherwise noted.