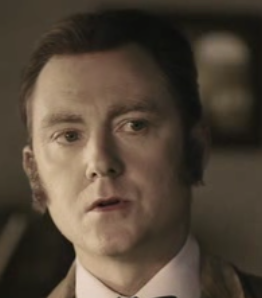 Nigel Griffin was a human-born Abnormal, a member of The Five, and the template for the Invisible Man from H. G. Wells' eponymous novel.

A member of the Five, Nigel became an abnormal with the power of invisibility and was the basis for Wells' novel "The Invisible Man".

Unlike his fellow Five members, he is hinted at having been from a lower class background, and had a distaste for most of high society. He seemed to have been the only member of the Five who got on exceptionally well with Nikola Tesla, with the two constantly playfully trading barbs about their past. He was also the first person to notice the bizzare behavior of their fellow student Adam Worth. Having seen some of the man's experiments, he told Helen Magnus that rather than thinking of them as daring, he saw them as twisted.[1]

Like most members of the Five, Griffin served as an agent for the Allies during World War II. He helped Magnus and Watson in preventing the Nazis from using a fire elemental against the Allied invasion fleet on D-Day.[2]

Years later, Griffin died the early 1960s. This would cause a problem; as the only way to secure the sole vial containing pure vampire blood needed to cure the Cabal's Lazarus Virus would be for the entire Five group to pass a series of tests. Fortunately, Griffin had fathered a daughter, Anna Griffin, who herself had yet another daughter, Clara Griffin. Both inherited their father/grandfather's ability to cloak more or less at will.[3]

Retrieved from "https://sanctuary.fandom.com/wiki/Nigel_Griffin?oldid=19649"
Community content is available under CC-BY-SA unless otherwise noted.