Start a Wiki
Next Tuesday 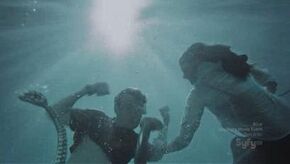 Will and Magnus face the vampire squid.

"Next Tuesday" is the eighth episode of the second season of Sanctuary, and the twenty-first episode overall in the series.

Will and Dr. Magnus' helicopter crashes on a decommissioned oil rig in the Gulf of Mexico while carrying an Abnormal. However, not only does the Abnormal escape, but returns even angrier, threatening the lives of the two.

Dr. Helen Magnus and Dr. Will Zimmerman are in the cockpit of a small helicopter, and Will has problems keeping the vessel under control. A giant tentacle crashes through the cabin, and the helicopter goes down on an oil rig.

In a flashback, Will and Dr. Magnus walk through the Old City Sanctuary, and Will tries his best to convince his boss to let him go to a conference in Reykjavík. She tells him that he has other things to do, as a Vampire Squid has been discovered in the Gulf of Mexico. As Henry Foss and Bigfoot are on vacation, and Dr. Magnus has to attend a meeting with her UN Security Council liaison in Berlin, Will will have to stay at the Sanctuary and cannot attend the conference even after they have secured the squid.

Back in the present, in the Tahiti Field Oil Reserve, 305 kilometers south of New Orleans, the helicopter has crashed into the oil platform and the squid has escaped.

Flashback: an hour earlier, Will helps Dr. Magnus to take the container with the vampire squid out of the water. He still tries to convince her to let him go to Reykjavík, but she refuses.

In the present, they cannot get a transponder signal, and the cables that hold the helicopter are getting more and more unstable. They argue about something always being in the way of private life, when a cable breaks and they are tossed into the water, where the vampire squid is circling. Dr. Magnus accuses Will of just wanting to meet with a woman that will be attending the conference, when suddenly Will is dragged beneath the water by the squid.

Dr. Magnus gets a knife and stabs one of the creature's tentacles in order to free Will. They return to the surface and try to figure out a way to escape. Dr. Magnus wants to send the squid a message by putting an electric cable into the water, giving the creature a shock. However, this drains their only battery. While they change clothing, Dr. Magnus again marks how docile vampire squids normally are, but Will points out that this one actually brought down a chopper.

Flashback: An hour earlier, Will and Dr. Magnus continue their discussion after the container is secured in the helicopter. Dr. Magnus asks Will to sit in the back to take care of the creature, but as soon as they start, a tentacle breaks out of the container.

Back in the present, they check the helicopter for damage, and Will apologizes for not telling Dr. Magnus of the woman at the conference. He asks her if she doesn't ever need a break, which she answers with "not really". Will then asks her if she's ever been stranded at sea before and she replies that it happened only once, on April 14th 1912, implying she was on board of RMS Titanic. They discover that there are air vents in the walls around them, which they could use to escape. Dr. Magnus makes the trip with a transponder, while Will stays with the helicopter to distract the squid. However, when Dr. Magnus tries to open the vent, her arm gets sucked into it.

Will comes to Dr. Magnus' rescue, and can save her only after the vent stops to suck on her arm. They return to the surface and have to make a new plan. Dr. Magnus realizes that their only chance is to use the cables all around them to connect the transponder to the wall and use the whole rig as an antenna to boost their signal. While they work, they continue to talk, and Will learns that Dr. Magnus only goes on vacation in her villa in Italy every seven years.

Eventually, Dr. Magnus sends a distress signal, but the battery is gone after only one try. Just at this moment, the squid returns without them noticing. They soon discover that their food reserves are gone, and Dr. Magnus finds a strange fluid on the hull of the helicopter. They open the hatch, and are ambushed by a giant, scorpion-like creature. Both Dr. Magnus and Will fall back into the water.

Dr. Magnus manages to close the hatch and explains that the creature is a Southern-Hemispheric Sea Scorpion, an extremely dangerous animal. Will asks how it got aboard, and Dr. Magnus remarks that she knew she wasn't that bad a pilot.

Flashback: When the helicopter starts an hour earlier, the scorpion jumps onto its hull in the last moment, and as soon as it is aboard, the squid gets aggressive and tries to hit the back section of the vessel with its tentacles.

Back in the present, they realize that the creatures must both have claimed the oil rig as their territory. Just when Dr. Magnus explains how intelligent the creature is, the scorpion escapes and attacks Will. Just then, the squid also shows up and the creatures engage in battle. Will is able to harpoon the squid with a tranquilizer arrow, while Dr. Magnus forces the sea scorpion back into the helicopter's engine.

They choose to sink the helicopter in order to get the two creatures away from them. To do this, they torch through the cables that still hold the vessel. Again, they find time to talk, and Will finds out that Dr. Magnus actually wants to meet with Olaf Van Ausberg, a rich friend of hers, in Munich.

At this moment, a cable ruptures and Will almost falls from the helicopter. The sea scorpion appears right on top of him.

As the scorpion prepares to strike at Will, it is suddenly attacked by the vampire squid. However, the helicopter is still above the water, leaving the squid too little room to fight. Dr. Magnus gets the first aid kit and uses one of the signal torches to blow up the helicopter. The explosion destroys most of the vessel, and the wreck sinks to the bottom.

When they return to the surface, Dr. Magnus finally tells Will the real reason why she wants him to stay: next Tuesday is her dead daughter Ashley's birthday, and she did not want to be alone. He understands, and they end up joking, until Will asks how exactly they are going to get out of here.

The abandoned oil rig that Will and Magnus crash into is called: Sonatech 'Red Dog II' Gas/Petroleum Production Platform. It's current status is: Decommissioned.

Retrieved from "https://sanctuary.fandom.com/wiki/Next_Tuesday?oldid=21789"
Community content is available under CC-BY-SA unless otherwise noted.