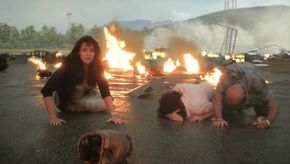 Magnus finds herself in mortal danger.

A hostage situation unfolds when Magnus flies to a remote island off of Africa to meet the Sanctuary's new financial adviser; a shipping container mix up has Will and Henry tracking a missing abnormal.

At the Old City Sanctuary, Dr. Will Zimmerman and Henry Foss discuss the new situation the Sanctuary Network finds itself in now that they no longer have the support of the United Nations. Will has Abby Corrigan coming over for dinner, while Dr. Helen Magnus is meeting with Richard Feliz, a secret ally, on the island of Grande Comore, off the coast of Mozambique. She meets a number of other travelers at Comoros Airport, and gets along with some better than with others. Suddenly, they are attacked by a group of robbers who kill the ground crew and take them hostage.

At the Sanctuary, Abby happily tells Will about her recent promotion to 'Special Agent', and the new office that comes with it. He inadvertently mentions that he loves her, surprising both of them.

At Comoros Airport, the robbers search Helen, who responds by hitting Nicholls in the face. The leader wants to know everybody's account transfer numbers in order steal their funds; when the hostages disagree, he kills one of them (the Canadian Press Photographer). The others give them their account numbers, but it turns out one of them, Dr. Charlotte Benoit, is a research scientist with little money, and Helen appears to be broke as well. Suddenly, one of the hostages, a businessman named Brad Sylvester, draws a concealed gun and shoots the leader of the criminals before fleeing. One of the other robbers, Tyler, tracks Brad through the wall, allowing Nicholls to bring him down with a sonic shockwave she produces by screaming at the walls. As Helen realizes that their robbers are Abnormals, the leader rises behind her unharmed.

The robbers are revealed to be Abnormal agents of the U.S. military who were trained, but ultimately dropped because of the government's recent policy change concerning Abnormals. When the military tried to eliminate them, they fled and began to look for ways to make money. They know that the group is most likely on the island to meet with Feliz, and want to ambush him.

In Will's living quarters, he and Abby, who have obviously spent the night together, are awoken by their cell phones. They both have to return to work, but agree upon meeting again soon.

On Grande Comore, the two human accomplices Chesky and Jonesy find Helen's private jet in a hangar, but are surprised to discover that it has automated self-defense systems, including machine guns. Meanwhile, Helen overwhelms Nicholls and gets her gun, forcing the rest of them into a storage room and fleeing with the remaining 3 hostages who are still alive. As they make their way to the hangar, it is suddenly destroyed by a huge explosion that knocks everyone out; it self-destructed when the criminals tried to board it.

While Will and Henry go hunting for an escaped Stenopelhabbilis from the Beijing Sanctuary in Old City (due to a shipping container mix-up that resulted in the Abnormal getting loose in an IKEA warehouse), the 3 hostages are taken prisoner once more. Helen has escaped, and makes her way to the control tower to get help. However, the only person she is able to reach is the leader of the robbers. After offering him a chance to surrender, she proceeds to recover an EMP generator from the ruins of her plane.

In the sewers of Old City, Will and Henry come across Abby and her partner, Agent Gavin Crealy; it turns out the FBI has created an abnormal investigation unit, and they are looking for the Stenopelhabbilis. Will quickly becomes angry and is about to get in a fight with Abby's partner when she says the two teams should go their separate ways.

The robbers try to find out more about Helen and the other hostages; it turns out Brad is a 'CIA Field Agent', but before Tyler can find out more, the computers are destroyed by the EMP generator. He tracks Helen, and Nicholls is able to take her down with a sonic scream.

Helen is able to get away in the last minute. Nicholls takes Charlotte to the back to interrogate her, but is taken out by Helen, who frees Charlotte and enlists her help.

An angry Abby arrives at the old City Sanctuary and demands to know if Will is responsible for an anonymous call that led her and her partner into an embarrassing trap. When he admits it and tells her it was for her own protection, she breaks up with him and leaves. Moments later, Henry arrives to tell Will that they tracked the Stenopelhabbilis, and they go to look for it.

On Grande Comore, Helen and Charlotte try to "level the playing field"; they lure the leader and Nicholls into a trap. Helen starts a fire in a storage shed, using lit jet fuel and Charlotte's overshirt to create a violent back-draft. Only the leader survives the explosion. They then set the end of the runway on fire (in the shape of a blazing 'X') to keep Feliz's plane from landing; forcing it to divert into a holding pattern.

In the sewers, Will and Henry are attacked by the Stenopelhabbilis, who knocks out Henry. Before he can take out Will, Abby arrives and scares the creature off with gunshots.

The remaining two criminals (Thug Boss and Tyler) arrive at the conclusion that the plane which is circling above the island is waiting for something important down on the ground; as they look at Charlotte's luggage, she informs Helen that she actually works with a dangerous virus where if a small sample were to be released, it could kill everyone on the island and half the coast of Africa.

Charlotte tells Helen that she wanted to give the virus to Feliz because of its dangerous nature. The criminals decide to leave with the virus, and threaten to drop a sample on the island when they leave to "test out their new weapon" they plan on selling to the highest-bidder.

In the sewers, the team is able to track down the Stenopelhabbilis, who has become extremely violent because Abby's partner Gavin dropped Reese's Pieces as bait for it (thinking the creature was like E.T.); it reacts to the sweets like humans would to crack cocaine. After the day is saved, Abby tells Will there might be more "cooperation" necessary between them, indicating that she is not yet ready to give up on the relationship.

On Grande Comore, the criminals leave in their plane, which suddenly explodes in mid-air. What they took was a container of pure nitroglycerin which became unstable in the unpressurized plane. The actual virus is carried in Charlotte's own bloodstream in dormant form. At this point, the Russian man among the hostages reveals himself to be Richard Feliz. He assures Helen that the financial future of the Sanctuary Network will be safe and healthy for a very long time.

As they are about to say goodbye, Charlotte asks Helen if she could stay for a couple of days. Helen at first declines, but Charlotte responds by passionately kissing her, which changes Helen's mind.

Abby, Will, and Henry

Gavin, Abby, Will, and Henry

Abby, Will, Henry, and Gavin

Thug Boss
Add a photo to this gallery

Retrieved from "https://sanctuary.fandom.com/wiki/Monsoon?oldid=22282"
Community content is available under CC-BY-SA unless otherwise noted.