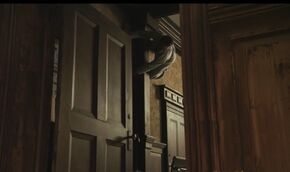 Will develops some interesting abilities.

"Metamorphosis" is the fourteenth episode of the third season of Sanctuary, and the fortieth episode overall in the series.

Will is uncharacteristically absent from the morning team meeting. His reason for not attending has him literally climbing the walls.

Will wakes up (and the episode is consequently all filmed though Will's POV, as if the camera were his eyes, i.e. we view what Will is seeing) when Kate summons him to the morning staff meeting. He is distraught and arrives late for the meeting, but the matter is soon forgotten when the team are startled by his face. He is brought to the lab, where Dr. Magnus examines him, saying that he has "something" on his face. Will asks if he can see it; Henry hands him a mirror, which shows that the skin on his cheek is changing into something seemingly scaly, perhaps reptilian.

Some time later, Dr. Magnus returns to the lab, informing Will that the DNA tests have been inconclusive. She asks him if he did anything unusual in the past week, but he cannot remember anything. More tests need to be conducted, and in the meantime, he has a lot of reports to work on.

Will runs around in the Sanctuary, and is mocked by the rest of the team. Magnus informs him that she has found spores from a Cillobar, a plant-animal hybrid that's changing his DNA one cell at a time. She is working on a cure.

After taking a nap, Will wakes up to find his body even more transformed, having spread to his hands, arms and feet. After finding his fingers somewhat sticky, on a hunch he walks to the wall and easily climbs up to the ceiling like a gecko. Kate arrives, and is shocked on finding him hanging from the ceiling. Magnus again examines Will, and gives him a mild antimetabolite. She tells him not to worry, but he's not convinced. Meanwhile, Henry has a job for him: he's asked to change a light bulb on a high hanging chandelier in the hall. Will goes right to it, but quickly finds the light streaming through the window far too bright, and as the light hits his hands he loses adhesion and falls to the ground.

Back in the lab, Magnus explains that Will has developed a sensitivity against ultraviolet light, his hands erupting in white boils where 'burnt' by the light . While the team begins to cover the Sanctuary's windows, Magnus discovers that the creature that infected Will is in fact from Hollow Earth.

Magnus tells the team that Will picked up a spore from a plant-animal hybrid native to Hollow Earth. She orders Henry to find a way to get in touch with Ranna Seneschal, the leader of the Hollow Earth city of Praxis.

Kate comes to see Will, and tells him that Abby Corrigan called and asked about him. Will is not sure if he wants his girlfriend to see him in his current condition. Kate promises to take care of it. Limited to the Sanctuary grounds, Will is frustrated that he cannot join missions any more. Bigfoot invites him to a secret room, his private refuge where he refines whiskey. Soon, the two are drinking together with the Two Faced Guy, and they tell Will how frustrating it can be to listen to the team going on about their latest mission. Will does not believe this until he himself has to suffer through Henry and Kate bragging about the adventure he just missed out on.

Will's metamorphosis continues, he can now easily climb the walls of his room and is delighting somewhat in his 'spiderman-like' abilities. Kate has to feed him because he can no longer control the grip of his hands with his now large talons. In the meantime, Henry has found a way to send a message to Praxis. To their surprise, it is answered almost instantaneously, with an advise to terminate the infected subject immediately. When Henry writes back that the "subject" in question is Will, another message reads: "Forbidden communcation under_ Senate Authority. Kill subject immediately."

Walking on the ceiling and eavesdropping, Will overhears Magnus and Bigfoot discussing his case where Magnus is frustratingly losing hope. Later on, he asks Magnus to dial a number for him on the phone, and leaves a message on his father's answering machine, telling him to get in contact with Magnus when he receives the message. He then looks at his reflection on his computer screen: by now, he looks almost completely reptilian and increasingly aggressive .

Will has a dream in which he chases himself, unchanged, through the Sanctuary and ends up throwing himself off from the highest tower into the sea. When he wakes up, he panics, realizing that he has lost the ability to speak, now only managing grunts. Magnus sedates him. When he wakes up again, he is even more agitated, and attacks Kate injuring her arm. Before he can hurt anyone else further, Bigfoot overwhelms him. The team puts Will in a security cell.

Henry comes to see Kate, who tries to distract herself by doing some filing. She tells him that she has not lost anyone important in a long time, and that she does not know how to deal with it.

Magnus is in the lab when Bigfoot arrives and tells her that she must accept the fact that they have lost Will. She angrily orders him to leave her alone, to which he replies that she should stop "putting up a show". This remark gives Magnus an idea: she tells Henry to put up Ranna's message again. They notice the underscore in the message, and realize that Ranna must have tried to send them another message that the Senate would not approve of. They replay the interference sent with the message, they'd noticed previously; it turns out to be the word "Gooban", written in Morse code.

The data Nikola Tesla extracted from the Holographic City reveals that Gooban was a scientist who hundreds of years ago managed to resurrect a dead mushroom species. Magnus thinks that by using his technique with a sample of Will's original DNA, she can cure him.

Henry and Kate go to get Will, but they only find a hole in the wall of his cell. They enter, but Will actually hides on the ceiling attacking them once they are in his reach. When Magnus and Bigfoot arrive, he is long gone.

The team goes hunting for Will, and Magnus makes it clear that if they are unable to capture him, they must be prepared to kill him in order to protect Old City from further contamination. They spread out, and Magnus eventually comes upon Will in a warehouse. He attacks her, but she is able to sedate him just in time.

When Will wakes up several days later, he is on the path to full recovery. He tells her how hard it was to see them all slip away. However, he points out that the super strength or the ability to climb up walls could be useful, but Magnus just walks away on the notion.

Will Zimmerman and Bigfoot

Retrieved from "https://sanctuary.fandom.com/wiki/Metamorphosis?oldid=17230"
Community content is available under CC-BY-SA unless otherwise noted.