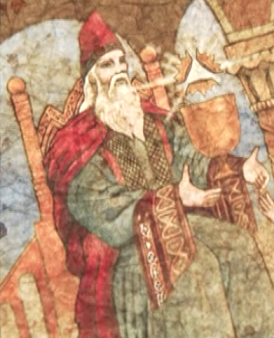 Merlin was a legendary British sage and alleged wizard, considered by many to be the most powerful man in Britain at his time.

According to the Arthurian legends, some knights who were rejected from King Arthur's court, desperate to prove themselves worthy, accepted a hideous task from Merlin, fighting the dark forces unleashed by the wizard's nemesis, Morgan Le Fay. Through this, Merlin was also indirectly involved in the rise to power of the Cabalis Nocturnum.

Merlin recognized the Morrigan, who were created by Morgan as a means to restore balance by discouraging Arthur's armies, as Morgan's strongest weapon. He somehow brainwashed them and turned them against Arthur's enemies, causing them to wreak havoc among the Saxons.

Once the battle for Britain was won, Merlin locked the three witches away in a crypt on a deserted island, and created an army of ghouls to guard them for eternity.[1]

Retrieved from "https://sanctuary.fandom.com/wiki/Merlin?oldid=7389"
Community content is available under CC-BY-SA unless otherwise noted.