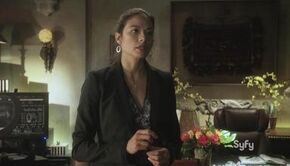 Dr. Lilian Lee is the chief of the United Nations Security Team.

She speaks four languages, and holds degrees in international law and finance. She also served as the American envoy at a G20 summit.

Shortly after the discovery of Hollow Earth, Lee scheduled an inspection of the Old City Sanctuary with Helen Magnus. In light of several events involving Abnormals in that same year, Magnus wanted to give her a perfect welcome. However, that plan did not go well, as a pinepex found its way into the facility at the same time, causing the Sanctuary team and Lee to violently attack each other.

Later on, Magnus and her team tried to convince Lee that she just bumped her head when exiting her taxi, but she partly remembered the earlier events and demanded to know the thruth. They told it to her, and also showed her footage of herself shooting at them. Embarrassed, she decided to let the whole event go unreported, and joined the team for a tour of the facility.[1]

Some time later, she contacted Magnus to inform her about a group of abnormals from Hollow Earth reaching the surface in South Dakota. She gave the Lotus Defense Corps control over a camp for the newcomers, and later witnessed violence breaking out and a number of abnormal invasion armies surfacing from vulcanic calderas in Chile, Indonesia, and Russia.[2]

Retrieved from "https://sanctuary.fandom.com/wiki/Lilian_Lee?oldid=11090"
Community content is available under CC-BY-SA unless otherwise noted.