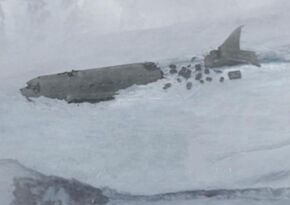 Returning with an Abnormal captured in the Himalayas, Magnus and Will are stranded from civilization and aid after their plane goes down in a desolate mountain range. While anxiously waiting for a rescue team, the surviving passengers begin to fall victim to vicious and deadly attacks throughout the night. It becomes chillingly apparent that surviving the cold is the least of their worries and no one, not even Magnus and Will, is above suspicion.

Dr. Helen Magnus dreams of a night in late 19th Century London, when she and then-lover John Druitt went out celebrating. Druitt eventually proposed to her in a carriage, much to her surprise. In that moment, Dr. Magnus wakes up and finds herself and Dr. Will Zimmerman along with some other people in a plane that has crashed on a snowy mountainside somewhere in the Himalayas.

Will, Helen, and Allison

Dead Magoi
Add a photo to this gallery

Retrieved from "https://sanctuary.fandom.com/wiki/Kush?oldid=22142"
Community content is available under CC-BY-SA unless otherwise noted.