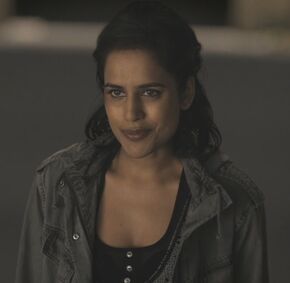 Kate Freelander is a human con artist with Cabal connections.

She has a huge knowledge of the Cabal's strategies, and was able to help the Sanctuary Network in finding them. She has now taken sides with Sanctuary, replacing Ashley Magnus.

Kate was born in Mumbai,[2] and raised in Chicago. Her father was a lock pick who was killed by a bomb, planted by Jimmy, when he wanted to sell out his gang to the police. Kate was eight at the time, and witnessed the explosion with her mother, who went into labor and gave birth to a son, Thad. The family eventually left Chicago and traveled around until Kate's mother decided to return to her native Mumbai and Kate moved to Montreal.[3]

Kate worked as a freelance operative for the Cabal for several years, having some close contact with their chief of operations, Dana Whitcomb. Eventually, she was hired to assist in the abduction of Martin Wood, one of the orphans who had been genetically "cleaned" as part of Project Montana. However, Dr. Helen Magnus and Dr. Will Zimmerman surprised her at Wood's home, following her to the Vancouver docks where she was able to deliver Wood to the Cabal, but was herself taken by the Sanctuary team. Magnus interrogated her, but she was still able to get away by tricking Henry Foss.

Later, she called Dana Whitcomb to ask why no money had been delivered to her account. Whitcomb explained that she should not have let herself get caught, and that their business relationship was terminated. Moments later, Cabal snipers tried to take her out, but she managed to get away. She made her way to the Old City Sanctuary, where Dr. Magnus attended to a wound in her leg.[4]

During her recovery, Kate used her insights to help the Sanctuary team prepare for the attack by the Cabal's Super Abnormal soldiers. Magnus still didn't trust her and wanted her gone, but Kate stayed and saved Magnus' life when genetically modified Ashley Magnus tried to kill her.[5]

In the aftermath of Ashley's death, Kate wanted to leave, but then learned that the Sanctuary team was in possession of a number of dead Stenopelhabbilis, whose tusks are very valuable on the black market. She decided to steal them, but instead freed the deceased creatures' offspring, which got away. Kate then helped Henry Foss to hunt the young abnormal down, only to discover that it has come to consider her its mother. She named it Ralphie and decided to stay with Sanctuary for now.[6]

Some time later, Kate had to help her brother Thad who got involved with a crime boss named Constantine. She eventually had Constantine killed by the Sorkel in the Sanctuary, and word was spread that anyone who dared harm her loved ones would suffer the consequences.[7]

Shortly after the destruction of Praxis, Kate met a Herusan artist named Garris who soon became a leader among the Abnormal refugees on the surface. When he decided to return to Hollow Earth and rebuild, she joined him, having obviously fallen in love with him.

In the alternate timeline created by the Guardian, Kate and Will Zimmerman have a son named Magnus Zimmerman. She is killed in battle against the infected.[8]

With experiences from her years as a Cabal and Sanctuary operative, Kate is an excellent hand-to-hand combatant, able to take down three rioting Praxian abnormals. She is also shown to be an expert marksman.

Dr. Helen Magnus
Like Will, Kate soon begins to rely on Dr. Magnus as a mentor. The head of Sanctuary encourages her to face her emotions and rethink the decisions she has made in life, and convinces her that she alone can make her life what she wants it to be.[9]

Dr. Will Zimmerman
There are several hints that Kate is romantically interested in Will; she is far more distraught by his apparent death during his connection to Kali than the others[10] and does not want him to think badly of her.[11] When Will is in danger of losing his humanity by being transformed into a Cillobar, Kate talks to him alone and is about to confess something very personal to him, but at that moment his girlfriend, Abby Corrigan, calls and Kate promises Will to "take care" of the call.[12]

Garris
Shortly after the destruction of Praxis, Kate met a Herusan artist named Garris who soon became a leader among the Abnormal refugees on the surface. When he decided to return to Hollow Earth and rebuild, she joined him, having obviously fallen in love with him.[13]

Kate Freelander
Add a photo to this gallery

Retrieved from "https://sanctuary.fandom.com/wiki/Kate_Freelander?oldid=21688"
Community content is available under CC-BY-SA unless otherwise noted.