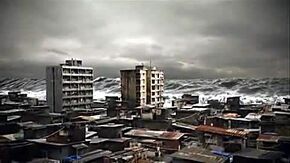 "Kali, Part III" is the first episode of the third season of Sanctuary, and the twenty-seventh regular episode in the total run of the series. It concludes the events of the previous episode, "Kali, Part II".

Magnus risks her life to save Big Bertha from Terrence Wexford, and a tidal wave threatens the coast of Mumbai, India. Meanwhile, Will's life hangs in the balance as he tries to reach out to Kali by re-establishing his mental connection.

After their ship has been hit by the tidal wave caused by Big Bertha, Henry awakes on the deck with an injured head; half the ships are sinking, and Magnus tries to convince Terrence Wexford to concentrate on the rescue operation. Wexford, however, goes after Big Bertha. Magnus warns Kate, who is taking care of an unconscious Will, about the approaching wave, and then uses her helicopter to keep the ship from firing and try to lure Big Bertha back into the ocean. The abnormal becomes enraged, and releases an electromagnetic burst that renders the ship and Magnus' helicopter useless; Magnus crashes into the ocean.

At a video conference, Wexford informs Declan MacRae and Bigfoot that Magnus is missing, and that he will further pursue Big Bertha.

In the Mumbai Sanctuary, Will wakes up and is informed about the tidal wave. He soon tries to restore contact with Kali. Meanwhile, Kate informs the responsible minister of the Indian government about what happened, and Tsunami warning sirens are started all over Mumbai.

On the ship, Henry accuses Wexford of being responsible for Magnus' death. The new head of the Sanctuary Network rebuffs him, and orders him to restore contact with Big Bertha's targeting beacon and the ship's targeting systems. At the same time, Edward Forsythe experiences discomfort after his connection with Bertha.

Kate goes looking for a young boy, but just when she finds him among a group of older people the tidal wave hits the city, crushing the humble buildings of the poor.

Forsythe is asked to come on deck by one of his men, and finds Helen Magnus, who has just been fished out of the water. She soon overwhelms one of the guards and orders Forsythe at gunpoint to re-connect with Big Bertha via the Makri. However, he informs her that the little creature died an hour ago, dooming him as well.

Kate and the boy have survived the wave; Mumbai has turned into a disaster area. Most of the residents have been able to evacuate to higher ground thanks to Magnus' warning, so the loss of life is limited. The wave, however, is still on its way to other coastal areas.

Magnus and Forsythe talk to Rheka to find out if there is a way to restore communication with Kali. Will soon learns by phone that there is; Kali will talk to a former host one final time, "at the gates of the spirit realm". In order to contact her again, Will must die.

Magnus explains to Will that they will artificially induce cardiac arrest in order to simulate his death. Will is ready to do it, as he thinks he is doomed anyway now that the Macri has left him. Forsythe is of little help, as he

Next, Magnus contacts Wexford, who refuses to give her some more time before going after Bertha. Angrily, Wexford wants Henry removed from the bridge, causing Henry to partially transform to his HAP form and attack him. Wexford now reveals his abnormals power, flaring his neck frills and spitting acidic saliva at Henry's face, rendering him harmless. Once in his cell, Henry uses his tech skills to send Magnus the location of Big Bertha.

Meanwhile, Will wants to talk with Kate about his last wishes, but she angrily refuses to even think that way. The artificial cardiac arrest is induced on Will, leavin him "dead". He finds himself on a golden field, with Kali nearby. As he tries to reach her, a large gorge opens between them. Kali simply walks over it, making Will realize that a "leap of faith" will be necessary. However, it does not work out as planned, and Will falls into the abyss. Kate and Ravi try to revive him, but with no effect. In the spirit realm, Will lands in a room where Kali and several other mysterious figures are awaiting him.

Will asks where he is and who the others are, and pleads for Kali's mercy. He explains that he is beginning to understand how deeply she is connected to the world around them, and that he desperately needs her now. Kali attempts to grant him his wish.

Magnus and Forsythe witness Bertha coming out of the water. The Sanctuary ship arrives, and red algae concentrate along the endangered coastline. Magnus tries to reason with Wexford again, but he says he will fire on her. Forsythe decides to make everybody else leave, and use his ship to keep Wexford away from Bertha. The Sanctuary ship fires on Forsythe's vessel, destroying it. Moments later, Magnus destroys Wexford's tactical systems with a bazooka; he angrily releases the remaining missiles, hitting Bertha and causing her to plunge back into the ocean.

Will pleads to the other figures in the room to save his world. They disappear, and Will awakes back in the Sanctuary.

Magnus and Forsythe's men commandeer the Sanctuary ship; the crew refuses to defend Wexford's authority any further. Magnus finally makes Wexford realize what he has become. Soon, a number of land-based earthquakes cause three counter waves that neutralize the first one. Magnus orders the captain to set course for Mumbai and collect the remaining life boats.

Back at the Old City Sanctuary, Magnus tells Will that he is completely healthy again. She asks him if he can tell her what happened while he was "dead", but he says he cannot remember anything. The circumstances of their rescue remain mysterious.

Retrieved from "https://sanctuary.fandom.com/wiki/Kali,_Part_III?oldid=16047"
Community content is available under CC-BY-SA unless otherwise noted.