Start a Wiki
Kali, Part I 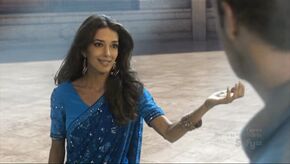 Kali, as she appears to Will

"Kali, Part I" is the twelfth episode of the second season of Sanctuary, and the twenty-fifth episode overall in the series.

It is the first part of the two-part Season 2 finale.

After receiving vital information from the head of the Tokyo Sanctuary (TATUYA ISHII), the team starts a worldwide investigation that could have alarming global consequences. Magnus, Will and Kate travel to Mumbai, India to investigate a murder and connection to the Cult of Kali, an ancient cult whose followers can foretell disaster. But when Will falls ill and then disappears, Magnus knows they are dealing with something extremely powerful… and Will is somehow linked to the mystery.

A young man and an elderly woman named Rheka flee from several other men through the slums of Mumbai. The man tells the woman to come back later and retrieve "it". She leaves, while he opens what appears to be a shrine of a goddess. He then opens his mouth, from which a small spider-like creature appears, emitting some kind of shockwave and then disappearing into the shrine.

The man then runs away and is soon caught by the other men, whose leader commends him for his willingness to die for his god. They leave, but not before killing the man.

Dr. Helen Magnus and Dr. Will Zimmerman meet with Onryuji, the new house head of the Tokyo Sanctuary, in Japan. He informs them that Suki, a giant, normally docile lizard creature, has run amok in the city and had to be sedated and brought out of the city. Henry Foss calls in and sends them photos of a Pteranodon in the sky above London.

At the UK Sanctuary, Declan MacRae and his team have been able to catch the dinosaur, who is still very aggressive. Magnus wonders if the incidents might be connected. A video conference with the house heads and several experts is held; it is determined that the cause of the renegade abnormals cannot be the Lazarus Virus. Terrance Wexford advises a global alert, but Magnus disagrees. Further reports come in, but Magnus insists on remaining calm and monitoring the situation. After the conference is over, Magnus and her team are informed of the Kali worshipper who has been killed in Mumbai.

While Magnus observes the remains of a Giant Sand Ray in the Egyptian desert, Will and Kate Freelander are sent to India to investigate, and meet with Dr. Ravi Ganapathiraman, the local Sanctuary representative. He brings them to the crime scene, where they determine that the killers carried military grade guns and wore expensive boots. They also find the shrine the victim had opened, and Will is able to open it. He removes a small statuette from it, not noticing that Rheka is with them.

In Egypt, Magnus determines that the sand ray was in pain. She also talks to Pili, the local house head, about Wexford, who seems to greatly enjoy his position of authority.

Back in the Mumbai Sanctuary, the spider-like being slips into Will's clothing and later, while he sleeps, crawls into his mouth.

On the following morning, Kate wakes Will, who is distraught and still tired. Ravi informs them that their murder victim was a human, but was over two hundred years old.

The men who hunt for the spider creature find out that Sanctuary is likely in possession of it.

Back in London, Declan informs Magnus that the situation in most Sanctuaries seems to be calming down. They determine that as the incidents happened all over the world at the same time, some specific and very powerful impulse must have triggered them. Henry soon detects data of an EM pulse originating in Mumbai, making it seem likely that the Cult of Kali was involved.

In the streets of Mumbai, Will experiences a vision of a beautiful young woman in a blue dress who runs away from him. He follows her, but she disappears. Will then faints, and is hidden by the old woman and another cultist, just seconds before the hunters show up again.

Magnus has arrived in the Mumbai Sanctuary. A search for Will is launched, with an angry Kate also looking on her own. Meanwhile, the hunters also learn of Magnus' arrival.

In a shed in the slums, Will taken care of by the old cultist, Rheka. He has visions of a huge and beautiful temple, and again sees the beautiful woman in blue. She inquires what happened to him and if he is well, but he doesn't know what to answer her.

Magnus discovers that the small spider creature is a Macri, a genetic cousin of the powerful sea-dwelling abnormal known to most Sanctuary employees as Big Bertha. Ravi recalls that she was killed by Magnus four years earlier, but Magnus reveals that Big Bertha is, in fact, alive.

An angry Ravi demands to know why Big Bertha was kept alive, to which Magnus replies that in her personal experience, killing a creature of such magnitude would destabilize the balance of nature in its habitat. That is why she was hidden away in a special containment field at the bottom of the Indian Ocean.

Will wakes up in Rheka's shed; she explains that it is a great honor to be "chosen" by the Macri, and that he is not yet ready for it. It allows him to see Kali, the Hindu goddess of eternal energy. Suddenly, the hunters arrive and take them away.

Wexford calls Magnus and tells her that people are beginning to question her judgment. Also, Henry informs her that Big Bertha responded to the EM pulse from Mumbai with another pulse that shifted the magnetic poles of the Earth.

Will is interrogated by Edward Forsythe, the leader of the hunters, who explains that he is a collector of "rare stuff". He also learns that the Macri is a connection to Big Bertha, who is in fact Kali. They then use a low frequency magnetic pulse on Will and the abnormal inside him, causing them both great pain.

Will shakes and screams as the magnetic pulse hits him. Eventually, the Macri exits his body and emits another EM pulse, which is detected by the Sanctuary Network. Forsythe then swallows the spider creature and enters a state of meditation to make contact with Big Bertha. Rheka tells him that the being must make the choice, but he ignores her and establishes contact.

At the bottom of the ocean, Big Bertha awakes. The Sanctuary Network tries to contain her, but Forsythe makes Bertha cause a powerful burst of energy, jamming the Sanctuary's sensors. He and his people then leave the warehouse with Rheka, leaving Will behind. Kate and Ravi arrive and take him back to the Mumbai Sanctuary. His body has been flooded with toxins when the spider creature was removed by force, and he is fighting for his life.

Dr. Will Zimmerman: Wow, I am, ugh, jetlagged. I think I better turn in, but why don't you do the autopsy, and we'll just go over the results tomorrow?

Dr. Ravi Ganapathiraman: [to Kate, after Will has left] I thought he was a doctor.

Kate Freelander: He is, just not the kind that likes autopsies.

and special appearance by:

Kate, Will, and Ravi

Will, Goon, and Forsythe

Will, Goon, and Forsythe

Retrieved from "https://sanctuary.fandom.com/wiki/Kali,_Part_I?oldid=19630"
Community content is available under CC-BY-SA unless otherwise noted.