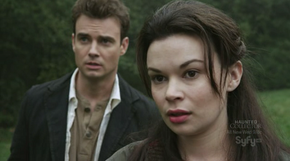 Josie was a young woman born in the French town of Carentan during the time when it was covered by a time dilation dome.

She had a knack for mathematics, and became Dr. Ravi Ganapathiraman's research assistant. When Dr. Will Zimmerman arrived in Carentan, it did not take long for her to fall in love with him; she even wanted to have his children after the next three-year dark time.

When she learned that Will's and Dr. Magnus' attempts to dissolve the dilation dome would remove her and all other born in it from reality, she gathered a mob to stop them, even pointing a gun at Will. When Magnus pressed the button on the device that would dissolve the dome, Josie fires at Will, but hit Ravi, who jumped in the way, instead.

The dome collapsed, causing Josie to never have existed.[1]

Retrieved from "https://sanctuary.fandom.com/wiki/Josie?oldid=21582"
Community content is available under CC-BY-SA unless otherwise noted.