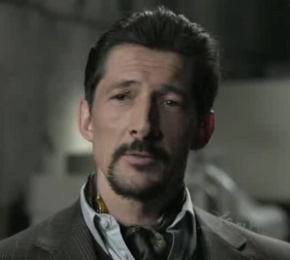 He was the actual model for Sir Arthur Conan Doyle's Sherlock Holmes.

James Watson attended Oxford University where he was a member of The Five alongside his classmates Helen Magnus, John Druitt, Nikola Tesla and Nigel Griffin. He participated in the experiments with the Source blood and received an injection of the blood. The injection gave Watson vastly enhanced intelligence and intellect. After leaving Oxford he joined Helen in her studies on abnormals.

At the request of former classmate Adam Worth he and Magnus were able to diagnose Adam's daughter Imogen with a rare form of leukemia and they attempted to treat it. However they were unsuccessful and Imogen would succumb to her illness.

He devoted considerable effort towards solving the "Jack the Ripper" murders. He would often discuss the case with his friend John Druitt over brandy, unaware that Druitt was the man he was hunting. The revelation that his friend was behind the gruesome murders left him deeply hurt and resentful toward Druitt.

When the Prime Minister gathered the members of The Five at the request of King Edward VII in order to hunt down Adam Worth, Watson was the first to refuse the offer telling them to "go to hell". He, like the rest of The Five eventually accepted the mission after the promise of government backing for the Sanctuary Project he and Helen had been working on.[1]

Once the Sanctuary Network was up and running, Watson had the position as House Head of the UK Sanctuary, the second-senior branch of the entire network. He invented a mechanical system which was able to extend his lifespan to about 160 years.

When the Cabal unleashed the Lazarus virus, he joined the surviving members of the Five in order to retrieve the vial of the source blood from the ruins of the ancient vampire city of Bhalasaam. During the mission, he reconciled with his old friend Druitt. However, shortly after recovering the vial of source blood, the mechanical system which kept him alive failed, causing him to rapidly age and die within minutes. With his dying breath, he made his final brilliant deduction, telling Will that finding the blood was too easy and that something was wrong.[2] [3]

Retrieved from "https://sanctuary.fandom.com/wiki/James_Watson?oldid=15817"
Community content is available under CC-BY-SA unless otherwise noted.